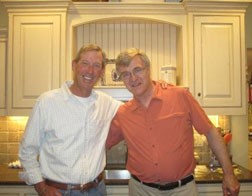 In Wisconsin, many of our cheesemakers have roots that run deep. Sid Cook, of Carr Valley Cheese, is a fourth generation Master cheesemaker, and has won more national and international awards than any other cheesemaker in North America. Sid began working in his family’s cheese plant when he was 12 years old, and received his cheesemaker license when he was 16. He currently operates four cheese plants, seven retail stores, and a cooking school, spread across central and west central Wisconsin.

Sid has created hundreds of cheeses over the past 40 years, and currently produces eighty different cheeses, of which 50 are his original creations. Although most of his cheeses are the result of his cheesemaking knowledge, there have been a few that were accidents. One in particular is Creama Kasa, a triple cream semi-soft beauty coated in blue wax. An agitator, the device that stirs the milk in a cheese vat, broke while they were making one of his cheeses. The result of that mechanical failure was that the butterfat was not separated and removed. Sid gave the go-ahead to continue making the cheese, and, voila, a new triple cream cheese was created. Creama Kasa has now become of our top selling cheeses at Schoolhouse Artisan Cheese.

Sid has also become an industry leader in mixed milk cheeses, combining cow, goat and sheep milk. Some of his cheeses have two different milks, while others have a combination of all three. Some of our favorites are Caso Bolo, a very unique cheese made into a three-pound ball and coated with yellow wax. This cheese is made with all three milk types, and cellar aged for up to three years. Another of our favorites is Mobay, a semi-soft cheese that has both goat and sheep milk, separated by a line of grapevine ash. This cheese was inspired by the French cheese Morbier, which mixes goat and sheep milk together, then the entire wheel is covered in grapevine ash. Mobay is a great cheese to serve on a cheese board because of its very distinct look, and the gentle flavor of the cheese.

Considered one of America’s most innovated cheesemakers, Sid has also been known for naming the cheeses he creates. Baraboo Blue was named for a city near one of his cheese plants. Bessie’s Blend, an aged goat and cow’s milk cheese, was named for a secretary. Sid admits, “We just ran out of names that day.” He has also named cheeses after his family, including his daughter Marisa. In fact, Sid describes his Cave Aged Marisa, a seasonal cheese made with sheep milk, much as he describes his daughter – sweet and slightly rambunctious.

Over the past several years I have gotten to know this interesting man, and have visited many of his cheese plants and retail stores. He is without question, the most enterprising cheesemaker I have ever met. His passion for creating unique cheeses shows in the work that is produced.

Sid will be coming to Door County for a “Meet the Cheesemaker” event at Savory Spoon Cooking School on Aug. 27 at 6 pm. This gives people a chance to meet him and learn more about what he does in the fast moving world of artisan cheese. Many of his award winning cheeses will be showcased, along with a sampling of craft beer and wine. For more information about this special event, visit savoryspoon.com or call 920.854.6600.