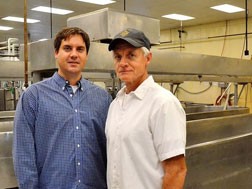 Over the past several years, I have been very fortunate to have met a number of cheesemakers here in Wisconsin, as well as a number of influential individuals in the dairy industry. As we all know, Wisconsin is the leader in not only the production of cheese, but also dairy science. This past fall I was told that I needed to meet the family at Springside Cheese near Oconto Falls.

My wife Janice and I visited the cheese plant in January, located near the village of Spruce, west of Lena, 10 miles from Oconto Falls. We met Master Cheesemaker Wayne Hintz and his son Nathan, and were given a tour of the factory and cheese store.

Wayne grew up on a dairy farm near Green Valley (Pulaski area) and learned to make cheese when he was 16 at the Krakow Cheese factory. He married a girl that came from a long line of cheesemakers and in 1973, with the help of his father-in-law, purchased the Springside Cheese factory. The original factory was built in the early 1900s, and by the early ‘70s Wayne decided they needed a newer, larger factory. In 1982 they built the cheese plant that is in use today.

Springside Cheese buys its milk from eight small local family dairy farms. They are known for their award-winning Bandaged Cheddar but make many other varieties of cheese and produce excellent cheese curds. The day we were there, a very cold winter day, the door never stopped opening while locals came in to buy cheese and cheese curds and believe me, the factory is in the middle of the county, not on a busy highway. We sampled a number of cheeses and were very impressed.

This spring, I called and spoke with Nathan and asked him the following question: “If you were to pick two cheeses that you make, which two would they be?” I said that I was going to buy at least 40 pounds of each. I can assure you I have never done that before and he tells me that no one has ever asked him to do what I asked.

He asked me if he could think about it for a day or two and I said, sure, no problem. Two days later he called and said he had picked the two cheeses: a medium aged Cheddar and Krakow.

Ok, the cheddar I get but what the heck is Krakow? He said it was a Polish style, original recipe that they were just beginning to make. I asked a few questions and then gave the OK to send the two cheeses to me, no samples needed. Did I just buy two cheeses I had never seen or sampled? Yes, I did. First time ever. I am sure he was shaking his head a bit, but he wasn’t going to ask a lot of questions, just sell the man the cheese.

I received the cheese in late April and I must say I was very impressed. The Cheddar is classic Wisconsin Cheddar and the Krakow is a truly unique, semi-soft beauty. I have since discovered that his father (Wayne) used to make a cheese called Podlaski, a Polish style cheese, at the Krakow cheese plant. The name of the cheese, Podlaski, was a play on words for the town of Pulaski. Because there are so many families of Polish descent in the area, the Krakow cheese plant produced a number of “Polish style” cheeses.

I had to ask, what is a “Polish style” cheese? I was told that they were typically milder, softer cheeses, not heavier flavors like so many other cheeses made in Europe and brought to America.

In the late ‘90s, Wayne’s other son Keith, also a cheesemaker, attended a short course at the Center for Dairy Research at the University of Wisconsin – Madison on Polish cheeses. He was interested in this style of cheese and the family decided that some day they might try making a few of these types of cheeses. Wayne had some experience making Polish cheeses but many of the cultures that they used 40 years ago were no longer available.

They began experimenting with some “modern” cultures in a small vat they have, and “voila!” they came up with this new cheese, Krakow, named after the first cheese factory Wayne worked at. They found that what they were making was softer and creamier than the cheeses made back in the ‘60s. They made their very first batch of this cheese in February of this year, and I was lucky enough to get it in April.

I sampled the cheese with John Witteborg, our cheesemonger/manager at our store in Egg Harbor, and we both agreed it was fantastic – creamy with a slight tang, but a sweet finish.

I feel that finding original Wisconsin cheese, and getting to know the story behind each of them, makes what I do so much fun. There are so many great cheeses being produced in this state; step up and try some for yourself. You will be happy you did.