Emmentaler is a true Swiss original. This style of cheese has been produced in the Alpine region of Switzerland for hundreds of years, and by one of the premier cheesemakers of Wisconsin. Bruce Workman, of Edelweiss Creamery in Monticello, Wisconsin, has been making Emmentaler for more than 10 years. Bruce has the distinction of holding the most Master Cheesemaker certifications of any cheesemaker in Wisconsin, 11 at last count. No other cheesemaker is anywhere close to having that many.

Emmentaler is typically made into 200-pound wheels and aged for anywhere from four months to three-plus years. The reason the Swiss cheesemakers made this cheese into such large wheels was very simple; back in the 18th century, the Swiss authorities began taxing cheesemakers on the number of pieces/wheels they produced, not the weight of the cheese. 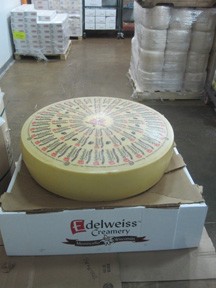 Known for its big “eyes” and nutty, sweet taste, Emmentaler is reputed to be one of the most difficult, if not the most difficult, cheese to make. Getting the right combination of cultures, cooking, brining, and aging of this cheese is very difficult. This is why most cheesemakers in America don’t even try to make this cheese, but rather a far different “American version” of a cheese they like to call Swiss.

During the mid 1800s, many Swiss immigrants came to Wisconsin, particularly Green County, in the very far southern portion of the state. Many of the Swiss were cheesemakers and by the early 1900s, there were more than 200 cheese plants making Emmentaler. Virtually every four corners in the county had a cheese plant.

The stories I have heard about how Swiss cheese got its name is simple; when the Swiss introduced Emmentaler to America, many of the locals could not pronounced the name so they just began calling the cheese “Swiss” because most of the cheesemakers were of Swiss descent. Today there are a number of cheese companies producing the “American version” of Swiss, but only one cheese plant producing Emmentaler, Edelweiss Creamery in Monticello.

I recently asked Bruce why he chose to make this style of cheese and he said he wanted to keep an old artisan tradition alive, handmade Emmentaler. Edelweiss makes a variety of other cheeses at their plant, including Butterk?se, Havarti, Gouda and a few other varities. Bruce started his cheesemaking career making block Swiss cheese for a large cheese company in Monroe.

When Bruce decided it was time to venture out on his own he really wanted to make traditional Emmentaler. He spoke to the owner of the cheese plant he worked for in Monroe, a Swiss himself, and this gentleman helped him find some specialized equipment in Switzerland, including a large copper cheese vat made especially for making Emmentaler.

Copper vats are no longer allowed to be used in the United States, but Bruce had his vat grandfathered when the U.S. Food and Drug Administration (FDA) decided they could no longer be used in cheesemaking. The rule made by the FDA was because they felt the public’s health may be at risk because of a miniscule amount of copper may be scraped and end up in our cheese (pretty funny based of the fact this material has been used by Swiss and French cheesemakers for hundreds of years and they have never had an outbreak of disease because of the copper vats used in cheesemaking).

Copper vats are used to make Emmentaler because this style of cheese is heated to a higher temperature than any other cheese, and copper is the very best conductor of heat for this purpose. The vats are also unique because they are nearly round and typically deeper than a conventional cheese vat. The cheesemakers used to use the vats as playpens for the young children when they were not making cheese that day. 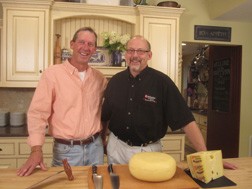 I have had the pleasure of visiting with Bruce at his cheese plant a number of times. It is pretty amazing to see Emmentaler made, especially when you consider that each wheel uses a ton of milk (no really, not a ton because that sounds cool, but literally a ton of milk – 2,000 pounds).

After the cheese is pressed to extract the whey, it goes into a brine tank (heavy salt water) for three days, then is removed and spends the next week in a drying room. The cheese is coated with a breathable poly coating (to prevent unwanted molds on the cheese), then onto the “warm room” for the next eight to 10 weeks.

The “warm room” is usually 70-74 degrees and is where the cultures used in this cheese work their magic. While the cheese begins the aging process in the “warm room,” it is flipped over and cleaned two to three times a week. OK, picture “flipping” over and cleaning a wheel a cheese that weighs 200 pounds. Sounds like fun, right?

After two months of curing in this warm environment, the cheese is moved into a much cooler aging room. After four months, this cheese is relativity mild and somewhat sweet. By the time it is closer to a year old it becomes very nutty and a bit sharp. As it continues to age it becomes much sharper and develops a very full flavor.

Many times when we cut into a large wedge of this cheese and let it sit for a few minutes, it begins to “weep” through its eyes. This is caused by the weight of the cheese pressing the water out. It is really not water as we know it, but rather the sweet liquid that has been captured in the body of this huge wheel.

When you taste the liquid that is weeping through the eyes it is very sweet at first, but after hitting your tongue for a few seconds it turns very bitter. The nutty flavor of this cheese is unlike any other cheese I know and I feel we are so lucky to have such an artisan as Bruce Workman sharing his creations with all of us.

As I have said many times in the stories I tell, the only way for each of you to experience all the great cheeses made in our home state is to get out there and try some – you will be glad you did.