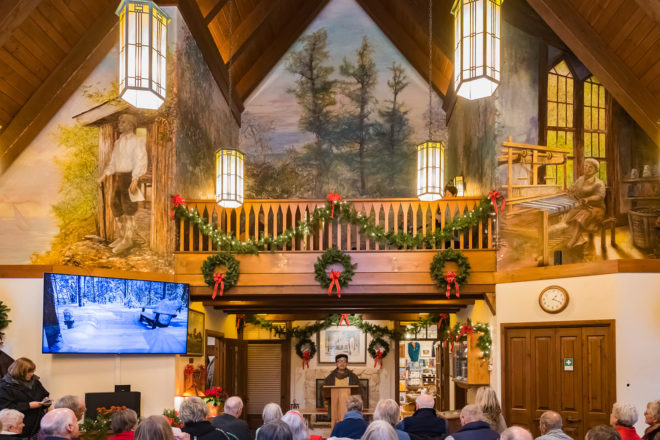 The new mural by Ram Rojas spreads across the walls around the balcony of The Clearing’s Jens Jensen Visitor Center. Photo by Len Villano.

Since this past spring, muralist Ram Rojas has been working on a mural at The Clearing in Ellison Bay, and just completed it in early December. About a week after he completed the mural, Mike Schneider, executive director of The Clearing, organized a ceremony to unveil the new mural on Dec. 20. When Schneider stepped up to the podium to introduce Rojas, he said he didn’t know if 10 people or 50 would show up for the ceremony, but, as a testament to The Clearing’s following in the county, it was definitely the latter. The main room of the Jens Jensen Visitor Center was packed with an enthusiastic and appreciative crowd.

Rojas began talking about the murals by saying how much The Clearing, a year-round folk school in Ellison Bay, means to him, and that there are bonds formed in that environment that are hard to recreate. “I think it’s one of the best schools in the United States,” he said.

The mural occupies five walls around the balcony space in the visitor center. One wall depicts Jens Jensen, a renowned landscape architect and founder of The Clearing, standing outside the Cliffhouse. The main back wall depicts the iconic three pines that are west of the main lodge, and the two side walls depict the forest edge looking down to the three pines. The other side of the mural depicts Mertha Fulkerson at her loom. Fulkerson helped Jensen establish the school and kept it going after his death.

Rojas said that every mural has different challenges, and this one was challenging because of its layout with five walls. This challenge was eased when a donor funded the sketches. He then had a lot of time to study and prepare detailed sketches. “When I got to paint here, I just got to focus on the emotions,” Rojas said.

One of the other challenges in all murals, is getting the details right. In this mural, one of the more challenging aspects for Rojas was getting the facial expression of Fulkerson right.

“I did a lot of research on her. She was a quiet person. Mike [Schneider] gave me a book of notes she wrote while at The Clearing. I sketched Mertha in so many ways. She’s iconic to this place, and I had to find an expression of hers that I liked. I wanted her to be happy about her medium,” said Rojas.

During the same time he was studying Fulkerson and trying to capture just the right expression for her, Rojas went to a slideshow presentation by Charlotte Lukes and saw a picture of Emma Toft with Fulkerson. When he saw it, he thought, “That’s the picture.” He called Lukes shortly after the program to see if he could use the photo as a reference for the mural. He said, “That’s how a mural comes together.”

Rojas said these final remarks, “My goal is to contribute to something fantastic, to this institution, this school. I couldn’t be more proud.”

For these final words and the reverence he paid to the school’s history in this mural, Rojas received a standing ovation.

To see the mural, visit the Jens Jensen Visitor Center at 12171 Garrett Bay Road in Ellison Bay. The visitor center is open on weekdays from 8 am to 4 pm.