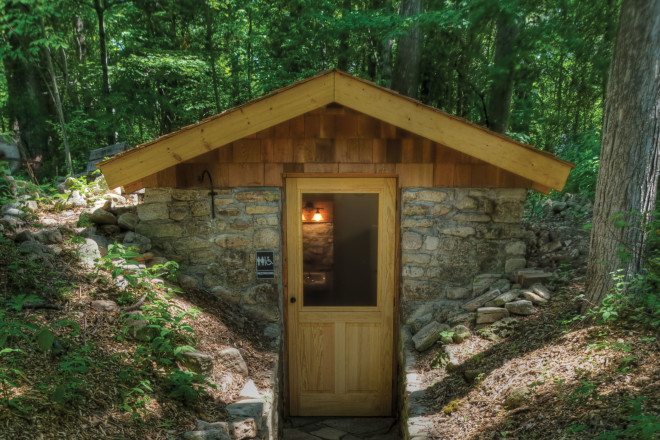 About a half mile off Highway 42 on Garrett Bay Road in Ellison Bay is the well-hidden driveway into The Clearing Folk School with a sign that says, “Student Entrance.” On weekend afternoons you’re welcome to turn in. You’ll be on a twisty, tree-shaded drive that forces you to slow down and enjoy the scenery. Get out of your car and you realize that you are in a very different place. You hear birds and the wind in the trees, no traffic, no cell phones.

Picture an 87-year-old man swinging a pickaxe to carve a root cellar on the grounds of The Clearing. 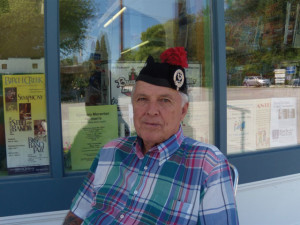 Though it’s nearly unimaginable, you would have seen just that in the summer of 1947 if you had been around back then. Jens Jensen found the perfect location for a root cellar in the ancient beach ridge, more limestone than soil, across the path from the kitchen, so he dug right in. The Root Cellar was the last project that the Danish founder of The Clearing worked on before his death in October of 1951.

“It had to have been a gruesome job to dig it out,” said Mike Schneider, the current Executive Director of The Clearing, “and I know just what he did with what he dug out. He didn’t move it far. I cleared brush from around the entrance to the Root Cellar on my knees, and that area’s one big heap of rock shards.”

Jensen laid the first few courses of the Root Cellar walls and discovered that the stones were too heavy, so he asked Wilson Richardson, his assistant Mertha Fulkerson’s nephew, to help. Wilson was home from serving in World War II and he was happy to lend his muscle to the project.

“Mr. Jensen would point to a rock,” Richardson said, “saying ‘that might fit’ and I’d put it up there. He’d take a look, shake his head, and say, ‘no, no, try that one’ and he’d point to a different one. It took a while.” Richardson said he and Jensen worked together and built the wall to head-height before the younger man had to return home to Illinois.

“The next time I came up to visit Aunt Mertha, Mr. Jensen had gotten someone to put logs across the top of the walls, cover the logs with plywood sheathing, and lay sod over the top.”

Once the roof was on and the door fitted, Mertha would order a season’s worth of potatoes, onions, and carrots to be stored in bags in the cool dampness. The bags sat on the dirt floor under shelves of canned foods. There surely was a path worn between the kitchen and the root cellar.

In the early 1980s the Shingle Shack was built over, but not connected to, the Root Cellar. The small building was originally meant to be another room for students but hooking up water and sewage proved to be too expensive, so it became The Gallery in the Woods, a bookstore and gift shop run by Jean DeWalt. After the Jensen Center was built in 1997, the bookstore and gift shop moved over there. A refrigerator was installed in the Shingle Shack for students to use and a few snacks were available for sale (not that anyone is ever hungry between meals at The Clearing) leading Mike’s young children to change the name to Snack Shack. The name stuck.

By the time Mike Schneider became Executive Director of The Clearing in 2000, only junk, garden hoses, and spiders lived in the Root Cellar, but he was eager to return it to its early usefulness.

Years passed and a computer and printer were added to the Snack Shack for the convenience of the many writing students on campus. Candy bars, sodas, and snacks were phased out to be replaced by bottled water in the fridge. Underneath, the Root Cellar remained a haven for spiders.

For years the West Dorm rebuild and building the Workshop took precedence in construction plans and fundraising, but this year it was finally the Root Cellar’s turn for a bit of renovation. The goal was to remove the building on top, build a new roof and door using old photos as a guide, tuck point, clean up and expose the original stone walls as much as possible, and create a much-needed public restroom, a vending area, and a bit of storage.

2010 is the 75th anniversary of the founding of The Clearing and re-creating the look of the original Root Cellar this year is a fitting tribute to Jens Jensen. In February 2010, demolition of the Snack Shack began. Jim Creed and his crew carefully removed the roof, walls, and the floor, exposing the Root Cellar interior to sunlight for the first time since 1947 and evicting any hibernating spiders. By the end of the day on February 12th, all that was left of the Snack Shack were memories. First to go in was the new 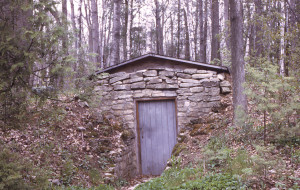 plumbing for the restroom facilities, followed quickly by the roof’s center beam on February 15th. On February 19th the new cedar shingles went on, and they perfumed the area in the heat of the weak winter sunshine. By the last week of March, the ground had warmed enough to allow the new concrete floor to be poured. The following week the interior spaces were framed in and electrical work began. Toward the middle of April a mason was brought in to repair and finish off exterior stonework around the doorway. In early May, Landscape Architecture students from the University of Minnesota cleared brush around the entrance, re-laid the flagstones, and rebuilt the retaining walls. The original door had been saved, framed with new wood to fit the rebuilt opening, and replaced. A screen door was added to aid in ventilation, and that was that. The Root Cellar renovation was complete and open for business.

The Clearing is a folk school, in the Danish tradition, located outside of Ellison Bay in Door County. It offers week-long summer residence classes, during which time the campus is closed to visitors to preserve the retreat atmosphere. Visitors are welcome to visit the Jens Jensen Center, where information about resident and workshop classes can be obtained. Also in the Jensen Center is a 75th anniversary exhibit entitled “The Clearing Speaks,” showcasing art and writings by students. The Clearing campus is open to visitors on Saturday and Sunday from 1:00 to 4:00 pm and a staff member is in the Lodge to answer questions. A guided tour can be arranged by calling (877) 854-3225 or stopping in at the Jensen Center ahead of time, and there are miles of hiking trails offering breathtaking views along the bay, through the woods and meadows.