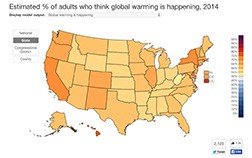 Whether climate change is occurring or not and why is a matter of science, not of public opinion or political ideology. The same is true for whether the earth is round or flat, or circles the sun.

Public opinion, however, is crucial in determining whether our policymakers will take action. To slow down warming and adapt to the many adverse changes that are likely to occur before we are in full crisis mode, public understanding must align with science; that is, it must be grounded in fact. What the public believes will determine whether we address the challenges posed by climate change intelligently and effectively through bipartisan action (after all, everyone will be affected regardless of political views), or allow partisan bickering and stalemate to block effective measures.

So, where is public opinion?

The last two findings are very disturbing because they are clearly wrong. In fact, no significant scientific controversy exists about rising average temperatures of our atmosphere and oceans, or about human activity as the driving factor of this phenomenon. According to numerous sources, including the National Aeronautics and Space Administration, 97 percent of the scientific peer-reviewed studies of climate change support these conclusions — not a controversy at all, but rather a remarkable consensus. The few studies that conclude otherwise have almost all been paid for by economic interests like the coal industry, which stand to lose from carbon regulation. Little scientific doubt remains that CO2 emissions from the dramatic increase in burning fossil fuels since the industrial revolution, and the acceleration in emissions in the last 30 years as China, India, Indonesia and other developing nations have industrialized, is raising the average temperatures of our atmosphere and oceans, triggering consequences in every ecosystem.

So, why is public opinion poorly informed on the science? Many observers cite the media’s drive to provide “balance” – giving both “sides” of an issue in reporting. In climate change reporting, this so-called balance falsely equates the 97 percent of scientists who agree on climate change with the three percent who disagree. Controversy is also better copy than agreement.

Other major factors may be political or ideological reactions to the environmental advocacy organizations who speak to the issue, combined with very sophisticated disinformation campaigns by well-funded groups opposed to carbon regulation.

Whatever the reasons, the Yale study shows that those of us who recognize the very real threats of climate change, from food insecurity and water supply depletion to coastal flooding and bird habitat destruction, have a lot to do. We need to educate and substantially narrow the gap between science and public opinion on climate change. Until that gap is closed, there is little hope that our policymakers will unite and act to protect the world we leave to our grandchildren.

What about Wisconsin and Door County?

Wisconsin opinion closely reflects the national averages: 61 percent believe climate change is happening; 48 percent believe human activity is the cause; 50 percent worry about the consequences — but only 41 percent recognize that scientists have reached an overwhelming consensus. Both Illinois and Minnesota residents are better informed and more concerned than we are.

And Door County? It is heartening to see that we are significantly ahead of the rest of Wisconsin: 68 percent of county residents believe climate change is real; 55 percent realize that human activity is the major cause; 57 percent are worried about the impacts, and 49 percent understand that most scientists agree.

This is good news, but clearly much more education remains to be done before our leaders in Madison and Washington summon the courage to act.

The Yale project, including its interactive maps, is available at: environment.yale.edu/climate-communication. The maps provide survey data on these and other related questions for every state, county and congressional district in the country.

Pat Crow, Chuck Lauter and Roy Thilly are members of the Steering Committee of the Climate Change Coalition of Door County.