Door County’s boreal forests are home to thrilling biological diversity. Spruce, fir, white cedar and paper birch tower over mountain maple and thimbleberry. A community of miniature plants grows on the forest floor, including Canada mayflower, twinflower, wood nymph and boreal mosses. Rare plants like dwarf lake iris and orchid species thrive in these forests. They provide nesting habitat for a number of songbirds that would otherwise pass through on their way to boreal forests further north.

Our boreal forests are a unique, world-class ecological resource, and ecotourism destination, unmatched in the United States. They are endangered by climate change. It is important to understand what may happen to them if we don’t take decisive action to slow down the warming of our planet.

Boreal forests of spruce, fir, pine, larch, birch and aspen grow in cold, high latitude places in the northern hemisphere. Temperate forests of oak, maple, basswood, ash, cherry, beech, and hemlock grow to their south. Door County lies within the interface of these two great forests – a swath 200 miles wide from Minnesota to Maine – where boreal and temperate forest trees grow side by side.

The lakeside of Door County has a tract of pure boreal forest far south of its normal occurrence. While the county lacks the short growing season and minus-50 degree winter temperatures that exclude temperate tree species from boreal forests as in Minnesota’s Boundary Waters, the lakeside of the peninsula is cold enough to support boreal forest in a unique way.

Lake Michigan’s warm surface water is lighter than colder water below and is pushed to the Michigan side of the lake by predominant southwest winds during summer. Cold water from hundreds of feet down then upwells on the Wisconsin side, fueling cool summer breezes off the lake. The result: 70-degree lake breezes and temperate forests on the Michigan side and 60 to 65-degree lake breezes and boreal forest on the Wisconsin side. Because cool air is denser than warm air, and the Door Peninsula slopes down from the bayside to the lakeside, the coolest summer temperatures occur lakeside. Warmer water in Green Bay reinforces the pattern of bayside temperate forest and lakeside boreal forest.

Will cool summers on Door County’s lakeside persist in a warmer climate? It is hard to tell. Although the bottom of Lake Michigan will always be cold, in a warmer future that cold water will mix with warmer surface water as it upwells. Recent research indicates that a mean summer temperature of 65 degrees is a tipping point between temperate and boreal forest – above that temperature maple and oak will grow faster than spruce and fir. Above 68 degrees boreal tree species will not survive.

Climate projections indicate that an average summer in 2090 will be like the summer we experienced in 2012, when average surface temperatures crept into the upper 60s on the Wisconsin side of Lake Michigan. If all summers in the future become like 2012, the lake breeze will likely be too warm to sustain our boreal forest.

We can also look ahead in time by going to places that currently have a climate like that projected for Door County in the future. A natural area on the shore of Lake Erie, Rondeau Provincial Park, Ontario, provides such an analog. It has ridges and swales like The Ridges Sanctuary, and is within the lake effect zone. However, Lake Erie’s 70-degree surface temperatures and summertime lake breezes are too warm for boreal forest. Instead, Carolinian temperate forest occurs, with tulip poplar, red oak, sugar maple and trillium.

If temperate forests replace the boreal forests of Door County, will they be like the forest we are used to in Peninsula State Park? Or will they be like the Carolinian forest of Rondeau Provincial Park? Probably not like either. Tree species like tulip poplar are not close enough to easily migrate here, and more importantly, the conditions that determine which species are successful are different now than they were historically. High deer populations and the European earthworm invasion are changing the forest floor environment, making it likely that red maple and oak with Pennsylvania sedge and other grass-like understory plants will dominate our future forest.

The bottom line is that, while maple and oak forests are lovely, if we want to preserve the unique beauty of our boreal forest, and the phenomenal plant and animal life it nurtures, we must substantially reduce the burning of fossil fuels to reduce the magnitude of future warming. 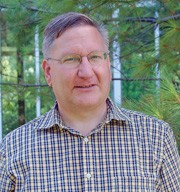 Lee E. Frelich is director of the University of Minnesota Center for Forest Ecology. He received a Ph.D. in Forest Ecology from the University of Wisconsin-Madison in 1986. Dr. Frelich has authored numerous scholarly articles together with 25 graduate students and 120 scientists from 15 countries. His research has been featured in the news media, including the New York Times and National Geographic. He has provided consulting services on forest management to a number of government agencies, including the Army, Air Force, U.S. Forest Service, and National Park Service.

The Climate Corner is a monthly column featuring a variety of writers from around the state and Door County addressing various aspects of the challenges and opportunities climate change presents. The Corner is sponsored by the Climate Change Coalition of Door County, which is dedicated to “helping to keep our planet a cool place to live.” The Coalition is always open to new members and ideas. Contact the Coalition at: [email protected].