As President Obama noted in announcing the EPA’s new Clean Power Plan: “We’re the first generation to feel the impact of climate change and the last generation that can do something about it.”

The Clean Power Plan requires states to reduce their carbon dioxide (CO2) emissions from their electric generation by 2030. Each state must adopt an implementation plan describing how it will comply. The reductions can be achieved by improving the efficiency of coal plants, increasing use of efficient gas-fired and renewable wind and solar generation, and improved energy efficiency. If a state fails to provide a timely plan, a federal plan will be imposed.

While some argue that the rule will dramatically increase electric rates, a thorough national economic evaluation by EPA estimates the plan’s annual benefits at $34 billion vs. annual costs of $8.4 billion by 2030; minimal increases in 2030 electric rates; and lower 2030 electric bills due to energy conservation.

In 2012, Wisconsin CO2 emissions were 88.4 million metric tons, with 42 percent coming from electric generation and 30 percent from the transportation sector. The Clean Power Plan requires Wisconsin to reduce its electric generation CO2 emissions by about 33 percent from the 2012 level. This is a very achievable goal, but one that will require major changes in our electric system.

Renewable generation will provide an important tool for complying with the plan in a cost-effective manner. Wind and solar generation can be developed by utilities using large-scale installations and by individual consumers using small-scale systems. When combined with smart grid technologies, small-scale renewable generation on rooftops or jointly owned community solar gardens can allow consumers to better control their electric use to minimize their costs.

Thus, renewables provide dynamic new opportunities for utilities, regulators and consumers in defining the grid of the future that will best serve the public interest. The distinctions above render simple cost comparisons unhelpful. To truly compare renewable generation with fossil-fuel generation, we must compare both costs and benefits, including the many benefits of reducing harmful CO2 and other fossil fuel emissions that present significant health risks.

In Wisconsin, the penetration of renewable energy to date has been driven by a Renewable Portfolio Standard adopted by our legislature in 2006 that requires all electric providers to generate 10 percent of their power from renewables by 2015 and thereafter. Since that requirement has been met, there is no requirement for further additions of renewables.

The Wisconsin 10 percent renewable mandate is modest compared to renewable requirements of 28 other states, plus the District of Columbia. Illinois and Minnesota, for example, require 25 percent by 2025. In addition, Minnesota has a specific requirement to add solar generation that will result in new solar capacity by 2020, equivalent to a large coal-fired plant.

The difference between Minnesota’s strong renewable policy and Wisconsin’s very modest policy is evident in the following graphic: 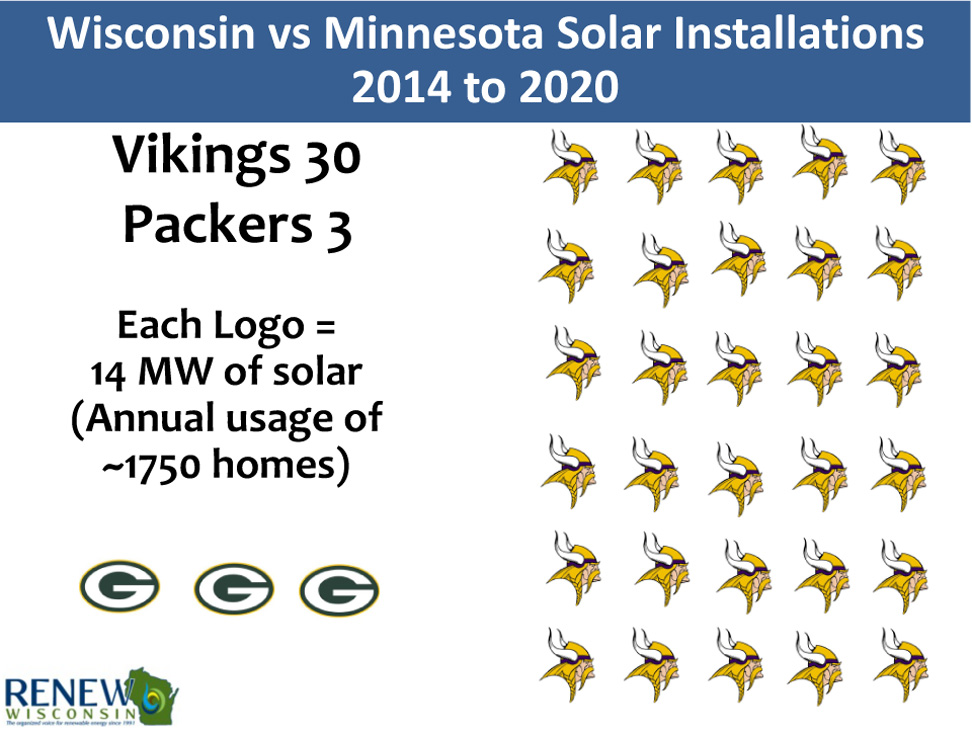 Without a binding state requirement to add additional renewable generation, it is the federal Clean Power Plan that will force needed changes in Wisconsin’s electric system.

While Wisconsin has joined other states in a legal action to defeat the plan, it is clear that Wisconsin will be much better off developing its own state implementation plan that meets our particular needs rather than defaulting to a federal plan. Hopefully, our state regulators will recognize this fact, despite the pending legal challenges to the plan.

Adding renewable generation, becoming much more efficient in our use of energy, and substantially reducing the pollutant emissions from coal generation that are a primary cause of climate change – and also a cause of very costly respiratory health problems – can only benefit our state. Wisconsin should take these steps with or without the Clean Power Plan.

Duane Kexel has 42 years of consulting experience with domestic and international clients in transportation, water resources and power, and has consulted with the World Bank for 20 years on renewable energy in 14 countries. He is based in Madison and serves on the board of directors of Renew Wisconsin.

The Climate Corner is a monthly column featuring a variety of writers from around the state and Door County addressing various aspects of the challenges and opportunities climate change presents. The Corner is sponsored by the Climate Change Coalition of Door County, which is dedicated to “helping to keep our planet a cool place to live.” The Coalition is always open to new members and ideas. Contact the Coalition at: [email protected].