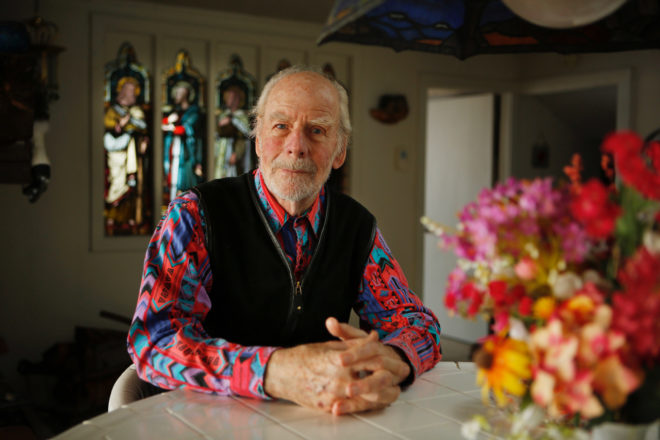 Karsten Topelmann, photographed in his home in Ephraim. Photo by Lars Topelmann.

In the buttoned-down, monochromatic village of Ephraim, Karsten Topelmann was a splash of bright color that spread far beyond the canvases of his renowned paintings.

Topelmann was a ubiquitous, sometimes flamboyant presence who connected to the young, the old, the artist and the tradesperson, in addition to the lovers of the Door County landscapes he painted in oil and watercolor for more than five decades.

Topelmann died Feb. 13 at his home overlooking the shore of Ephraim, just a few days after his final painting session. He was 91.

The artist’s journey to Door County started in Munich, Germany, where he was born and endeavored to become an artist at an early age, learning the craft at the feet of his father and always carrying a painting kit and a sketch pad. Topelmann went on to study at Munich’s Royal Academy of Art.

He immigrated to the United States in 1955 and began his career as a designer and art director in Davenport, Iowa, before moving to Chicago, where he met and married fellow German artist Ellen Sprogøe. They discovered Door County separately, then as a couple, and like so many others of their generation in Chicago, they began toying with the idea of moving to the peninsula to raise their three children: Tanja, Lars and Lisa.

“They loved the water, they loved the nature, they loved everything,” Lars said of his parents. “Moving to Door County was a dream of theirs, but they wondered if they could actually make a living doing what they love and live in this beautiful little village.”

In 1971, the Topelmanns decided to find out. They bought the Larsen Cottages in the center of the village, and Ellen lived there with the kids that first summer while Karsten kept his job in Chicago and came up on weekends.

“Mom was determined and strong. She worked the business,” Lars said. “Dad was not so sure it could really work.”

But after a season, they were finally convinced that their independent artists’ life could work, and they committed to their new home, opening the Hanseatic Art Gallery full time in 1972.

Once open, they worked day and night, closing for dinner with the family, then reopening in the evening.

The gallery took its name from their German roots. Ellen’s hometown of Hamburg was a trading city, part of the Hanseatic League of Cities. They felt the unusual name would enable them to carry work beyond their own. Karsten supplemented his income by designing brochures and posters, and updating the logo for the Door County Chamber of Commerce.

“They were hustling to make ends meet,” Lisa said. “Everything they made went into the property.”

Like many of the artists of the 1970s who helped to establish the peninsula as an arts destination, the Topelmanns scraped by. There was an outhouse out back, trips to the laundromat in Sister Bay and constant patches added to the building. Other artists joined the community of creators: jeweler Amanda DeWitt down the street, potters David and Jeanne Aurelius in Ellison Bay, and Anne and Minnow Emerson in their barn-turned-gallery in Fish Creek.

“They were free spirits, independent spirits, all just trying to make it,” Lisa said. “Everyone had kids to raise and bills to pay.”

There was no pretense when a visitor entered Hanseatic Gallery. Ellen and Karsten loved to strike up conversations. Ellen wanted your story, and Karsten lit up at the chance to discuss a painting.

“He was a master painter,” Lars said. “He understood what moved people. It was authentic and real. And then they would come to the gallery and talk to him, and he could tell the story of every single painting. That was one of his favorite things to do. If someone was interested in art, he loved to talk about it.”

That welcoming aura made an impression on writer Melissa Ripp, who profiled the Topelmanns for Door County Living in 2008. She first met the couple when she was a 15-year-old girl whose only experience in the art world was having a gallery owner scold her upon entering: “If you break anything, you buy it.”

“I walk into Hanseatic Gallery, and here’s this older woman and her husband, who are elated to see me and show me around the gallery, talk about their travels and influences,” she recalled. “Ellen gave me a painting. She said the young girl in it looked like me and I should have it. I always remembered how well they treated a young girl.”

The Topelmanns’ style sent her a message as well.

“I just thought, ‘Wow, you guys are happy, and you don’t really care if people think you’re weird,’” Ripp said. “That made a big impression on me.”

The Topelmanns loved daily dips in the bay and strolling through the village together, often dressed in eccentric fashion – loud, colorful clothing, with wild hats and vests.

“They would basically dress up to go to the Piggly Wiggly,” Lars said. “They loved the idea of being a power couple of creativity. Looking through their closet is like looking through a costume room in a theater.”

Karsten was quick to crack a joke and even incorporated that whimsy into his paintings, sneaking a word or element into a cloud, just for kicks.

Paul Wanish got to know the Topelmanns when they would stop at the Ephraim soup bar he ran for nine years.

During the winter for almost 20 years, Karsten and Ellen traveled the world, living and painting in Rothenburg ob der Tauber, Germany; and on the Island of Tenerife in Spain’s Canary Islands. But Ephraim was home and their greatest inspiration. Karsten was honored to be named the village’s Fyr Bal chieftain in 2003.

Ellen died in 2016, but Karsten continued to paint and connect to the younger wave of artists and entrepreneurs revitalizing Ephraim. In 2018, he traveled to Adelaide, Australia, where his daughter Lisa Topelmann-Weder, an art curator, had arranged Bloom, an exhibition of his paintings. He called it one of the highlights of his life.

“Painting was his sanctuary, his escape from everything that was troubling him,” Lars said. “He would use it as therapy. Even in his final painting sessions, he was almost floating.”

During Karsten’s last week, his friend Helene Ingsten Anderson took him a bowl of Swedish bread and a bowl of flowers, thinking he might paint the flowers. Instead, he painted the bread.

“It was fitting in a way,” Lars said. “Painting was sort of his daily bread.”

The family plans to host a summer retrospective of Karsten Topelmann’s work at the gallery, which will be open this summer at 3060 Church Street in Ephraim.