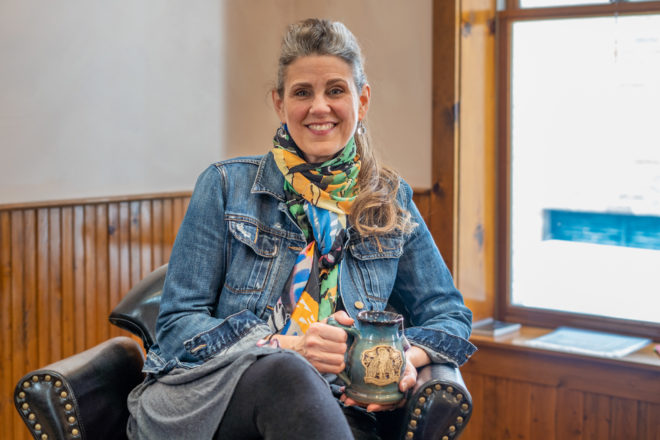 If Andria Nikoupolis Weliky tells you she’s a phoenix rising from its own ashes – and she did – you know she means it metaphorically and pretty literally.

In this case, she has arisen from the ashes that COVID-19 made of her former salon and dance studio in Egg Harbor, and her phoenix is rising in Sturgeon Bay in new manifestations of her former businesses, focused on the healing and esoteric arts.

“Hence the fifth house Scorpio, because the phoenix is the symbol for the Scorpio,” she said. “The disillusionment, the dissolving of having to close everything when COVID hit and just pulling the plug, and then the crucible of transformation, reinventing myself.”

The reinvention took shape last year and is now official. But it’s still hard to define her exactly and easy to suspect she prefers it that way. Take her business card, which says, ‘Instructor, choreography, designer, astrologer, catalyst.’ Each of those labels refer to different roles she plays in different aspects and spaces. Emerald Lion Alchemy is the umbrella company, and one of its spaces is 45 S. Third Avenue. It’s there in Suite 5 that Weliky practices chemical-free cosmetology, providing haircuts, henna hair color, body art and nail care using all natural products.

Up the street at 234-236 N. Third Ave. is a building owned and recently renovated by Shirley Wiese Young. In collaboration with Young, Weliky has opened Studio 234 on the building’s first floor, while renting the apartment on the second floor with wife, Jen Aldrich.

“My idea for this is that you will have multiple teachers teaching out of this space and everybody is an independent business,” she said. “The students would register through the instructor through Studio 234’s landing page.”

The studio opened in January and is primarily hosting youth classes at this time. Eventually, she’d like to add instructors and offer adult dance and movement classes, including barre flow, belly dance, tap and special classes, such a Qi Gong (cheeGONG), through private or group instruction.

Last but certainly not least, Weliky is an astrologer who’s working her way through various certifications. She gives personal, natal birth chart readings that give a snapshot of where the planets were at the moment a person was born. The intent is to help open a deeper understanding of a person’s unique, cosmic blueprint and how those energies can be expressed.

“My goal is to help people expand their consciousness because that’s what astrology has done for me,” she said. “It has helped me be more reflective, to dance with the cosmic energy, to just be more aware, to put myself more at that eagle’s perch instead of just being a puppet of it. And through that, there’s so much growth.”

Some people have single readings; others practice “cosmic chiropractic care,” arranging for readings once a year.

“The planets are still moving and we’re feeling them, not just from our birth, but through our life they’re transiting and the planets are lighting up different parts of our chart,” she said.

Mercury has been in retrograde since May 10 and will remain that way until June 2. Retrograde is when a planet appears to go backward in its orbit, as viewed from Earth.

All the planets go retrograde at some time or another, but not as much as Mercury. And this year the optical illusion will happen four times for the smallest of our solar system’s planets, and the nearest to the sun.

“I don’t know if four is the most [for Mercury], but it’s usually three, so it’s going one extra,” said astrologist Andria Nikoupolis Weliky, who practices out of Sturgeon Bay under her umbrella company, Emerald Lion Alchemy.

Mercury retrogrades are known for creating confusion, delay and frustration. Emails are misinterpreted, travel plans frazzled. Intuition can be high during these periods and coincidences extraordinary. This particular retrograde will feel different for many reasons, Weliky explained.

“Up until now, we’ve been in the dreamy land of Pisces,” she said. “It’s been cloudy for so long. Venus has been in Pisces, Mars in Pisces, Jupiter, Neptune. And now everybody is moving into Aries, which is the action, the start, the beginning.”

People are warned against signing contracts or making major purchases when Mercury is in retrograde. But Weliky said that’s OK if the purchase or contract had been in the planning stages, and as long as people take their time, read the fine print and get second opinions.

“And slow down,” she said. “That’s going to be hard because all this other energy is kind of telling us to put the foot on the gas, subconsciously, when Mercury is really telling you to think before you do things.”