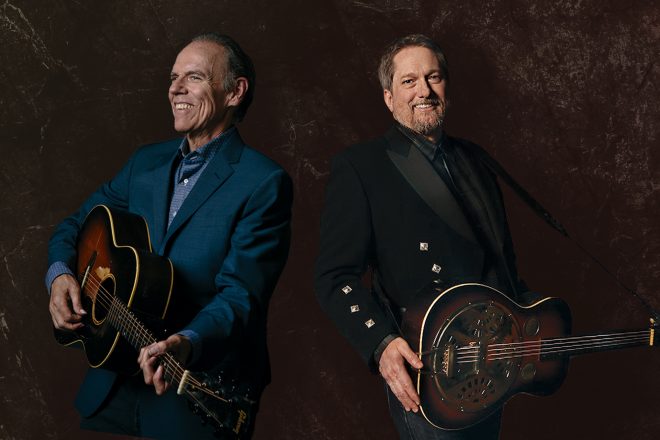 Legends Come Together at DCA

In the fifth decade of an illustrious career, you might think John Hiatt had already done it all. An acclaimed Nashville recording artist in his own right, Hiatt’s songwriting credits include hits by Bob Dylan, Emmylou Harris, B.B. King, Willie Nelson, Bonnie Raitt, and many more. His lyrics and melodies have earned him a place in the Nashville Songwriters Hall of Fame, a BMI Troubadour award, and a Lifetime Achievement in Songwriting designation from the Americana Music Association. Yet this August finds him excited about some career-firsts that the younger John would never have dreamed of.

Hiatt moved to Nashville in 1970 as an 18-year-old at the suggestion of Memphis songwriter Bob Frank, a folk singer who nudged the young aspiring songwriter to Music City to get ‘schooled’ in the craft. Ten days after he arrived, he signed a deal with Tree Publishing to write songs for $25 a week.

“In those days all the songwriters lived on Music Row along with all the publishing companies and recording studios,” he said. “I lived in a boarding house with six other songwriters for $11 a week. It had a bare light bulb and an iron-framed bed with all the springs showing through the mattress and I thought, ‘Man I’ve arrived!’”

Hiatt will perform at Door County Auditorium Aug. 22 in support of his first album, “Leftover Feelings,” with Dobro master Jerry Douglas. The album, recorded at the revered Historic RCA Studio B he had lived down the street from when he first landed in Music City, marked another first for Hiatt.

“Historic RCA Studio B is where all the Everly Brothers songs were recorded, so many other great country records, and all the stuff that Chet Atkins produced,” he said. “It was just amazing and I would never have dreamed I’d make a record there.”

Douglas, who also produced the pair’s new album, has performed on more than 1,500 albums by artists including Ray Charles, George Jones, Alison Krauss, Earl Scruggs, and James Taylor. Douglas and Hiatt first met in 1988, during the sessions for The Nitty Gritty Dirt Band album, “Will The Circle Be Unbroken Volume Two.”

“I was there to sing a duet with Roseanne Cash on a song that I’d written for the project [One Step Over the Line] and he [Douglas] was a member of the house band,” Hiatt said.

There wasn’t an immediate spark between the two or sign of the collaboration to come and they didn’t play together in any serious capacity for decades.

“I’d see him around town but, you know, musicians are all so busy all the time so we never really hooked up until this project,” Hiatt said. “We were laughing about it the other day. It’s kind of a late-life stage friendship.”

The delay in the blossoming of their musical friendship was partly due to the different genres they were working in. Hiatt was a singer-songwriter and Douglas a trailblazer of modern bluegrass dobro. It took some time to find a musical middle ground where a collaboration would make artistic sense.

“We came from different worlds, although those worlds have gotten closer and closer in the ensuing years,” Hiatt said.

The collection of songs chosen for the record is made up of mostly songs written during the pandemic by Hiatt who, like all musicians, found himself locked down at home in March 2020.

“Initially the pandemic was overwhelming, but there were some benefits,” he said. “I started developing a simple life pattern that my wife and I hadn’t enjoyed in years. My modus operandi is coming and going, and she was used to that as well. When the pandemic hit, we were 34 years married and we had to sort of relearn how to be together for lengths of time.”

As well as spending time with his wife, he found inspiration to write. He penned eight of the 11 songs on the album during his forced hiatus.

“There’s three things I do: I write songs, then I record them, then I go out and play them,” he said. “I’ve been doing it since I was 18, and been writing songs since I was 11. It’s what I’ve been doing my whole life and I wouldn’t want to take any one away. It’s my little, three-legged milking stool. If you took one away, I think I’d wind up on my ass”.

The almost two years since he last performed live is the longest touring break he remembers since he was in his early twenties. He’s excited to get back on the road this summer in support of the new album.

As well as hitting the road to perform at DCA, this month marks another momentous first for Hiatt.