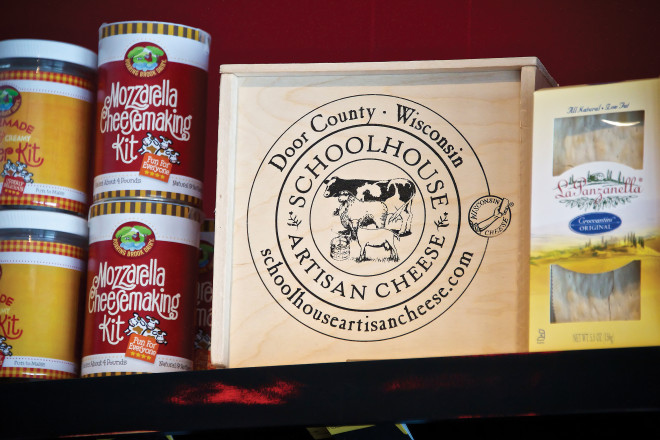 Wisconsin’s cheese culture runs as far back as the recipes used to turn fresh milk into wheels of soft chèvre or bricks of sharp cheddar. It is the industry that kept our grandfathers employed, it’s the food on our tables and it’s our heritage.

Dairy farming first came to the state in the mid-1800s, and by 1915 Wisconsin produced more cheese and butter than any other state. Research, passion and time helped the industry evolve from basic cheese-and-butter operations to the renowned artisan cheesemakers who now call Wisconsin home. 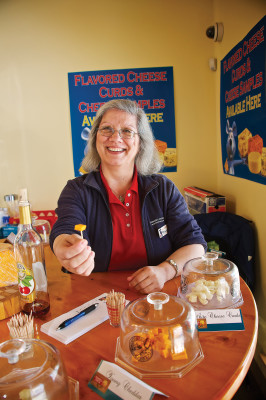 Door County is home to some of those renowned cheese makers, like Chris Renard, who earned his master cheesemaker license in January 2014. It’s also home to young, entrepreneurial cheesemakers like Jesse and Rachel Johnson, who started the Door County Creamery in 2013, and cheese experts like Janice and Michael Thomas who sell wheel after wheel of Wisconsin cheese from their Schoolhouse Artisan Cheese shops.

These cheesemakers and experts regard each other highly, reflecting the welcoming, enthusiastic nature of Wisconsin’s cheese culture.

The welcoming nature of the cheese industry isn’t lost on the Thomases, who tour cheese factories around the state to taste and learn about the cheeses they sell.

“The cheese culture is unlike anything I’ve been around, from a business standpoint,” Michael said. “The people Janice and I deal with are down to earth. We know them, we’ve been in their houses, and we’ve met their kids. We’ve eaten at their tables and they’ve eaten at ours.” 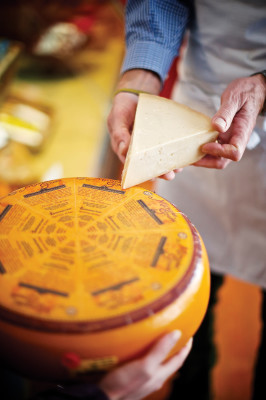 “People care about where their food comes from more now than ever before,” Michael said, adding that modern, highly mechanized food production is a stark change from the past. “When our grandparents were buying food, everything was fresh. You’d go to the market and there would be a butcher. You’d have a story about this meat you’re buying, the same thing with cheese and poultry. That’s one of the things we offer in a shop like ours.”

Both new and old businesses lead the peninsula’s local food movement. The Door County Creamery uses milk from its own Sister Bay goat farm, and in 2013 opened a restaurant and shop to feed hungry visitors delicious goat’s milk cheese and gelato. Renard’s Cheese has been in business since 1961, using local milk to make classic curds, cheddar and mozzarella.

Quality, local food isn’t just important to consumers – the Johnsons and Renards employees care about their product beyond their businesses’ bottom lines.

“We’re a small plant,” Renard said. “We’re not pushing buttons. It’s all hands-on. We’re turning the cheese by hand. It’s all done with a lot of manual labor, so you take a lot of pride in the product you’re putting out because it took a lot of work to get there. We’ve always, here, believed it’s the quality not the quantity.”

Artisan, Door County cheese has another culture, beyond the taste, history and passion that goes into it. 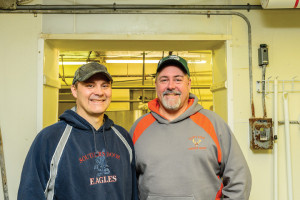 “Everything in there is living,” Michael said, gesturing to the cheese display in the Egg Harbor Schoolhouse Artisan Cheese shop. “Kraft Singles are dead.”

Chris Renard never thought he would return to the cheesemaking profession he started as a five-year-old washing milk cans in the early Renard’s factory. A few decades later, he’s part owner of the family business and one of less than 60 master cheesemakers in the country.

“I came back,” Renard said. “I went to college and if you had asked me when I left if I was going to come back and make cheese I would have said ‘no way.’”

Seven years working in the corporate world changed his mind. For Renard, there’s no comparison between a big business that doesn’t value its employees to a family owned one that cares about a good work environment and a quality product.

Renard’s Cheese started in 1961, when Chris’s grandfather decided to go out on his own, and bought a cheese factory in 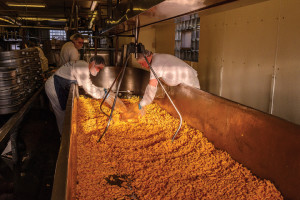 Brussels. In 1966, Renard’s dad bought the Cloverleaf dairy next door, and in 1975 they combined the two. The business was strong, and in 1998 Renard took over his father’s shares.

“Dad was talking about retiring,” Renard said. “He called up and asked if I had any interest in coming back, so I sat down with him and [my uncle] Brian. Three months later I decided instead of staying in corporate America I was going to move home. I thought Door County was going to be a better place, so I went back to the family business.” 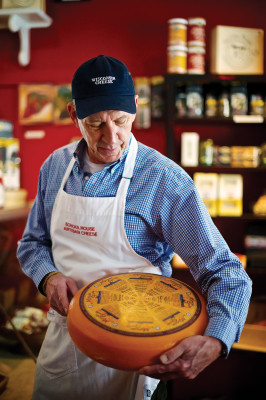 Janice and Michael Thomas turned their hobby into a profession in 2008, when they took their annual Labor Day road trip. They drove around the state tasting artisan cheese, touring the plants where it’s made and meeting the people who make it.

They met about 30 cheesemakers, and decided they wanted to represent them in their Savory Spoon Cooking School.

“What used to be just fun became an occupation,” Michael said.

Since they care about selling delicious, artisan Wisconsin cheese, the Thomases take the extra time and energy to make Schoolhouse Artisan Cheese shops cut-to-order. They keep cheese in its original wheel or brick form, unwrap it whenever a customer wants a taste or a slice, then re-wrap it when the order’s complete.

Cut-to-order style of cheese selling takes some extra time, but it protects cheese flavor and makes it easy for customers to taste cheese before purchasing it. That’s all worth the extra work for the Thomases.