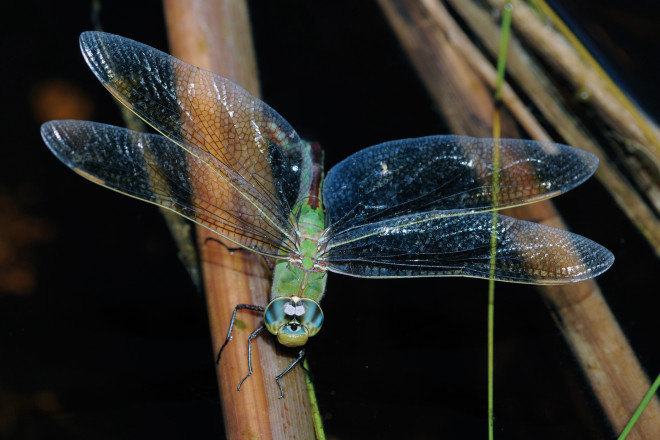 It was in 1937, as a fourth-grader in the Kewaunee Public School, that we began studying more about our great state of Wisconsin. I was happy to learn about our state bird, the American Robin; our state tree, the Sugar Maple; and our state wildflower, the Common Blue Violet. The thought of choosing a state insect still had not been considered, and that eventually turned out to be a species that is not even native to North America, the Honeybee. 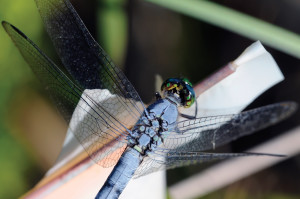 Now, since I’m fascinated in studying and photographing dragonflies, I used the amazing power of the internet to learn there are two states which do have dragonflies as their official insects, Alaska with the Four-spotted Skimmer and Washington with the Common Green Darner, both species easily seen in Door County. Pennsylvania adopted a nifty insect, the Firefly, while New Jersey claims it doesn’t have a state insect but rather a state bug, the Honeybee! One of the most unusual state insects is the Tarantula Hawk Wasp for the state of New Mexico.

It was my mother’s mother, my Grandma Skala, who often looked after my two older brothers and me; we were always very active outdoors during summer vacations, and she warned us to not get too close to the dragonflies we often saw in our large garden. She told us they were “devil’s darning needles” and would sew up our ears and mouths if we were naughty boys. Naturally we believed her.

Once I began teaching the upper grades and junior high school students in 1955, I made frequent use of the books written by one of America’s finest nature writers, Edwin Way Teale. Being such an excellent photographer of insects, some of his illustrated dragonfly stories greatly increased my fascination in these amazing and greatly under-appreciated insects. My work at the Ridges Sanctuary in Baileys Harbor, from 1964 to 1990, offered me and the many visitors I led on interpretive hikes some of the finest dragonfly-rich wetlands in eastern Wisconsin. I soon came to realize that dragonflies are one of the most visible indicators of the wetlands’ diversity and health. The more dragonflies the better! 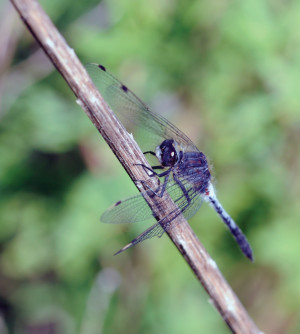 Our construction of the observation platform at the Ridges in 1976 in the swale to the north of Winter Wren Trail provided us with superb dragonfly sightings and experiences. Naturally I came to know well the treasurer of the Ridges, Virginia Booth, who lived along the shore of Baileys Harbor Bay. She carefully maintained two large Purple Martin houses that always had active colonies of the Martins. I was amazed the first time I stood close to the occupants on a calm, sunny day in July and carefully glassed them to learn more about what food the adults were bringing to their young. Most often their beaks were crammed full of dragonflies, which I assumed those skilled birds were capturing in the air over the swales within the Ridges.

Thereafter my touring friends and I often watched from the observation platform the many Purple Martins hunting over the pristine swale surrounding the platform. One day I asked my hiking group, “Do you suppose the Martins are adding to the number of mosquitoes here at the sanctuary?” Silence followed until one person piped up, “Don’t you mean just the opposite? I understand that one Purple Martin can eat as many as 2,000 mosquitoes in a day.”

What the people couldn’t see was that the birds’ beaks were full of dragonflies, and the dragonflies, accurately referred to as “mosquito hawks,” are the genuine consumers of millions of mosquitoes. The Purple Martins rarely consume mosquitoes because their flights are usually well above the range of the mosquitoes that stay quite close to the ground.

By far the most common dragonfly I encountered on the trails with people throughout the summer and especially into the fall was the small, red-bodied male White-faced Meadowhawk. Their tameness allowed the hikers to get very close for enjoyment and pictures. Quite often one of the little Meadowhawks would land on someone’s cap or shoulder. 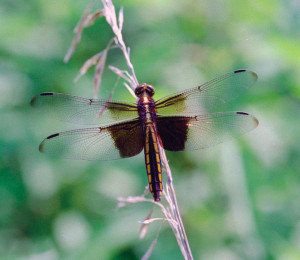 One of the most marvelous features of the roughly 108 species of dragonflies recorded in Wisconsin is their large, bulging compound eyes. As many as 10,000 to 20,000 or more individual hexagonal-shaped facets, like tiny dimples, are separate visual units connected to their own nerve endings. The belief is that a rather coarse-grained picture is seen by the insect. Nevertheless, they are extremely efficient at detecting movement and are known to be able to see the flight of a mosquito at a distance of about 50 feet.

Two pairs of nearly identical shimmering glassy wings are stretched tightly over an intricately fine but strong network of veins and ribs. The wings are attached to the thorax, the dragonfly’s “power plant,” and strong muscles within the thorax cause the two pairs of wings to vibrate upwards of 1,500 times a minute. The creature can hover, shoot ahead, zoom upward, dive and even fly backward for short distances. They can maneuver in ways that we can only imagine. Tennyson [Alfred Lord Tennyson in “The Two Voices”] called them “living flashes of light.”

What’s truly amazing is that dragonflies spend the greater parts of their lives underwater as nymphs. They live in a murky environment of silt, submerged vegetation and green algae. Actually they are mud-colored, water-breathing carnivores that seem to stalk their living prey non-stop. Interestingly their prime target consists of the wrigglers of mosquitoes that develop in water. 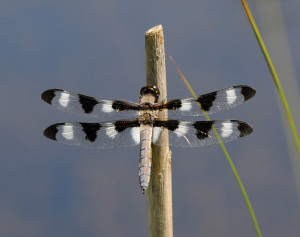 Depending upon the species of dragonfly, it will spend anywhere from one to as many as five years underwater as a nymph.

Then follow the dragonfly nymph to the point when it climbs out of the water, attaches itself to, for example, the stalk of an aquatic plant growing out of and above the water, and then magically sheds its skin and becomes a dragonfly. Now the winged, air-breathing creature, certainly somewhat resembling a bird, becomes the “mosquito hawk” that will tirelessly feast on adult flying mosquitoes. Unquestionably both the dragonfly nymph, within the water, and adult dragonfly, above the water, are great friends of mankind in helping to control the enormous and pesky mosquito population.  The adult dragonflies usually live anywhere from several weeks to about four to five months.

Only a few species of dragonflies are known to migrate, with the most frequently observed and abundant being the Common Green Darner, a well-known Door County species. They make a one-way trip south, and then their offspring make the one-way trip north the following spring.

The most accurate identification of dragonflies is accomplished by netting them and examining in the hand. My advice is to go about it slowly and carefully in order to avoid injury to the dragonflies. 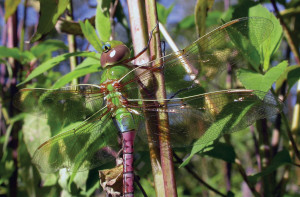 There are a number of good field guides and books regarding the study of dragonflies. One of my favorites, Common Dragonflies of Northern Door County, was written by Door County’s dragonfly guru, Dr. Paul Burton. His superb photography will help you learn a great deal about some of the species known to be in our area, especially the federally threatened Hine’s Emerald. Another guide I often use is Dragonflies of the North Woods by Kurt Mead. The excellent colored photos in this field guide are large enough for one to study carefully and to increase your enjoyment of the pursuit of dragonflies.

Watching dozens of dragonflies executing spirals, loops, zigzags, stalls and other amazing aeronautical maneuvers in their insect-capturing or territory-defending ventures will prove to be an exhilarating and memorable summer adventure.