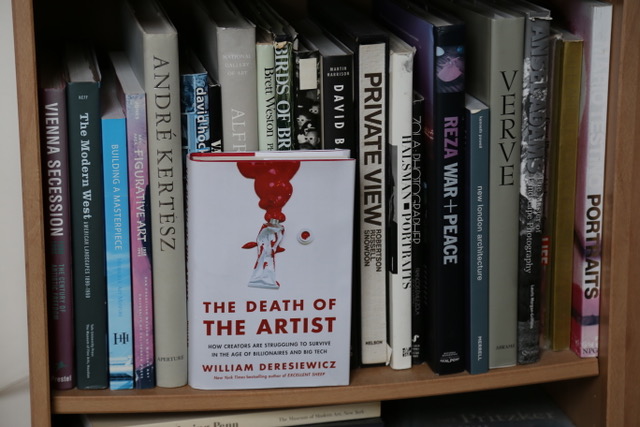 The Death of the Artist: How Creators Are Struggling to Survive in the Age of Billionaires and Big Tech by William Deresiewicz is a provocative book, if not necessarily persuasive.

Deresiewicz had the wonderful idea of looking at the state of art – visual, music, literary, drama – by talking to about 140 practitioners. He develops some of his points around two constructs: Silicon Valley, which says that everyone can be an artist by using tools such as the iPhone and the internet; and struggling artists, who say that merely being able to put their work out there doesn’t necessarily mean they’ll be paid for it.

Deresiewicz places his story in a larger tale of stagnant wages, soaring rents in major cities and tuition for higher education that results in oppressive levels of student debt. Artists are increasingly on their own, left to develop entrepreneurial skills and promote themselves through the internet. The trouble with this bleak view is that it leads the author to suggest a reordering of the country’s economy, which might be a laudable goal but falls short of an immediate solution.

Perhaps he should have visited Door County to conduct research because it has achieved a critical mass: It has enough galleries and enough variety to attract art lovers who can be pretty sure they’ll find something they like.

Destination Door County’s website quotes Stephanie Trenchard of Popelka Trenchard Glass in Sturgeon Bay about how she came to make Door County her home after years of vacationing here.

“Outside of New York City and Santa Fe,” she said, “Door County is one of the few places where artists can support their families with their creative practices. Also, being more affordable, Door County offers artists the opportunity to do more community-involved events such as mentorships and demonstrations for the schools.”

“Go where there are lots of artists, and there will be lots of collectors,” Trenchard said.

But it’s not necessarily easy. Jeremy Popelka, her husband, said he worked a lot of odd jobs before their studio and gallery became profitable.

Pamela Murphy, a painter whose work is on exhibit at Fine Line Designs on the Ephraim-Sister Bay line, worked in bars and then for Air Wisconsin before, at age 28, she attended the Rhode Island School of Design (RISD), moved to Door County and worked in restaurants for several summers.

“I had to find a way to earn a living,” Murphy said, “and Door County was also attractive to me because I could work really hard and as many hours as I could during the summer to save up money. Then the business would be closed during the winter, and I could spend all my time painting.”

Judy Kothor – who operates Gills Rock Pottery with her husband, Larry “Thor” Thoreson – taught eighth-grade language arts in Crystal Lake, Illinois, for 17 years before joining the pottery business full time. She and Thoreson left school with no student debt, but she said starting a pottery business in Door County was still tough.

“When we bought this building,” she said, “it was incredibly expensive – but nowhere near what people would have to pay for something like this now.”

They frequently field questions from customers about whether they would recommend a career in pottery.

“My husband would say yes; I would say no,” Kothor said, recalling times when they would do art fairs and think themselves successful when they had sold 15 mugs at $3 each.

Then again, she said, “Being able to support yourself doing something you love is wonderful.”

Mary Ellen Sisulak – who designs artistic handbags, paints, etches and creates painted leather pieces at a gallery under her own name and also at her Turtle Ridge Gallery in Ellison Bay – is decisive when she answers that question.

“I always encourage them because if you aren’t doing what you love to do, what are you doing?” she asked. “It wasn’t easy – it was very difficult – but it’s what I wanted to do. That’s why I didn’t become a teacher – because I knew if I became a teacher, I wouldn’t become an artist.”

But Sisulak doesn’t shy away from the practical side either.

“You make things that you love,” she said, “but you have to sell them. That has to be part of your equation. I probably spend a third of my time marketing.”

Artists in the next generation may have it easier because the internet will allow them to work from home and market their creations all over the world.

“Yes, it’s hard to start out purchasing property,” Sisulak said, “but that’s true anywhere. An apartment in New York City or Chicago is expensive, too.”

When she started, she was often asked to do artwork for local businesses, and she sometimes regretted not having a background in graphic arts.

Several other artists who are prominent in the county – exhibiting here, even if they don’t live here – have graphic-arts backgrounds. For example, Dan Cross – who runs Idea Gallery and exhibits his own abstract digital painting there – spent 30 years as a graphic artist.

One who did not take that path is Pamela Murphy. She did choose graphic arts at RISD at first because it seemed to be a better bet for future income than studio art. Then a counselor asked why – if she was going to make such a huge investment of time and money in her education – didn’t she do what she really wanted, which was painting? Murphy shifted her approach, now has work in several art galleries and is happy to have them handling her sales.

The Death of the Artist is a good survey, analysis and critique, and it offers some practical advice, such as reviewing your success as an artist and asking whether it’s time for a change. It’s a worthwhile read for anyone who’s considering a career in the arts or is already involved in an artistic field professionally.