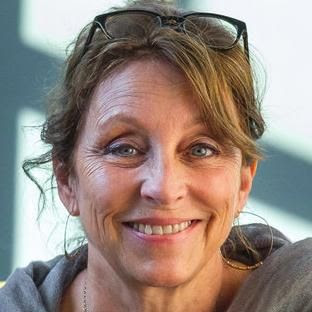 Playwright Marie Kohler has been in residence at TAP during rehearsals of her play, ”The Dig.”

Third Avenue Playhouse (TAP) opens its third show of the season, The Dig, on June 27, 7:30 pm. It will run through July 20, with no show on July 4. Donations received on opening night will go to the Door County Land Trust.

Playwright Marie Kohler has been in residence, and Alexander Coddington directs the show. The two will hold a talk-back discussion after the June 27 performance. There will also be a pay-what-you-can preview on June 26, 7:30 pm.

The play is the story of Mattie and her brilliant older brother, Jamie, who flew across the globe for a career in archaeology. On a 1968 dig in Lebanon, he had a psychological breakdown that transformed him forever. Thirty years later, an international inquiry compels Mattie to investigate the provenance of an ancient pot from her brother’s past.

The cast includes Karen Moeller as Mattie, Peter Reeves as Jamie, Christopher Sheard as young Jamie, Eva Nimmer and William Bolz. Tickets – $30 per adult and $12 per student – can be purchased at thirdavenueplayhouse.com.