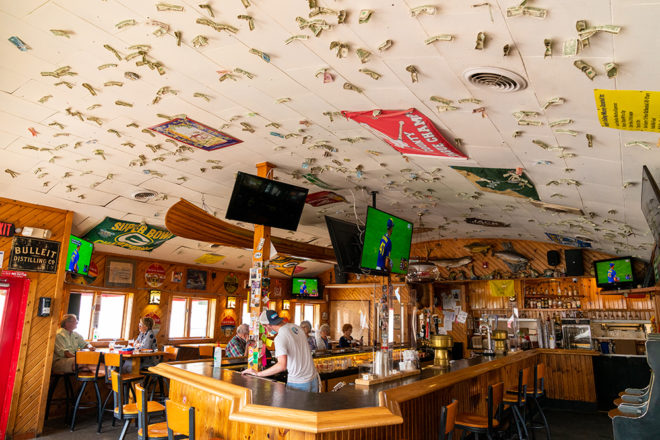 At Husby’s the dollars come down every year to go to a local cause. Photo by Brett Kosmider.

There’s one question that Husby’s bartenders might get asked more often than what’s on tap, and that’s this: “What’s with the dollar bills on the ceiling?”

The answer isn’t free. Patrons have to cough up a dollar if they want to get the goods, and the quest usually involves a few failed attempts at getting their own hard-earned greenback to stick to one of the ceiling tiles using a method involving a well-placed thumbtack, a quarter and just the right arm or wrist action. Some get it on the first try; others never do. Most look pretty ridiculous on their first few attempts — or they’re flat-out dangerous.

But once the bills stick, they’re on their way to a local charity. Every so often, Husby’s managers take the bills down to give them to a local resident who needs help paying medical bills. Last spring the money went to help staff members during COVID-19 cutbacks.

Delmar “Pickle” Olson — who spent nearly 30 years behind the Husby’s bar — said the practice was probably a nod to the Institute Saloon. Customers there have been throwing bills up to the ceiling since longtime owners Phil and Mabel Long ran the saloon, according to Dennis Schartner, who has owned the community landmark since 1994. He said the Institute Saloon’s tradition started during the 1970s, but, unlike at Husby’s, the money hasn’t come down.

When Oscar Johnson bought Husby’s and remodeled it in 1991, he had the upstairs rooms removed to open up a tall, convex ceiling, and the new tradition was born.

Now you just have to watch for falling quarters when you pull up a barstool.