Few animals in Northeast Wisconsin inspire reactions as different as the Cormorant, a bird that represents a triumphant comeback story to some, and a great nuisance to many others.

I first became familiar with these birds when I began banding gulls with Harold Wilson of Ephraim in late June 1962. In the years to follow, Harold gave some evening programs at the Baileys Harbor Town Hall dealing with birds. A few of his slides, dating back to the early 1950s, showed Double-crested Cormorants on Jack Island at a time when these large black waterbirds were already becoming rare. 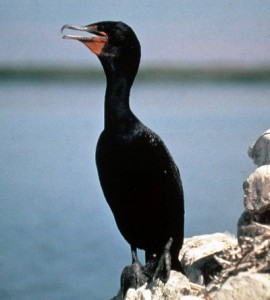 The sharply hooked beak and orange gular sack are good field marks on the Double-crested Cormorant.

By 1973 these birds were listed as an endangered species in Wisconsin, their decline brought about by several factors. Loss of nesting habitats, pesticide from orchard spraying building up in their prey species of fish, and the killing of the Cormorants by irate fishermen who detested their competition, all contributed to their low numbers at that time.

In the late 1970s their population began to increase. The Department of Natural Resources built nesting platforms on islands around the peninsula to help the species recover, and favorite nesting sites in the waters of Lake Michigan and Green Bay, including Spider, Hat, Jack and Pilot Islands in Door County, and Cat Island in Brown County, began to support more nesting pairs. So rapidly did their numbers recover that the state DNR delisted these birds from the endangered list in 1985.

Their favorite foods – including sticklebacks, sculpin, burbot, gizzard shad and round goby – were abundant in the shallow waters around these islands. The Cormorants are not fussy as to what they can catch and eat, aiding in their rapid resurgence.

There are about 30 species of Cormorants worldwide, including six species on the North American continent: Brandt’s, Double-crested, Great, Olivaceous, Pelagic and the Red-faced. Twenty-one extinct species of this ancient bird have been identified from fossils. 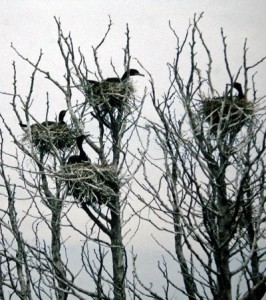 Cormorants, nearly driven to extinction in the early 1970s, have rebounded so strongly that their population must be kept in check. In this photo, the Cormorant excrement has killed the trees, though they still provide good nesting sites.

Among the great quantities of fish they consume are those containing high levels of man-made toxins. These toxins build up to such levels in the Cormorants that numerous nestling Cormorants have been seen with grotesquely twisted beaks, twisted legs and backward-facing feet.

What a beautiful sight it is to see Vs or long strings of these strong fliers barely skimming the surface of the water. I have learned to be skeptical of people reporting 20 or more Common Loons in a flock, necks barely sticking out of the water. Invariably these Loons turn out to be Cormorants. Their flight formations, observed in low-light conditions, can easily be mistaken for Canada Geese.

The Double-crested name of our Wisconsin-breeding birds comes from small tufts of feathers above and behind each eye, seen on both male and female birds during breeding season. These crests are attained by birds when they are four years old. An interesting field-mark of an adult Double-crested Cormorant is its orange gular pouch extending and expanding behind and below the beak.

Cormorants have unusual plumage in that it is not nearly waterproof as that of loons, ducks and geese. Having spent some time under water they head for the nearest land, dock or piling where they proceed to spread their wings to “dry their sails,” like washing being hung out to dry. Absorbing a considerable amount of water makes it easier for these birds to remain under water and allows them to pursue their prey much faster.

Substantial nests of sticks, grass and seaweed are built by the birds in early summer on the ground, rocks, islands, ledges, in bushes and low trees and also on artificial man-made nesting platforms. From clutches of up to seven eggs, incubated for about four weeks, hatch naked chicks. They will remain in the nest for about six weeks and be flying when between six to eight weeks old.

Gradually these skilled “fisher-birds” will leave this region in fall and head for the South. Our friend, Tom Erdman, banded a nestling in the lower Green Bay area in July of 1976. That December it was recovered in Louisiana, indicating at least where some of Wisconsin’s Cormorants winter.

For centuries some fishermen of the orient tamed and taught their small flocks of tethered Cormorants to catch fish for them. A constriction placed around the birds’ necks prevented them from swallowing the fish they caught. One by one the birds were pulled back to the boat where they were relieved of their fish.

So conditioned were the birds to regurgitate their catches for their masters that, when it came time for their owners to have to force feed the birds, the contraction had to be done in reverse. Fish were forced down their gullets and then their necks tied so they couldn’t cough them up. 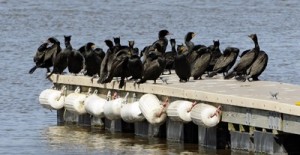 A flock of Cormorants resting, preening and drying plumage on a dock.

Today, the birds’ relationship with fishermen is much different.

The long, slender, powerful hooked beak of this bird is legendary. Commercial fishermen of this region who use pond nets to catch Whitefish have little love for the Cormorants. The birds, naturally attracted to the live-trapped fish, dive into the water, slash the fish in their unsuccessful attempts to catch the too-large prey, and disfigure the fish to the point where they are not marketable.

They also dominate their habitat.

The first summer I set foot on Jack Island in 1962 to help band the Herring Gulls many small shrubs and even some small trees grew quite well, leaving me with the feeling that nature there was in good balance. About 30 years later I returned to that island to find it one undulating mass of whitewashed rocks with nary a sight of a green plant on that entire property.

In late September 1992, while observing birds and other wildlife at the Toft Point State Natural Area, I estimated 4,300 of these unusual birds fishing en masse at the mouth of Moonlight Bay. At times their fishing technique reminded me of a long, drawn-out skirmish line. Obviously those birds swimming underwater were driving the prey species of fish ahead of them and also catching their fair share. There was often a movement of dozens of birds from the back of the slowly moving flock to the front, much frenzied activity accompanied by splashing and flailing of wings.

These prehistoric-like creatures feed, nest and roost in large groups and seldom are far from land. So large are some of their island nesting colonies that most plants, including trees, have little chance of surviving due to the heavy lime deposits from the birds’ droppings. Needless to say these are smelly places due to the droppings, regurgitated fish and offal.

This fascinating bird whose role in nature is little understood appears, like humans, to have both a bad side and a good side. One might call the Double-crested Cormorant the Jekyll and Hyde of the waterbirds.