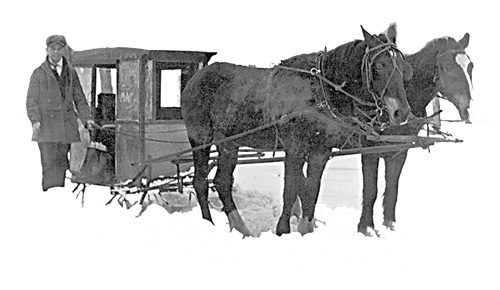 Photo courtesy of Carol Servais and the Miller/Servais family collection.

While the Constitution gave Congress the authority to establish post offices and post roads, it would not be until 1854 that the first post office was established in Door County. Thirty-three years after a post office opened in Green Bay, one opened on Washington Island – the most remote locale along the rugged, unsettled wilderness of the peninsula. Up to that point, fishermen in the area had fish buyers from Green Bay bring them mail during their summer visits. 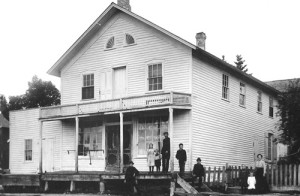 John Anclam’s General Store in Baileys Harbor around 1900. Anclam was postmaster from 1898 to 1915. The post office was located in the addition on the left, but it was unheated space and in wintertime the post office counter was moved into the heated store. Photo courtesy of the Baileys Harbor Library collection.

In 1856 a narrow roadway was cleared from Sturgeon Bay to Egg Harbor, and over time more trees were cleared northward to provide horse-drawn vehicles access to Fish Creek, Ephraim, Sister Bay, and on to Gills Rock. By the 1870s, a primitive post road was in place from Sturgeon Bay to Gills Rock, and more post offices were added. On January 26, 1871, the Postmaster General solicited bids in the Door County Advocate for the following mail routes:

No. 13363. From Little Sturgeon Bay to Brussels, eight miles and back, twice a week.

By 1902, 48 post offices had been established in Door County. Today, only 11 survive, with Jacksonport the last community to lose its post office in 1970. A number of smaller communities that had post offices were associated with logging operations or small settlements of people drawn together by some kind of local commerce. Due to better roads and automobiles – and perhaps better jobs elsewhere – these settlements disappeared.

Between 1901 to 1911, there were 22 rural carriers delivering mail all over the county as part of the “Rural Free Delivery” program, saving farm families that lived a distance from the post office the lengthy trip. The routes ranged in length from 20 to 29 miles, and horse-drawn buggies, sleds, and sleighs were the modes of transportation. Stagecoaches (horse-drawn wagons or sleighs) delivered the mail from Sturgeon Bay to post offices, where the rural carriers picked up their loads and began their route. Ahnapee & Western rail service was a conduit for mail destined for Sturgeon Bay, and later, when motorized vehicles became commonplace, mail was moved over the post roads in a more efficient manner.

Rather than consider all 48 Door County post offices, here is an exploration of two still in existence – Baileys Harbor and Ephraim – and two others, Williamsonville and Foscoro, for which only memories remain.

The eighth Door County post office opened in 1860 as the Bailey’s Harbor post office, but in 1892 the U.S. Post Office Department mandated that the apostrophe was not worth using and discarded it. 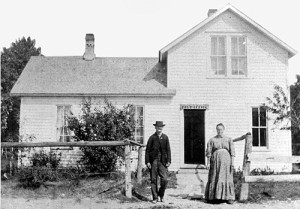 Andrew Hanson and his wife are shown in front of their house along Ephraim’s “lower road.” Hanson was appointed postmaster in 1894 and served for 21 years, operating the post office out of his home (a sign over the door says “Post Office”). The house still stands along Hwy 42 in downtown Ephraim. Photo courtesy of the Ephraim Historical Foundation collection.

Captain Justice Bailey “discovered” the harbor in 1848 when he had to sail his schooner into it to escape a storm. When Bailey returned to Milwaukee he convinced the ship’s owner and Milwaukee industrialist Alanson Sweet that the harbor he found was an especially beautiful place. Sweet bought 125 acres of land where he might develop a community; he opened a stone quarry, built a pier and lighthouse, and lobbied the state legislature to designate his dream town as the county seat. Unfortunately, for reasons surrounded with mystery, Sweet gave up his dreams and abandoned the area. Nevertheless, a few people settled around the harbor.

The first postmaster for the community was Moses Kilgore, who served for less than a year but would continue to influence the community, including pushing through an appropriation in the state legislature for the state road along Lake Michigan. In Hjalmar Holand’s History of Door County, Wisconsin Volume 1, Kilgore was described as “a remarkably energetic Yankee from the State of Maine with a picturesque flow of profanity and unadorned speech which was exceedingly entertaining or dreadfully horrifying according to the temper of his audience.”

As in many communities, the Baileys Harbor post office was located in the local general store. An addition with a simple sign that read “Post Office” stood on the side of John Anclam General Store; but the addition lacked heating, so in the wintertime the Anclams moved the post office counter into the general store.

Ephraim was founded in 1853 as a Moravian colony led by Rev. Andrew Iverson, who along with most of his congregation, emigrated from Norway. Hans Jacobs, one of the original settlers, built a log home on the “Upper Street” (now Moravia Street) and used a small part of the dwelling for a post office, the county’s 10th. Jacobs was appointed postmaster in November of 1861, and for 33 years he served as Ephraim’s postmaster. Ole Larsen, also of Ephraim, was designated to carry mail back and forth between the village and Sturgeon Bay.

In 1894, Andrew O. Hanson, who lived along the water on the lower road (now Highway 42), took over as postmaster and used part of his house as the local post office. He obviously enjoyed being postmaster, for he served for 21 years. Over the years in general, Ephraim became known for the long tenure of its postmasters. Bert E. Thorp, was another long-timer, serving from 1951 to 1983 (32 years), and for much of his term the post office was located in the community’s Scandinavian-style village hall.

The longest serving postmaster in Ephraim was Samuel M. Hogenson, who was appointed in 1915 and handled the village’s mail for 36 years. Over much of that time, the post office was located in James Hanson’s General Store, which is now a restaurant called, of all things, “The Old Post Office.” A rural free delivery route was established in Ephraim in 1904, and the postman for the route was Martin Evenson.

About 12 miles south of Sturgeon Bay, there was a community of 76 people clustered around a sawmill, store, boarding house, barns, a blacksmith shop, grist mill, and a number of houses and outbuildings. It was a hamlet established thanks to the success of the sawmill and shingle factory operated by the Williamson brothers (Tom, Fred, and John). On January 3, 1871, the village was officially designated, and a post office was created, with John Williamson as its postmaster. It was the 17th post office to be founded in Door County, and just 10 months later Williamsonville would disappear. 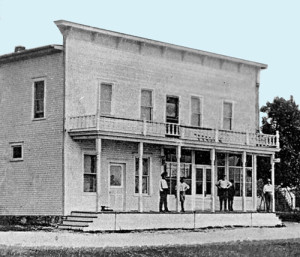 James Hansen’s General Store in Ephraim around 1900. Sam Hogenson was postmaster, and the post office was in one corner of the store. Hogenson served the community for 36 years. The building still stands along Hwy 42, although it is now a restaurant with lodging upstairs. Photo courtesy of the Ephraim Historical Foundation collection.

When the famous Peshtigo Fire made its way around Green Bay the inferno continued northward into Door County, and Williamsonville was in its path. Newspaper editor and historian Charles Martin helped drive a wagon load of supplies into the area two days after the fire. He recalled the experience as one he would never forget, for the air was stifling with dense smoke from still burning timber and the odor of smoke was mixed with odors of wild and domestic animals roasted alive.

In his book History of Door County, Wisconsin Martin described what he saw:  “The sight was the most horrible imaginable! Dead bodies were strewn in all directions; and most all burned beyond recognition. Something like thirty-five bodies lay in one heap!”

Although only 17 people survived, those who remained set out to re-establish a community. They did so, changing the name to “Tornado” to commemorate the great tornados of fire that raged through their community.

The post office was closed in 1907, and on March 26, 1974 what was left of the Tornado Post Office was subjected to a controlled burn by the area’s fire department. A stone marker with a plaque along Highway 42 remains to tell the story of the hamlet of Williamsonville.

Along the Door and Kewaunee counties’ border, Stoney Creek had been dammed upstream to provide power for a large sawmill where a community grew. The small hamlet along Stoney Creek had a large boardinghouse, warehouse, store, post office, telegraph office, a number of houses, and a tavern. It also had a 1,000-foot long dock that extended out into Lake Michigan where schooners could load a constant supply of boards and cordwood generated by the sawmill.

According to historian Hjalmar Holand, the area (which included Clay Banks) was “doing more shipping than any other port in Door County.” It all started when three lumbermen discovered the area in the early 1860s, and they pooled their resources to build a sawmill and a community. Although their first names are forgotten, Mr. Foster and Mr. Coe from Port Washington and Mr. Rowe from Chicago combined the first part of their last names and came up with a name for their community:  FOS-CO-RO, or Foscoro. 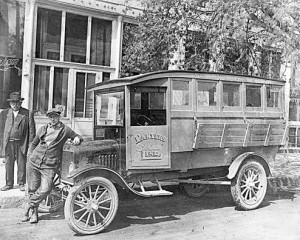 The Ford Model T bus purchased by Charley Panter to provide mail and passenger service between Baileys Harbor and Sturgeon Bay. The person leaning on the hood is probably Hank Schultz, the driver, who bought the bus from Panter. The fellow in the background looks as if he just stepped out of a nearby tavern. Photo courtesy of the Ephraim Historical Foundation collection.

Another name important to Foscoro was Charles Fellows, a captain who lost his schooner Whirlwind in the financial panic of 1857. Later he moved to Foscoro, where he established the county’s 19th post office in 1871 with George Rowe as postmaster. A year later Fellows became postmaster.

Fellows was active in community affairs, and he almost singlehandedly kept the community going for awhile in spite of the collapse of the timber industry after all of the timber that could be harvested profitably had been cut and the sawmill closed.

In 1894 Fellows attempted to have the Postal Service change Foscoro’s name to “Stoney Creek,” for this is what the locals called the hamlet. However, the Postal Service continued to recognize the Foscoro post office name. In the end, it did not make much difference, because the post office was discontinued in February of 1902. Today only the ghosts of Foscoro remain.