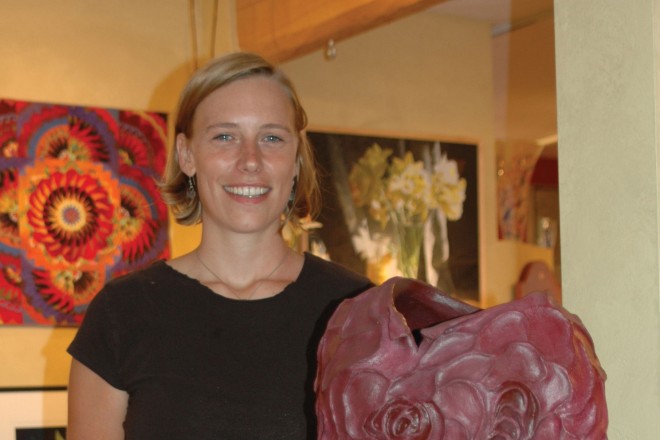 One of the best things about an artist’s community like Door County is that it’s not only a supportive and safe haven for established artists, but it also occasionally pulls its resources together and launches a brand new career. This happened with sculptor Stephanie Evans, whose work can currently be experienced exclusively at Fine Line Designs Gallery in Ephraim. And her work is truly to be experienced, not simply viewed. Stephanie’s medium is “hand built ceramics” realized in the form of life sized, three-dimensional dresses, each with its own personality. When you approach one you feel like you’re meeting a new friend.

From the moment Stephanie arrived in May 2003, after graduating from the University of Wisconsin-Milwaukee, she was embraced by the Door County arts community. Her parents, Pete and Theresa Evans are well known local musicians on the mandolin and hammer dulcimer respectively. The Evans had an immediate connection with friend, performer, and potter Rich Higdon who offered space in his studio for Stephanie to work. As one of the first participants in the Peninsula Art School’s Emerging Artist Program, Rich told Stephanie about it; she applied and was accepted in 2004.

Stephanie was off to a great start and though she initially planned on staying only 6 to 12 months, as a breather between college and graduate school, things were working out too well to leave. She worked that first winter creating pieces for the Emerging Artist show in the spring. Connie Hatch of Fine Line Designs, who loves discovering new artists, was attracted to Stephanie’s work and paired her up with one of Door County’s most exciting painters, Pam Murphy, for the 2005 gallery show. “This was the biggest thing I’d ever done professionally. It was such an honor to be asked to show with Pam. I mean, when I’m in my own little world, I feel good but then I had to think about bringing my pieces into a room filled with Pam Murphy’s and I was very nervous. I am so pleased the way it turned out; it was a really beautiful show.”

Having just finished an intense period of work and exhibiting, Stephanie was taking a break from her studio when I interviewed her. I wasn’t able to watch her work, but she described her process to me as one of “slip and score.” She takes a big chunk of clay and rolls it into a large coil. The “slip and score” part comes as she assembles the coils of clay. “I ‘score’ the edge of one side by using a fork back and forth. The ‘slip’ is liquid clay that I brush on the scored area. [Then I] take another scored coil and ‘moosh’ them together. I shape a lot with paddles and I have a big stick that I use to push [the clay] out from the inside. Once the coils are together I smooth it all out and then I’m constantly forming as I go along. Occasionally I stamp designs for additional texture on the exterior of the dress before it’s fired in a huge kiln.”

I moved to the next obvious question. Why dresses and where does she get the inspiration for so many different designs? “I get my best inspiration when I’m actually working on a piece,” Stephanie explained. “You’re in this room and your internal dialogue is kind of your own entertainment as you work. I don’t use period costumes as a resource, for instance. The line and design of the dress emerge from the work.”

Her grandmother, a bird lover, was the subject of her first dress, titled “Ruth,” and the identifying piece that she added incorporated two birds. These identifying pieces became the heart of the creation of each dress. “Starting at a very young age I had experienced quite a few people close to me dying and I knew I had to keep some of these memories alive through objects,” said Stephanie. “I’m just fascinated by the idea that inanimate objects can carry this energy with them and I wanted to do work that captured that.” Lately these objects have become more symbolic. The blue dress pictured in this article, for example, has an anchor attached which was inspired by Stephanie’s decision to make Door County her permanent home.

Stephanie feels fortunate to have been one of a coterie of ceramics majors at UWM who formed a warm cocoon of support for each other. Due to renovations the department’s studio was moved to a large warehouse space where students could work without restrictions of time or space. As an afterthought she said, “Maybe that’s why my pieces are so big.” She continued to reminisce, “It was this neat little bubble of time that we spent together always talking about ceramics and it never occurred to any of us that we wouldn’t be doing this for the rest of our lives. We were competitive but it was supportive competition.” And that’s what Door County has created for Stephanie, another warm cocoon of support. From her “studio-mate” Rich Higdon and fellow potters David and Jeanne Aurelius and Brian Fitzgerald, to painter Pam Murphy, and of course to the Peninsula Art School and Connie Hatch of Fine Line Designs, this “village” has succeeded in nudging a budding professional artist on her way.

Finally, I asked Stephanie if she thinks of herself as a “sculptor.” “It’s getting there,” she answered. “There are days when I feel that I’m completely on the right track. For me it’s hard because my pieces are so large and they take a considerable amount of time to build. Like any artist I hope that in the future I’ll be able to focus more on my art and less on needing other jobs to live. The important part, though, is that I love it here in Door County and I have the best support system in the world: my parents, my colleagues, and a wonderful man in my life. I’ve found my home base and couldn’t be happier.”