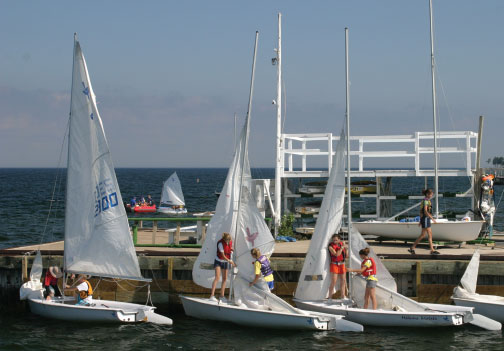 Ephraim Yacht Club sailors rig their sails for a day on the water.

In the early 1900s, Ephraim was becoming a popular summer vacation destination. Many of the summer families had a love of the outdoors and were particularly interested in boating. Year-round residents shared this pursuit and the idea of a yachting club came to fruition on July 24, 1906. Founding members numbered just 23, but included families whose descendents are still active in the club today. Sailboats, powerboats and canoes were all a part of the early fleet. Though a site for a clubhouse and permanent dock would not come for some years, the Ephraim Yacht Club flourished.

The newly renovated EYC clubhouse and dock are now a familiar part of the Ephraim waterfront, but it hasn’t always been so. With the successful formation of the club and participation in club events growing, members began to pursue the idea of a dock. In the summer of 1926, a 700-foot wooden dock was constructed in front of what is now the historic Village Hall. But Mother Nature intervened and that fall a combination of high water and heavy storms destroyed the dock. In 1929, Mr. B.D. Thorp built a dock in front of his hotel, the Eagle Inn, for use by the EYC. During the depression years that followed, dreams of a clubhouse had to be put on hold. The yacht club was kept afloat by the dedication of its members. Officers of the club rotated through the same positions and kept the regatta running. The ladies of the club held fund-raisers and donated proceeds to the club. By 1939 things were looking up and the clubhouse was finally built. Though it has undergone many changes, the location has remained the same to this day.

In the early years of the Ephraim Yacht Club, members decided that the club should be a place for families with a special focus on the boating education of its younger members. This decision has stood the test of time and today the club is home to a variety of activities for all ages. Sailing instruction, weekly races, social activities and ladies bridge groups all take place at the EYC.

Promotion of safe water-sports is the mission of the sailing program at the Ephraim Yacht Club. The program includes group youth lessons as well as private lessons for all ages. All EYC instructors are US Sailing certified. An aspiring young sailor may begin lessons at age nine. Students will progress through three levels of instruction with a written exam at the end of each session. Racing rules are taught and students are encouraged to participate in the weekly races held at the club. The yacht club owns and maintains a varied fleet of sailboats which are used for lessons, including Flying Scots, JY’s, Sunfish and Optimist prams, a new addition this summer. No previous sailing knowledge is required, but students should be prepared to get wet and have fun. The first day of class includes a swimming test and the challenge of putting on a lifejacket (PFD) while in the water. Safety is an on-going priority and PFDs must be worn at all times while on club boats. Some students carry this to other aspects of the lessons as well. It is not unusual to see a group of students and instructors wandering down Highway 42 in the direction of Wilson’s Ice Cream Parlor wearing their PFDs on hot summer days!

Weekly races are held for sailors. Spontaneous cookouts frequently follow the evening races and the end of the EYC dock is one of the best sunset viewing spots on the peninsula. The Ephraim Regatta, two days of sailboat racing, is held the first weekend in August and many sailors use the weekly races as practice sessions for the “big event.” Weekly races and the regatta are open to all participants, but only club members may use club boats and equipment. Race schedules and information may be obtained at the club or on the club website www.eyc.org.

The EYC hosts a variety of social events for its members during the summer months. An Ice Cream Social kicks off the July 4th weekend, and potlucks, coffees and picnics are hosted throughout the summer. The Bratfest, an annual favorite, is held on regatta weekend and junior activities are held for younger members once a week during the summer. Past activities have included sailing picnics to Nicolet Bay or Horseshoe Island, attending a performance of the American Folklore Theatre and scavenger hunts all over downtown Ephraim. These events are great fun and many members happily recall their own experiences when children and grandchildren participate for the first time.

In the summer of 2005, the 100th Annual Ephraim Regatta will be held and will kick off the Ephraim Yacht Club’s Centennial Celebration. Plans for the celebration include bringing back old traditions and creating new ones. One hundred years of sailing, camaraderie and memories. With pristine Eagle Harbor as its home, the EYC has grown and evolved over the years, and there will always be an Ephraim Yacht Club.

For more information about the Ephraim Yacht Club, please stop by the club during the summer months or check out the club website at www.eyc.org.