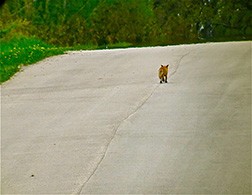 A boy at the mall grabbed his mother’s arm with one hand, and with the other he pointed at me. “Mom, it’s the snake guy.” This is one of the hazards of doing school programs with animals. In teachers’ lounges some would actually leave if they thought I had a snake. Even so, it was pretty cool being introduced to a classroom full of kids, or to an audience of adults, who expected to see a live animal. It was a way to quickly connect, and to get people to interact.

I often explained that snakes won’t bother you, as long as you “leave them alone!” But there I was, in front of the class, holding a snake, not leaving it alone. This mixed message put me in mind of my father. He’d smoked for many decades and would always admonish us kids never to smoke. Actions speak louder than words. Despite his advice, I tried to become a smoker but luckily it didn’t happen, not because of what Dad said, but because I always choked on cigarette smoke.

I’ve used other animals, including a hawk, which, of course, is a silent soaring hunter. Since a lot of memory tends to be visual, there’s a good chance that in time my audience would forget what I said either about snakes or about the particular bird being flightless due to injury, or about the value of predation, habitat preservation, etc. But they might remember that a guy carried a captive critter around. My programs could unintentionally deliver a subliminal message of dominance over nature. Actions speak louder than words.

In a classroom the critter is totally out of its ecological context. This can make it difficult to relate to its role in nature. Like trying to understand an oak tree by looking at a severed twig. When I was a fledgling naturalist I focused on physical characteristics. I’d point out that snakes were cold blooded, vertebrate, egg layers, etc. But people’s questions almost always revolved around family stories, myths, or relative danger. My program had to evolve.

When our kids were small I took them to an outdoor animal park. A fox languished in its enclosure, ignoring the people who were walking by. The label on the fence said it was a fox.

Ironically, next to my shoe, outside the fence, lying on the woodchip trail, was a fox dropping from the previous night – dark brown, pointed, with hair, and with a couple shards of bone visible. This was tangible verification that we were sharing this trail with a mysterious invisible presence, the existential fox. It was as if they were of two different entities. One was a warm-blooded vertebrate with reddish hair. The other was not to be seen.

During a nature hike some fifth graders once found a white chalky object along a trail. One girl asked what kind of cocoon it was. I picked it up and found some rabbit hair and a rabbit claw; a jawbone from a shrew (looking like a Lilliputian Cujo); a cherry pit; and bits of a grasshopper’s exoskeleton. It began to dawn on the kids, this was no cocoon. It was telltale evidence of the existential fox. Without seeing one, we discovered that foxes live there, and that their diet is diverse. 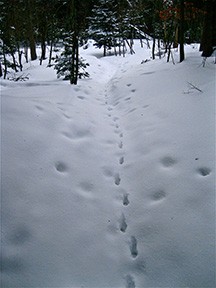 When you experience a fox in the wild, mammalian characteristics may be irrelevant. There are other signs, such as: a narrow (no more than 3 1/4-inch wide) trail in the snow that goes mostly in straight lines; a medium-sized, dog-like paw print with a ridge across the “heal;” or a pungent, almost skunk-like odor on a winter breeze.

You can sometimes tell when you’re passing through a fox’s territory. You are relating to the nature of the fox, as an integral part of what Aldo Leopold called the “land organism.”

We have historically tended to see things in isolation. Redwood trees, for example, were considered very large reservoirs of wood, and were to be “harvested.”

Thankfully the lumber barons were stopped before they could destroy all these magnificent trees. Only recently have we learned about the complex and mysterious ecosystems that exist in the canopies of sequoia and redwood forests. They are literally reservoirs of life. Now we know that destroying old growth merely for the wood is (as E.O. Wilson might put it) akin to burning a Renaissance painting to cook a meal. The loss far exceeds any gain.

One of my favorite books is The Little Prince by Antoine de Saint-Exupéry. In it, the little prince is taught a valuable lesson by the fox. “It is only with the heart that one can see rightly. What is essential is invisible to the eye.”

When you walk in a forest, this is certainly true. The vast majority of life, from soil microbes to snakes to insect larvae, is quite invisible.

We are a part of nature, not apart from it. We have much in common with our fellow critters. To begin to understand what it means to be a fox is to glimpse our own connections to this beautiful planet. To see the forest, not just the trees, is fundamental to treating our world, not as commodity, but with love and respect.

Gazing into an enclosure at a fox, we can learn that it is a warm-blooded vertebrate, a mammal, with a funny name, “Vulpes vulpes.”

But most of us probably wouldn’t think about shrews, or rabbits, or acorns, or grasshoppers, or any other of a thousand hints of the existential fox. For that to happen we need to “get into the habitat.” Thanks to such entities as parks (both national and state), Door County Land Trust, and The Nature Conservancy, there are opportunities to do just that.