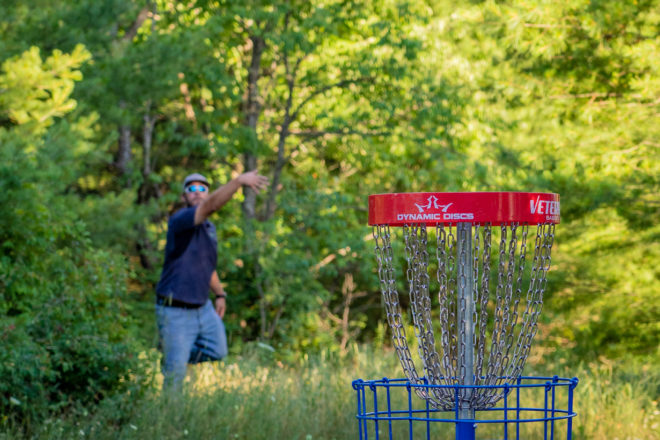 Disc golf has one objective: to get the disc into the basket. And a decade after the first course opened on the peninsula, the disc-golf scene is definitely gaining momentum here.

Shane Solomon got into the game after being injured as a college athlete because with disc golf, he could still play a competitive sport. He’s now played for more than 20 years.

Door Disc Golf – the store he co-owns with league buddies Jordan Zacek, Kaden Stahlke and Bjorn Anderson – opened in Fish Creek in April 2021 and is a passion project that was six years in the making. Besides being the only gear seller except for much larger retailers, the store and the league of the same name have helped to build the county’s newest disc-golf course in Baileys Harbor.

The 18-hole course, known as Wild Berry Fields, was completed in 2020, but Solomon said there are still plans to add more signage. Door Disc Golf and its volunteers also maintain three of the county’s four courses.

“I don’t think any of us have taken a paycheck from this place yet,” he said. “It goes back into the community.”

Two other courses – in Jacksonport and Sister Bay – are nine-hole courses that opened within three days of each other in 2017 and, Solomon said, fall into the first of two course categories: Their baskets are set farther from the tee, but they’re relatively open, with fewer obstacles in the way. The course in Baileys Harbor is more obstacle driven, with shorter holes and an emphasis on accuracy over arm strength.

The course in Baileys Harbor has baskets in the woods, for example, as well as a high grass field and a tree on #13 that, Solomon said, is affectionately called the “FU Tree.” At Jacksonport, the baskets are mostly in a straight line from the tee, but difficulty changes according to which of the color-coded tees – red is easier and blue harder – players choose.

Door County’s fourth – and original – course is in Sugar Creek County Park and is a more obstacle-driven, 18-hole course. After it was established in 2012, it remained the only one for five years.

Solomon attributes the sport’s recent growth on the peninsula to the pandemic because disc golf is an outdoor activity in which people can easily distance themselves from others. Its success means that more courses could be on the way.

Solomon said Ellison Bay had agreed to set aside $15,000 for a disc-golf course there, and he’s talking to Sturgeon Bay and Fish Creek about adding courses in those communities as well.

As popular as the silent sport is with many people, there are others who are resistant to seeing new courses pop up in the county. In those cases, Solomon said, communities tend to back off – but most of the resistance has to do with misunderstanding.

Because the courses are usually in parks, he said, people worry about natural areas being destroyed. His preference, however, is to work with nature – such as the “FU Tree” that Solomon and his team discovered while scouting the Baileys Harbor course. As soon as they saw the tree, they knew they had to keep it because it slopes down to cover nearly the whole fairway in the forest. They viewed it as an amazing bonus feature rather than something to remove.

While walking through the courses, the natural area doesn’t feel destroyed or disturbed. In Baileys Harbor especially, it feels more like a forest and a field with an occasional metal basket and turf pad.

The environmental impact of disc-golf courses can be less than hiking trails, mostly because fewer people use them, and in less concentrated spaces. Multiple pins – the poles that the baskets sit on – also decrease wear and tear on the terrain because their locations can be moved.

Another perk of disc golf is its accessibility. Getting involved isn’t difficult, and neither is learning how to play. Each Thursday, the Door County league holds a casual doubles night at the Baileys Harbor course. It’s low stakes and low stress because newer players are usually paired with more experienced players, though they’re welcome to play with anyone.

Solomon said that any level of player should feel comfortable joining – just like shoes, discs must be broken in, too.