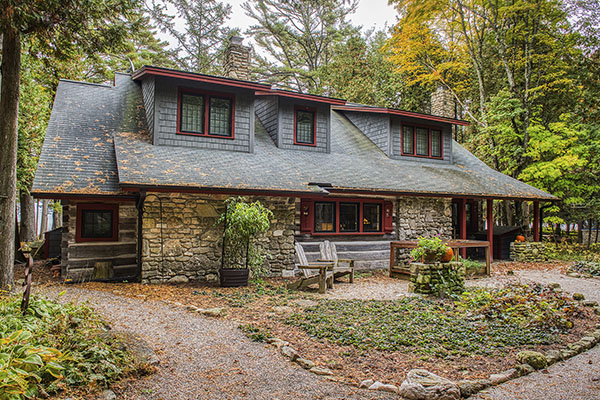 Just south of Baileys Harbor is a small stretch of road that’s much like the Door peninsula itself: not on the way to anything — a destination unto itself. The dead-end road is tree lined and quiet, and walking there feels like stepping into a fairy tale.

What makes this road so unusual are the log cabins that line it: beautiful, two-story homes with dormers and other architectural details that make “cabin” a most inadequate descriptor. Made of dark-brown logs, often with contrasting white chinking, the buildings sit on separate properties but clearly look as though they belong together. As if to declare their independence, however, each cabin has its own brightly colored trim colors: One uses forest green and red; another has aqua doors and brightly painted shutters.

In addition to the main cabin, each property has at least one outbuilding — a garage, smaller cabin or even a treehouse — that’s built and decorated in the same style. Each property manages to look both historical and whimsical at the same time, as if a person from long ago or a character from a children’s book could appear on the scene at any moment.

The story of Chapel Lane’s log cabins begins with Frederick deForest Schook of Chicago, who was an artist and a professor at the Art Institute of Chicago. Schook studied in France under renowned painter Henry Ossawa Tanner, then moved to Chicago and spent several summers painting in Maine.

Schook and his wife “were deciding whether to have a summer home in Maine or here in Wisconsin,” explained Richard Cole, one of Schook’s grandsons. “They chose Wisconsin for several reasons — not the least of which is that it’s closer to Chicago — but primarily because it’s very much like the coast of Maine. So they chose Door County.”

In 1921-22, Schook purchased land on what was then Muckian Road — basically a dirt path just south of Frogtown Road — and built a summer home there.

William Tishler, a Baileys Harbor native and University of Wisconsin–Madison professor emeritus, is a respected landscape architect who has authored two books on Door County history and did extensive research in the 1970s about the Chapel Lane cabins. According to Tishler, Schook was inspired by other log buildings he had seen on the peninsula.

“Schook purchased a barn from the Charles Honold farm … to use the logs from it to construct a cabin,” Tishler shared from his original research presentation to the Door County Historical Society. Tishler learned that several farmers had then moved the logs to Schook’s property and reconstructed them to create the frame of the cabin. Two carpenters from town — Frank Oldenberg and Tishler’s father, named Bill Tishler — were then hired to put on the roof and do the other finishing work.

Around that time, soldiers were returning from World War I, and some had what was called, at the time, “shell shock.” The Soldiers Rehabilitation Act of 1918 created funding for rehabilitation programs, and the Art Institute of Chicago used funds from the act to establish a camp to provide art therapy for soldiers.

Schook and Victor Poole, a friend and fellow professor, ran the first camp in 1922 on land around Schook’s cabin. Forty-five soldiers participated. What became known as the Frogtown Art Colony ran for three summers and served as the county’s first art school.

Schook designed several other cabins along the road, including the one at 7732 Chapel Lane and the one at the southernmost end of the road, currently known as Hoke’s Seven Gables. He designed the cabin directly south of his own for Francis and Anna Belle Cole.

“The family immediately next door to the south was my other grandpa — Grandpa Cole,” explained Richard Cole. “He and my grandpa Schook were good friends in Illinois because Grandpa Cole’s oldest son, Fred, was a painting student of Grandpa Schook.”

Cole remembers many of the original cabin owners and recalls it as a tight-knit, social community. He said Poole and his grandfather were very good friends.

Poole had also decided to build a summer home in the area for himself, choosing a spot slightly farther from the lake. Today it remains the only cabin on the west side of Chapel Lane.

“Chapel Lane actually runs behind the cabins,” said Amy Cole Rizzico, who is Richard Cole’s daughter, one of Schook’s great-granddaughters and a current owner — with her siblings and cousins — of Schook’s original cabin.

The name “Chapel Lane” comes from the fact that, for a time, it was the only way to get to the Boynton Chapel at Björklunden. The road still dead-ends at an archway with a dirt path beyond. Written on the archway today are directions to Björklunden’s main entrance.

Roy Cole (no relation to Richard) and his wife purchased the property known as Loc Haven in 2001. Roy spent a year researching the cabins’ history for a 2019 presentation to the Baileys Harbor Historical Society. He said the current owners all feel a sense of responsibility for their shared history.

“It’s a tight-knit community of people who care for these homes.”

“The more that can be done to make sure that the community that’s there now knows [about the history], the better, so they can … become part of that story,” she said.

“My hope is that the character of what’s [on Chapel Lane] will continue to be taken care of,” he said. “In my view, it could be a historical district. Because most of [the cabins] remain relatively untouched, they have pretty great historic value.”

The Art on Chapel Lane

For Amy Cole Rizzico, the great-granddaughter of Frederick deForest Schook, the history of Chapel Lane is personal.

“I grew up going [to Schook Shack] every summer. It’s near and dear to my heart. It was my grandparents’ house, as far as I was concerned.”

So although she definitely has some “universal” Door County memories such as fish boils and cherry picking, Rizzico said her great-grandfather’s artistic legacy has always been part of her experience here.

“It’s always been talked about. I grew up with all of [Schook’s] original artwork [on the walls],” she said.

Rizzico adds that for her, the cabin itself is a piece of art.

“My great-grandfather also built a lot of the furniture that’s in the building. For example, the kitchen table and benches are all built into the cabin, and they’re painted with designs.”

Rizzico admits that she didn’t realize at the time how unusual it was to grow up surrounded by art and artists the way she did, but she clearly remembers an important lesson: “I was taught that being an artist was important.”

Rizzico has drawn and painted from an early age and shared that during one of her summer visits, her grandmother Dorothy let her use her great-grandfather’s paintbrushes.

Perhaps it’s no surprise that Rizzico herself is an artist, with a master’s degree in painting from Cranbrook Academy of Art. Today when she paints, instead of using Schook’s brushes, she uses his crank easel from the art studio on Chapel Lane. She also sees similarities between her own work and that of her great-grandfather.

“The balance of colors and the way that he worked with color probably influenced me quite a bit.”

As for Schook Shack, Rizzico is proud that her family continues to own and preserve the cabin.

“I feel very lucky that it’s still in our family. There’s so much family history woven into the place.”