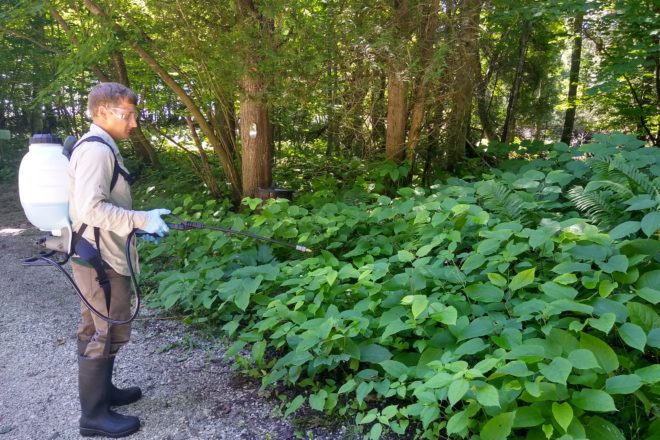 Public Enemy No. 1 among invasive plant species may change over the years, but one ecological horror-story theme remains the same.

In this case, she was talking about Japanese knotweed, “a really bad plant” that has bamboo-like stalks, a cascade of green leaves in the summer, and a delicate, yellowish-white, erect bloom. Like many invasive species – such as the garlic mustard that is steadily choking out more and more native woodland wildflowers in Door County and nationwide – Japanese knotweed arrived in the United States as a decorative plant.

The problem is, its expanding network of large roots is strong enough to crack driveways and shove foundations and basement walls.

“Your above-ground growth is only a portion of what there is,” Koyen said. “That root mass is larger underneath – like an iceberg.”

Door County received grants last year and this year to try to eradicate four invasive plant species: Japanese knotweed, phragmites, teasel and wild parsnip. All four plants can create their own monoculture as they spread, dominating their surroundings and choking out desirable species.

Koyen’s group sent permission slips to private-property owners seeking permission to gain access to land where the team had spotted the invasives.

“If you got [a permission slip], remember to send it back in,” Koyen said.

There’s still time for property owners to contact the team to be included in invasive-plant eradication efforts, but that window of opportunity will close as grant funds are spent or as the ideal treatment time passes.

Grant money boosts the county’s pest-control budget, and this year the grants target those four invasive plants that can cause harm to people and property. In the case of teasel – which can spread quickly, often at intersections along highways – the tall plant with a green, thistle-like bloom can affect motorists’ sight lines.

The same goes for phragmites, which lines long portions of median and some exit ramps between Green Bay and Door County. The tall grass has a feathery seed head and grows in dense stands similar to, but often taller than, cattails. It gained 20th-century popularity in mine reclamation, around industrial areas and along highways, but it can block the views of motorists and boaters.

In addition, phragmites doesn’t host many native organisms and rapidly spreads, crowding out other plants and creating small environmental deserts. Phragmites can impede and alter the flow of streams and runoff because it grows so closely together.

Door County is trying to halt the spread of phragmites – which occurs sometimes by seed but mostly by rhizome (root runners) – and the spread of teasel while there’s still a chance to have the upper hand.

“It’s always a best management practice [to pursue] strategies that have the highest chance of success,” Koyen said.

She said this year’s fourth targeted species, wild parsnip, can actually cause injury. She has a burn scar on her arm from when it was spattered with the plant’s liquid-like sap during an eradication project. The sap from the leaves and stem of the wild parsnip and its flowers can make skin hypersensitive to sunlight and cause a severe burn – a reaction called phytophotodermatitis. Koyen’s team uses a combination of chemical and mechanical (root-cutting) to kill wild parsnip.

As of early April, the Door County team recruited six local municipalities to join the cost-share program on invasive-species eradication. Those include the towns of Clay Banks, Forestville, Liberty Grove, Nasewaupee, Sevastopol and Sturgeon Bay. All six will allow invader-killing measures on public property, and they will mail permission slips to private-property owners.

In Sevastopol, the grant helps the town hire a certified sprayer to kill Japanese knotweed and phragmites, and the county reimburses the town. The county takes care of teasel and wild parsnip. Town clerk and treasurer Amy Flok said many landowners in Sevastopol signed up for spraying of phragmites in 2019, 2020 and this year. Some residents have donated to a fund to help the township kill nonnative plants.

“We want to make it as cost effective as possible for our residents because we want to eradicate the problem,” Flok said.

Although Door County’s Soil and Water Conservation District has a relatively large Invasive Species Team, eliminating some troublesome invasive species such as garlic mustard and buckthorn – a prolific and aggressive shrub – are beyond the control of the county’s resources this year. In fact, Koyen’s group has asked local villages and towns to lead their own battles against some of the other species.

County residents may contact Koyen or village officials such as Lydia Semo, the environmental sustainability coordinator for the Village of Egg Harbor, for help identifying which invasive species, if any, have taken root on private properties. In the case of garlic mustard, experts such as Semo and Koyen can help people identify the plant and advise them about how and when to treat it, and how to bag it securely against seed dispersal for landfill disposal.