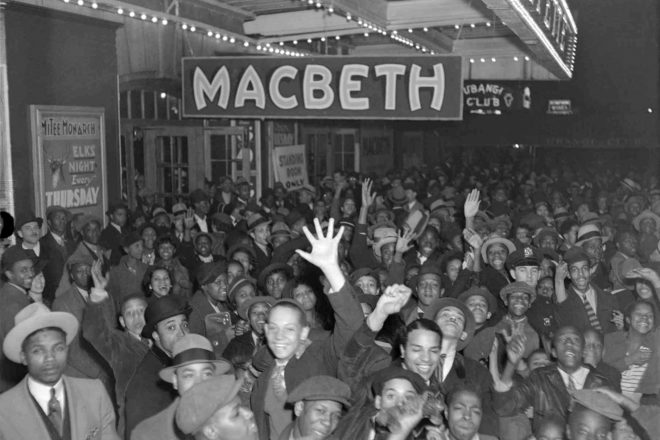 Actors with the Negro Theatre Unit performed for sold-out audiences with material that ranged from contemporary drama to biblical comedy to the unit’s most successful production, “Macbeth.” Photo courtesy of the Library of Congress.

Last week we looked at how the Federal Theatre Project (FTP) – a federally funded theater program born out of the New Deal – made great strides in providing struggling artists with a financial safety net following the Great Depression.

But the FTP was also a platform for presenting progressive ideas to a nation that was hungry for progress. The inherently political nature of the plays performed as part of the FTP’s Living Newspaper program began to grate on the powerful in America, even while public reception of the material was generally favorable.

Meanwhile, another arm of the FTP was taking massive strides for African-American theater – movement that was growing equally concerning for the FTP’s opponents.

The Negro Theatre Unit was established to uphold the Works Progress Administration’s antiracial prejudice policy and put on its first production in New York in 1936. There was a massive number of racially diverse and underrepresented artists who were employed by the FTP, so units were formed to give platforms to minority artists. The New York Negro Unit was one of the largest, but chapters were established across the United States.

Two branches were formed within the Negro Theatre Unit: One focused on new works, and the other specialized in classic theater. Both, however, were inherently interested in messages of racial equality and providing a platform for Black art. In Harlem, actors performed for sold-out audiences with material that ranged from contemporary drama to biblical comedy to the unit’s most successful production, Macbeth.

Largely remembered as Voodoo Macbeth, the production was critically acclaimed for its unusual adaptations of moving the setting from Scotland to the Carribean, and featuring an all-Black ensemble. Its success catapulted the career of its director, Orson Welles, out of a post-Depression slump. The 150-member cast – which would be unheard of today – provided a sense of grandeur that contributed to elevating the production to its legendary status as one of the most influential landmarks of African-American theater.

Despite Negro Theatre Unit plays being well attended and favorably received by audiences, controversy began to stir from the unit’s very inception. Though most of its members were Black, many white individuals were situated in the upper levels of the unit’s hierarchy. Even the relationship between Welles and the cast of Hamlet was strained early on. Things smoothed out as production went along, but there were instances of white project managers being removed from their duties on other productions because of incidents involving segregationist ideologies.

Beyond the internal disputes, dissent was mounting among certain members of the American establishment who were increasingly pushing to reduce funding to arts programs that promoted progressive messages. It was at this time that the House Un-American Activities Committee began to leverage the Living Newspaper’s progressive agenda and the Negro Theatre Unit’s platform of racial equality against the larger Federal Theatre Project under the guise that the Communist Party had infiltrated the FTP.

Next week we’ll look at how Congress ended the Federal Theatre Project only four years after it began.