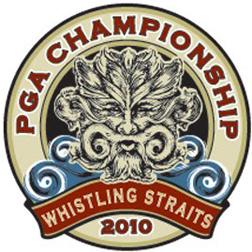 Thanks to one of my “work perks” and some running around from our news and features reporter, Myles Dannhausen, my husband and I were able to score two tickets to Sunday’s PGA Championship at Whistling Straits. Thankfully, the heat and humidity had subsided on that final day of the PGA’s final major of the year, making the trek around the beautiful links style course along Lake Michigan a very pleasant one.

Cameras and cell phones were not allowed, so my only memories are the ones in my head and the ones being replayed on the Golf Channel and ESPN. While spending about eight hours traversing the course and watching the world’s best play one of the world’s most challenging, I could not help but think throughout the day that I wasn’t in Wisconsin anymore.

With the potbelly bunkers, the protruding moguls, the windswept fescue, it felt a lot more like Fife, Scotland than Kohler, Wisconsin. Even the radio announcers became lost in the enchantment and twice mistakenly referred to Lake Michigan as “the ocean.”

Phil Mickelson had commented that his only complaint about Whistling Straits was that it is not very spectator-friendly, partly due to the steep and slippery terrain. I felt that my fan experience was much the same as the golfers – the course was full risk and reward. If you were willing to take the risk to climb a slippery hill, or jump on top of a mogul, you enjoyed a beautiful, unobstructed view of the action. But I witnessed at least a dozen fans whose risk resulted in embarrassing tumbles.

Upon entrance to the tournament and compliments of American Express, each fan received an earpiece with a live feed from Sirius radio, offering up to date scores and commentary. It was a great tool for us fans who could only watch two golfers at a time, yet stay posted on minute-to-minute happenings around the course. A distant or nearby roar from the crowd was often quickly explained.

After spending most of the day walking the course, we found a great spot on the back nine to settle in and watch the leaders come through. We sat atop a small mogul facing #14 green, with #13 fairway and Lake Michigan behind us. 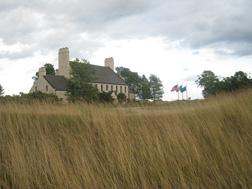 The clubhouse at Whistling Straits. Photo courtesy of PGA of America.

It was an excellent, close-up experience. We watched the cream of the crop from the final groups at a crucial time in the tournament, yet without the crowd congestion of the final holes.

Since #14 was a short par four, we weren’t far from the landing area and could watch both the approach shots and green play. I witnessed big bombers Bubba Watson and Dustin Johnson both nearly drive the green, with just 20-yard chip shots remaining.

Crowd favorites among the leaders were definitely Americans Johnson, Watson, and the young Irishman, Rory McIlroy. The elder Aussie contender and past PGA Champion, Steve Elkington (who does not even have a tour card) received warm welcomes as well. It is a bit strange to think back now that we watched the champion-to-be, young Martin Kaymer from Germany, receive a very reserved Midwestern, obligatory applause.

I was amazed at the entourage that followed the final three groups inside the ropes, none of which you ever see on TV: television cameras crews, still photographers, news reporters, radio and television commentators (such as the popular David Feherty), a rules official, and even a gun-toting policeman. Watching these final groups with the tightly contested leaderboard in the distance, I felt strongly at that time that a playoff was imminent.

As the crowds were too thick on the final hole to view live, we opted to watch the end of the tournament on the big screen while listening to our radios. After Johnson’s infamous shot on 18, from what we all now have learned was a bunker, it was interesting that the radio announcers picked up on it immediately. One of them commented, “I think Dustin may have grounded his club in what may be deemed as a bunker. If that’s the case, he would be assessed a two-stroke penalty.”

The hundreds of fans around me, who were also wearing earpieces, reacted with horrifying gasps and grumblings. The television announcers did not become aware or comment on this until after Johnson was about to putt for what he thought was the championship. It was a strange feeling to know that the thousands of us watching Johnson were aware well before he and his caddy, of the unbelievable news he was about to receive.

To be honest, it was almost a good walk spoiled after learning of Johnson’s unfortunate and unbelievable demise. As we climbed the shuttle bus back to the parking lot, it was almost as if somebody had died. Nobody spoke, and everybody was listening intently to his or her radios to learn of Johnson’s fate, and to try to comprehend the incomprehensible.

Since the event, Johnson’s incident has been analyzed inside and out, by every possible expert in the field. Most all have come to a similar conclusion – that it was avoidable in many ways and that it was extremely unfortunate. It will undoubtedly go down in history as one on the most bizarre and unfortunate endings of a PGA major.

For me, it was a gut-wrenching ending to an otherwise exceptional day. And I would prefer to remember it as one of the radio announcers described, “the most exciting day of golf this year.”