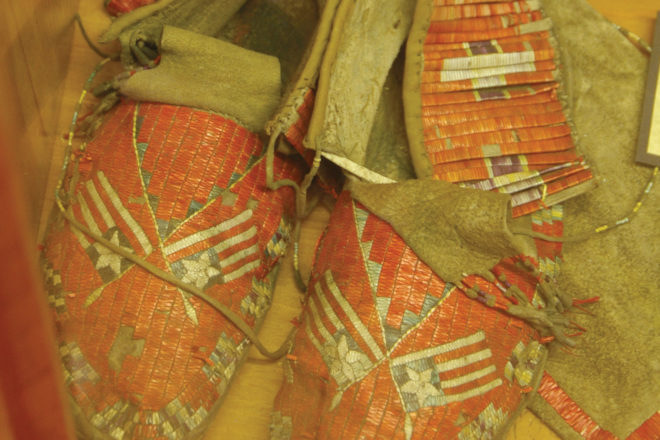 Before Swedes or Norwegians; before Moravians or Belgians. Before Captain Bailey or Increase Claflin; even before French explorers such as Nicolet and Radisson, who began visiting the area in the 17th Century. For hundreds of years before European exploration and settlement in the Great Lakes region of what we now call the United States, indigenous tribes fished the waters and hunted the forests of the land that would eventually become known as Door County, Wisconsin.

Based on archeological records as early as 11,500 years ago, Paleo-Indian people had discovered the Door Peninsula and decided to live in the area due to the availability of essential resources. “There is good reason why the Indians found the Door County peninsula such a congenial place of habitation,” writes H.R. Holand in his 1925 history of the area, Old Peninsula Days. “Hunting was as good as elsewhere in the state, there was an abundance of maple trees for making sugar, and in addition to this they had the rich fishing in the surrounding waters.”

From 10,000 BC on, the land of the peninsula had been continuously occupied by various Native American groups. At least five aboriginal community sites are known to have occupied the immediate vicinity of the present site of the City of Sturgeon Bay, which included the “Cardy” site. That site yielded many artifacts from the Paleo-Indian era, some of which are on display today at the Door County Historical Museum, on Fourth Avenue in downtown Sturgeon Bay.

“Most of the information about Wisconsin Paleo-Indians has come from the studies of fluted points,” pieces of stone crafted by human hands into arrowheads, spearpoints and other tools, says author Carol Mason in her book Introduction to Wisconsin Indians. For many decades, local farmers plowing fields have been known to find arrowheads and other preserved artifacts on their land. The type and location of those artifacts have helped to create a fairly accurate portrait of the lives of these earliest inhabitants of the Door Peninsula. The native peoples of those times were primarily hunters and gatherers, nomads who would obviously be attracted to the abundant food in the area.

The next period in native history is known as the the Early-Middle Woodland/North Bay Culture era,  0 – 400 AD, from 2,000 to 1,600 years ago. This time period saw the transition of Native Americans from nomadic hunter-gatherers to plant cultivators and pottery makers. With those occupations came more community stabilty and also permanent homes and encampments. There are three particular sites in Northern Door – Richter, Mero and Heins Creek – which have yielded significant evidence of permanent Indian villages from this era.

The Oneota Cultural era, beginning 400 years ago, coincides with the start of recorded history of the native peoples in Wisconsin, as European explorers began to arrive and document the area and their contact with native people. The major tribes in the Door County area at that time were the Potawatomi and the Menominee, and also included Ojibwa, Ottawa, Petun, Huron, Ho-Chunk and Sauk tribal settlements. By this time, these people were accomplished hunters and agriculturalists, and became well known for their pottery. Much of the physical evidence from this time period has been unearthed at the Mero site.

The Indian scholar and historian Patty Loew writes in her book Indian Nations of Wisconsin about the similarities between the many populations inhabiting the area at the time: “As could be expected from peoples sharing the same woodland environment, these tribes shared some characteristics. They lived in wigwams made from bent saplings sheathed with bark. They shared a simliar diet. They hunted deer, rabbit and waterfowl; fished for sturgeon, pike, lake trout and catfish; gathered nuts, wild rice, berries, edible plants and shellfish; and planted corn, beans, squash, tobacco and sunflowers.”

By the early 1600s, the Potawatomi had settled on Washington and Rock Islands. In 1634, tribal members met Jean Nicolet and began trading with the French, transporting goods as far as the city of Montreal in eastern Canada. The arrival of the white settlers, however, signaled the beginning of the end of the prominence of native culture on the peninsula, in the state of Wisconsin and across the American territories.

The fur trade, first with French and then English settlers, brought economic and cultural changes that the native peoples of Wisconsin simply could not sustain. As the United States became a fledgling nation in the 18th Century and began its program of Manifest Destiny in the 19th, the usurping of Indian lands began in earnest.

Overpowered by sheer numbers of white settlers, despite valiant uprisings, the native people eventually became a defeated people and through a program of unfulfilled treaties and forced relocation, found themselves displaced on reservations, oftentimes far from their native lands. The 1830 Indian Removal Act, signed by President Andrew Jackson, forced the Potawatomi from Wisconsin to Missouri, Iowa, Kansas and eventually to Oklahoma by 1867.

Maps from as recent as 1820 indicate villages of Ottowa, Ojibwa and Potawatomi along the entire length of the peninsula, all the way up to and including Detroit and Washington Islands. By 1870, however, only a single Potawatomi village is shown on the entire peninsula. The 2000 U.S. Census put the American Indian population in Door County at 0.7 percent of the 28,339 total, fewer than 200 individuals. Today, the heritage of the Native American people of the Door Peninsula, the original inhabitants of the area, is preserved almost exclusively in books, museums and place names such as Potawatomi State Park.