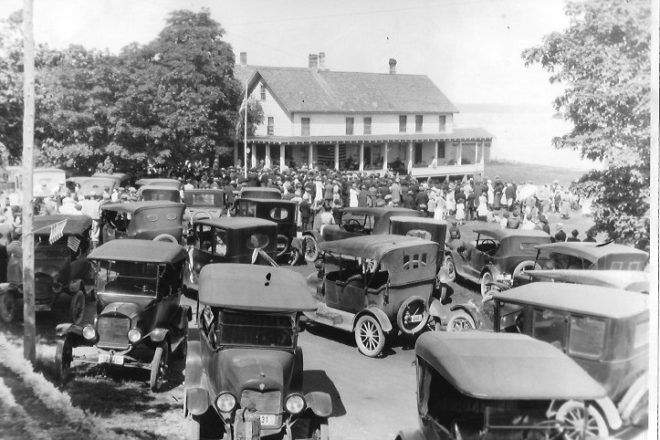 This July 4, 1923, photo of the Panter Hotel came from the family records of Kriss Schorer.

The site that’s now the Florian II Lakeshore Supper Club in Baileys Harbor was first occupied by a stagecoach inn that Carl Hendricks built in 1885. The rooms on the second floor were heated with small, wood-burning stoves, and there was an adjacent stable for horses.

In about 1900, it was sold to Soren Hansen, and there seems to be no record of any other ownership change before 1919, when Charles and Elizabeth Panter purchased what was by then known as the Baileys Harbor Home.

On Dec. 3, 1920, the Advocate reported, “The Sturgeon Bay Chamber of Commerce together with retail dealers and other representatives from the northern towns met at the Panter Hotel in Baileys Harbor. A sumptuous feast was served by landlord Panter.”

Charles Panter died in 1932, and Elizabeth continued to operate the hotel with the help of her son, Cecil.

In April 1936, it was reported that “Henry Seiler put the finishing touches on a new dining room at the hotel with its own entrance from the street, a view of Lake Michigan and its cooling breezes. The food, for which Mrs. Panter has long been praised, will be even better and more tasty, if that is possible. An orchestra has been employed for dinner dancing.”

Bill Cotton bought the Panter Hotel in June 1944 and renamed the bar the Cotton Club, which he advertised as “The Fun Spot of the North,” with special music and free dancing every Saturday night. They also arranged to manage and rent the Maxwelton Braes cottages along with hotel rooms.

In 1949, Cotton sold the hotel to Amandus (Mandy) and Doris Peterson, who renamed it the Peterson Tavern and Hotel. They lived upstairs with their seven children, cats and dogs.

The oldest child, Dan – owner of the Viking in Ellison Bay since 1984 – got his introduction to fish boils at his parents’ hotel. A farmer named Honold was the boil master, but when he failed to show up, Dan and his next-oldest brother, Robert, took over. Dan remembers tending bar at a very young age, washing dishes in the restaurant – and sticking the dirty pans in the oven.

“It was a lively place,” Dan said, “with a pool table and a polka band. There wasn’t a lot in Baileys Harbor then, except for three garages and two grocery stores, but I believe there were about 13 taverns in the township. I’ll never forget the lady in one of the grocery stores, who called me a name I had to look up in the dictionary: obnoxious. I guess I must have touched a magazine or something.”

Robert remembered that he and Dan discovered two sealed-up rooms with lots of old bottles in them under the bar. They got in through a crawl space just big enough for a child to access. An outside door and steps up to the bar had also been sealed. Perhaps it was a speakeasy during Prohibition, as was rumored of another local place?

The boys also remembered roller-skating and seeing movies on a wall in Schram Hall.

“It was a wonderful thing when Orville and Elton Voeks started movies in the Quonset hut,” Dan said.

Their dad always had a Halloween party for children in the village and set off fireworks for them on July 4. They also recalled fishing on Emma Toft’s property (now Toft Point), for which she charged 50 cents, and on LeClaire’s boat. Dan got to steer on the way home, keeping the course by the lighthouse. He also remembers Emma walking her cows up and down the hill every day.

In 1953, the Petersons sold the hotel to Charles Charkowski, who renamed the bar the House of Mr. C. Dan remembered that when Charkowski bought the business, he did a lot to upgrade the hotel and asked Dan to help him haul all the perfectly good furniture to the dump in his Nash. Robert recalled that “after having all the work done over one summer and owing everyone in Baileys Harbor, Charkowski skipped town, and the bank reclaimed the mortgage.”

Florian and Ada Kwaterski bought the hotel in 1956 and transformed the downstairs into the Flo-Ada Club, beginning a four-generation operation that is celebrating its 65th anniversary this year.

The Kwaterskis, their six children, and Ada’s mother, Augusta Walther, who had been the cook at Hotel Carmen in Sturgeon Bay, moved into the rooms above the club. Joe and Jerry Kwaterski, current owners of the Florian II and the Blue Ox, also in Baileys Harbor, were eight then. Joe remembers that he started cleaning bathrooms at age 10, and by 15, Jerry was in charge of grilling steaks on the live charcoal gill in the center of the restaurant.

In 1970, when Florian decided to sell the business, the twins cut short their education at UW-La Crosse to keep it in the family. In August 1972, when the Kwaterskis, the waitstaff and entertainers were asleep upstairs, Joe woke up smelling smoke. The building, only partially insured, burned to the ground. The twins were just 24, but they had years of experience in the business, and they were determined not to end the family legacy. By the next day, they’d put up a sign: “We will be back.”

The new facility, named Florian II Supper Club in honor of their dad, opened in May 1973. With serving hours of 4:30-9 pm every night except Monday from mid-May through October, it has the only “show lounge” north of Green Bay, with musical groups playing on weekends. New this year is the outdoor Har Bar.

“There aren’t too many old family businesses like ours that have been here for 65 years, through four generations,” Joe said. With his wife, Tina; their sons, Brandon and Dylan; and Jerry’s wife, Mindi, all involved, the Florian II can be expected to be around for more decades. “And,” Joe added, “Jerry and I still clean the restaurant ourselves every morning – and I’m still scrubbing the bathrooms!”

Dueling Hotels: The National and the Panter

As old as it was, the Panter Hotel was not the first in Baileys Harbor. That honor went to the National Hotel, built by Carl Hendrick in 1869, making it the first in Door County according to news reports of the day.

Because its owner’s name was nearly identical to that of Carl Hendricks, it was easy to get the history of the two establishments confused, especially because the National changed hands even more often than the Panter did.

The establishments were both popular for social events, and even more so after the National enlarged its ballroom in 1879 to be able to host six sets of cotillions at the same time. (Perhaps its expectations were overly ambitious because it was put up for public auction the same year.)

Prior to becoming a hotel proprietor, Charles Panter had other ventures. A news report dated May 25, 1911, read: “Charles Panter, the hustling Baileys Harbor mail contractor, on Sunday received his stage motor car and the first trip was made to and from the harbor that day, carrying passengers to the funeral of Mrs. Rottman. The car, called the Menominee, carries 14 passengers, their baggage and the mail, and has a 30-h.p. shaft-drive. With this outfit the running time (to Sturgeon Bay) can be cut down to two hours easily, and a half-hour less if necessity so requires. Frank Moeller is now engaged in driving temporarily until Mr. Panter gets used to the difference between the steering wheel and the reins.”