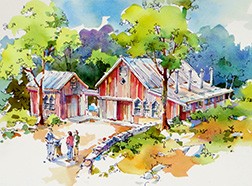 Watercolor rendering of the Forge by Bridget Austin.

The Clearing Folk School in Ellison Bay has been planning and fundraising for four years to build a building for classes in metal arts and crafts. Well, the time is drawing near for planning to turn into reality – groundbreaking for the building is slated for the spring of 2016. Classes in the building should commence later in the year.

The Forge at The Clearing will be home to classes in forging (blacksmithing), metal sculpture, metal casting and other kinds of metal arts. Metals classes are foundational to the “folk school” tradition. The ability to build a metals program will be a big step in The Clearing’s evolution.

The road from an idea to a functioning building can be long and winding, as has been the case with the Forge at The Clearing. It’s not unreasonable to think that this particular road began 70 or 80 years ago, since there’s little doubt that Clearing founder Jens Jensen would have loved for his students in the 1930s and 1940s to forge metal during their time at The Clearing. But many years would pass before the seed of an idea finally germinated, when, in 2009, Clearing supporter Jean Barrett offered to make a generous donation to The Clearing. Jean offered to donate her late husband’s blacksmith tools, equipment and supplies to The Clearing. Her husband, David Nevalainen, had established The Forge at Cedar Ponds, north of Baileys Harbor, about 10 years earlier and had taught classes in forging there, including classes for The Clearing’s Winter Program. Jean’s generous offer was accepted by The Clearing’s Board of Directors. There was a catch, however – accepting the donation meant The Clearing was going to have to build a new building!

The Forge at The Clearing will be located near The Clearing’s Workshop, which was built in 2007 and serves as the home for classes in wood craft (wood carving, wood turning and furniture making), glass craft (stained glass, glass fusing and glass bead making), and paper arts (paper making, paper marbling and book binding) to name a few. The close proximity of the two buildings will facilitate classes that combine two disciplines, for instance, a furniture making class in which the students also forge their own hardware—pulls, hinges, etc. Or a broom making or basket making class in which students also forge their own broom or basket handles. 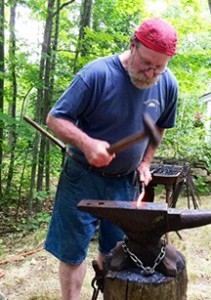 Blacksmith Dan Nauman demonstrates the use of blacksmithing tools at The Clearing.

Fundraising, as it can be and so often is, has been slow but steady for the Forge at The Clearing. About 70 percent of what is needed to build the building has been raised, most of it through donations from individuals. But two local foundations have generously provided grants for the project. Roger Kuhns has been a generous donor of materials. He donated old barn beams and posts from which a porch roof will be built along the west side of the new building and from which a small storage building was framed last year in a Clearing class on timber framing. This storage building will be used to store metal stock for classes in the new building.

Blacksmith Dan Nauman has been a generous and ardent supporter of The Forge at The Clearing. Dan owns Bighorn Forge near Kewaskum, Wisconsin, and got involved in The Clearing’s project early on. He had helped David Nevalainen with his forge outside Baileys Harbor and had helped Jean Barrett inventory David’s tools and equipment after David’s death. Dan has served as The Clearing’s consulting blacksmith during the entire building planning phase. And Dan will certainly be one of the blacksmiths who will teach classes at The Clearing once the new building is up and running. Just recently, Dan spent three days at The Clearing demonstrating forging to crowds as large as 25. His demonstration “projects” were primarily the tools – coal rakes, shovels and tongs – that will be used by the students who will take forging classes at The Clearing. Dan will also build the actual forges (work stations) and side draft chimneys in The Forge at The Clearing when the time comes.

For more information on The Forge at The Clearing, call 920.854.4088, stop by The Clearing’s visitor center at 12171 Garrett Bay Road in Ellison Bay, or visit theclearing.org.