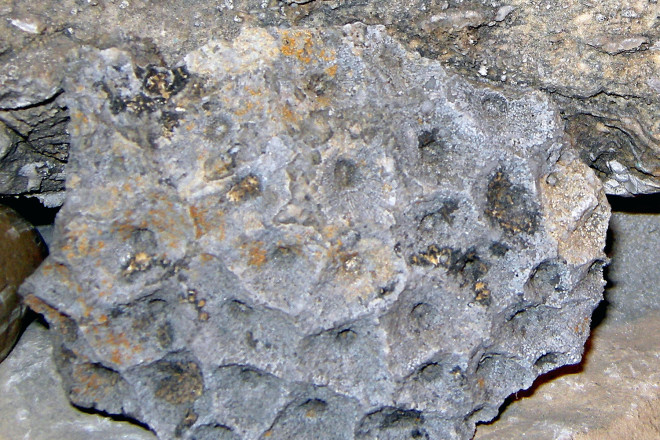 If there was one time when I really got turned onto the mystery and fun of searching for, finding and 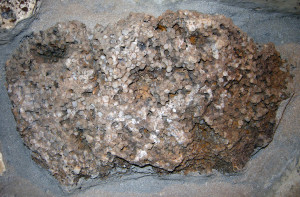 learning about fossils, it was when I was working for the Kewaunee Highway Department during the summer of 1950. A crew was building a new road somewhere north of Luxemburg and the quarry from which I was hauling gravel in a large truck was near Frog Station in northwestern Kewaunee County.

One noon after I had finished my lunch I wandered over to the edge of the quarry and soon realized there were many fossils to be found there. They turned out to be mid-Silurian in age, roughly 425 million years old, and that got me started in a fossil-collecting and studying hobby, which continues to this day. A few years ago I donated at least three-fourths of my large collection to the University of Wisconsin – Oshkosh Geology Department. There many students can view, handle, learn about them and perhaps become motivated to the great joy and excitement of fossil hunting and collecting.

My favorite “museum specimen” of a fossil, now at Oshkosh, was a siphuncle of a cephalopod that was approximately 18 inches long, imbedded within a slab of bedrock limestone. More than one person, upon seeing this excellent specimen, thought it resembled a person’s spine. Two other fascinating and fairly common fossils found in Door County are Hexagonaria (Michigan’s state fossil) and Syringopora, one of the tabulate corals.

One of our best fossil discoveries in the county occurred in October 1976 when Charlotte and I were teaching at the Clearing School at Ellison Bay. With the farmer-owner’s permission, we spent some interesting time examining a few of the many stone fences in northern Door County. By the way, we never ventured onto property, including stone fences, without the owner’s permission. 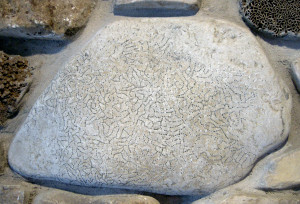 Naturally we came upon literally hundreds of coral fossils, including the abundant honeycomb and chain coral fossils. Included in our finds were a small number of brachiopod fossils. These in a sense are cousins to the clams. The lifeless objects out of the prehistoric past are also bivalves. One major difference is that, unlike pelecypods (pe-LESS-i-pods), each of their two shells is different.

The brachiopod fossils we examined, Pentamerus laevis, are found in several states including Wisconsin, Illinois, Ohio and New York. I have heard more than one person wonder out loud whether these objects, dating back to the mid-Silurian period, were the fossilized tracks of deer. One can, with a little imagination, visualize a cloven hoof, oval in shape and about the same size, considerably like that of a deer.

Experts have identified and recorded several thousand different species of brachiopod fossils, most of which lived in shallow water during the Paleozoic Era. Gradually, as their environment disappeared due to the geological and geographical changes of the earth, pelecypods slowly took their places. Slightly more than 200 species of living brachiopods occupy modern seas today.

Most geologists agree that approximately 450 million years ago the continents were joined into one land mass referred to as “Pangea.” Gradually the land masses split apart, becoming continents. Wisconsin was roughly at the equator where a tropical climate existed, thereby enabling tropical sea life, including many species of corals, to live. This explains why so many of the fossils found here are of tropical nature. They lived and became fossilized at the equator and gradually through plate tectonics, split apart and moved northward to 45 degrees north latitude where we live now. 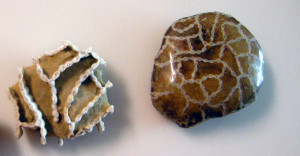 How well I remember an experience with one of my students when I was teaching at Gibraltar School. I told him to ask his father if it would be all right for me to look for fossils on one of their stone fences. Back came a reply the next morning, “Pa sez ya kin have all the fossils ya want, but come and pick ‘em when we’re pickin’ stones in the fields this spring.”

I look back on that treasured moment of reply with more and more respect every time I see a stone fence. My motivation of primarily rural junior high students to the study of geology was more difficult than in an urban setting far from rock-studded fields. The sons and daughters of farmers tended to associate rocks and stones with the strenuous task of clearing the fields. Needless to say, geology did not “turn them on!”

The occurrence of fossils, amidst the ordinary lackluster rocks to be piled onto the mountainous fences, did add a little interest to our study. However there were several repercussions from parents toward our geology course. One remarked during a parent-teacher conference, “My daughter is just no good anymore at picking stones. Ever since you began teaching her about fossils she insists on turning over and over every stone she picks from the field and wastes so much time. She wants to bring home nearly as many as she piles on the fence!” 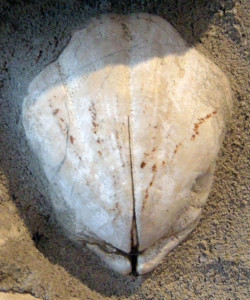 Many of the older pieces of limestone, including those with fossils, making up the mile after mile of stone fences have been etched, cleaned, and worn by the forces of weathering. A weak form of carbonic acid, produced by nature during rainfall, as well as that horrendous substance called acid rain, a devastating byproduct of some industries and various other forms of combustion, are constantly at work, slowly dissolving the rocks. Crystallized, ossified, fossilized, petrified, all will in due time be returned to the earth, their point of origin.

A favorite poem of mine, “Mending Wall” by Robert Frost, says that good fences make good neighbors. Two of my friends, David and Hazel Cox from Beloit, Wisconsin, visited me on September 29, 1966. It was their first trip to Door County and they saw something entirely different in the thousands of feet of expertly made and durable stone fences. My fondest memory of their visit is in the form of a poem which Hazel wrote and left with me.

The saying was that every field

In this new land two crops would yield,

Potatoes would in summer grow

And frost-heaved rocks in winter’s snow.

So every spring with stubborn toil

Before the plow could turn the soil,

The pioneer with calloused hands

And aching back cleared off his lands,

Assisted by his willing brood,

For well they knew the need for food.

Man, beast and fowl must all be fed,

And so the crude and home-made sled,

A clumsy “stone-boat” was brought out

By patient oxen dragged about

Until once more the field was cleared

And higher yet the fences reared.

The work-worn hands have long been stilled.

As monuments through this fair land

To all the sturdy pioneers—

To by-gone ways of by-gone years.