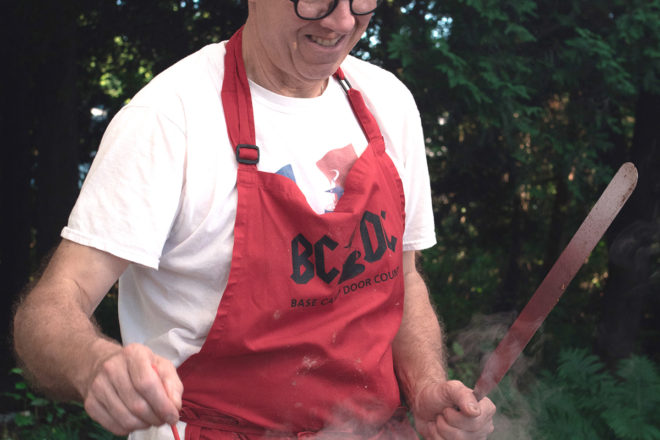 My first real job in Door County (“real” in the sense that taxes were taken out, at least) was at The Singing Bowl Deli in Ephraim, at the corner of Highway 42 and Townline Road. I loved my job at Singing Bowl – the food was delicious, the customers were wonderful (my early crush on Fred Alley was cultivated at the Singing Bowl, when he would come almost every week to see if we had any Miso soup), and I have yet to find a work environment that was as invigorating as that tiny deli.

However, my absolute favorite part of working at the Singing Bowl was coming to work in the morning and hearing Joel Kersebet say hello to me.

“Hello, Melieessa,” Joel would say to me as I came through the kitchen door, and it didn’t really matter what kind of day I was having up to that point – that warm greeting, coupled with the strong French accent, would instantly turn my day around. I’ve never quite figured out why – perhaps it’s because even though he was many miles away from the French province of Brittany, where he grew up and his family still resides, he was unabashedly in love with Door County. Recently I sat down with Kersebet and talked about his early travels, how he found his way to Door County, and how he manages to find French connections in the most unlikely of places.

When Kersebet was still a student in France, he bought a map of the world and tacked it to his bedroom wall.

“I needed to see the world,” he says. “I knew that I couldn’t stay here forever.”

His parents owned a restaurant in Brittany (and did so for 36 years), and it was that early exposure to the restaurant business that prompted his enrollment in cooking school. He graduated with a degree in Restaurant Management, and worked for a year in the Normandy and Paris area for the Ibis hotel/restaurant chain before getting a job in the Restaurant/Bar Purchasing sector of Club Med.

“It was very much a ‘back of the house’ kind of job, and it was great,” Kersebet says. “I got to go to fish markets in Bali at 5 am, got to see fisherman coming back with their catches in the evening…it was a wonderful experience.”

Part of the wonderful experience included extensive travel, and Kersebet went to many places across the world such as Mexico, Spain, and Italy.

It was in Mexico that he met his wife Alicia, and this is where things get a little dizzying.

“Alicia and I were apart for a little bit,” Kersebet says. “I quit Club Med and ended up in the African jungle in Gabon working as ‘camp boss’ on a small oil search expedition camp, while Alicia was teaching English in Japan. Then Club Med called me back to work for them in Colorado and then Greece, the Bahamas and Bali, Indonesia.”

Kersebet says that after traveling for eight years, he and Alicia, married with a young child, Samuel, needed a place to ground themselves.

“Alicia was from Manitowoc – her parents began Ecology Sports in 1972, the business that we now own in Sister Bay. She would take me to Door County often – her parents had a space in the Country Walk Shops for a summer Ecology Sports store. We were both very close to our families, even throughout all of our travels, so it was important for us that we either be in France or Wisconsin.”

Wisconsin won out, and Joel moved to the county in 1995. Alicia worked for her parents, and Joel worked in many of Door County’s restaurants.

“It would seem like a logical choice to work as a cook, seeing I had been to cooking school,” says Kersebet, “but really, I had never been a chef before I came to Door County. I was always in a management position, but I always wanted to have a more ‘hands on experience.’” He worked at the Mission Grille, and the Inn at Kristofer’s, but quickly learned – as many Door County newcomers do – about the seasonal aspect of the peninsula and found a more year-round job at the Piggly Wiggly and then the Singing Bowl deli in Ephraim.

“The Singing Bowl was a wonderful place,” he recalls. “It felt right there; we prepared a lot of delicious, fresh food, and I got to meet many wonderful creative people.”

“We purchased Ecology Sports from Alicia’s parents in 1999 and moved it to its current location at the old Liberty Grove Town Hall on Highway 42 in Sister Bay. I worked at Singing Bowl for a few more years until the shop needed both our full attention.”

While Kersebet always thought he would end up opening a restaurant, he didn’t realize that his future plans included a coffee shop. Base Camp opened in Ecology Sports’ lower level in 2005 as an extension of the shop.

“The space is right for a small casual coffee shop. We keep our menu fresh and simple, with fresh bakery daily and alternative savory treats,” he says. Kersebet also says that because he no longer travels as much as he did a few years ago, he likes to bring the feeling of travel to the coffee shop.

“We feature a travelogue series here that has a lot to do with specific trips or the outdoors,” Joel says, “so that fuels my travel bug!”

The shop, open year-round, also features several rotating art and photography exhibits. Kersebet thanks his staff for making Base Camp the wonderful experience that it has been.

Kersebet visits his family in France regularly, although he says in recent years it has been a little difficult.

“It’s really important to me that my children Sam and Stella build a relationship with their grandparents and that they are aware of their French heritage,” he says.

Even if a trip to France isn’t always a possibility, Kersebet says that he has found ways to sneak a bit of France into his Door County life.

With the help of Mary Kate McCormack, Kerserbet has also started a French class for children, held every other Thursday.

“During the summer we take the children to different interesting places and try to link them with French culture and language,” Joel says. “So far we visited the Door County Bakery, Pipka’s workshop, and the Nature Center at Peninsula State Park. In each place the people have been wonderful to share their knowledge with the kids and we are planning to visit other places, such as the ‘Garden Lady,’ the Savory Spoon Cooking School, and wherever we are welcome!”

For Kersebet, the best part of the peninsula is how closely it resembles his home province of Brittany.

“Door County really does have a European feel, and for me, that feeling is especially obvious in Sister Bay. Sometimes I look at the shoreline and the boats and think that it looks very similar to my village of l’Aber Wrac’h in Brittany.”

He laughs, and motions toward the window at the gloriously sunny Door County afternoon. “Although I have to say that while Brittany is wonderful, it is also stormy and windy most of the time – nothing like this! It’s really amazing how great Door County is.”