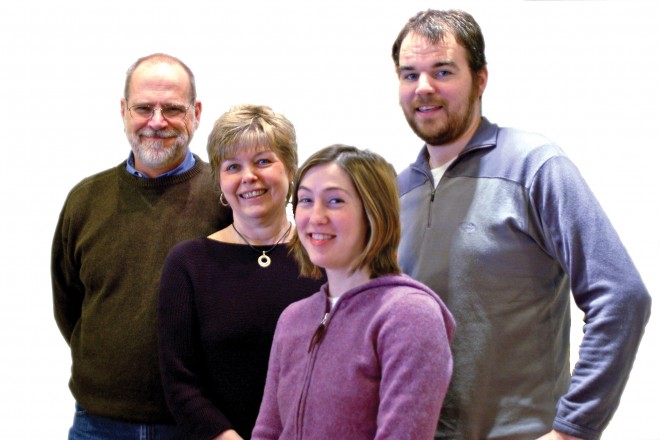 Two generations of the Frykman family formed a partnership in 2005 to make art their life and opened The David Frykman Studio Gallery in Door County’s “gallery town” of Ellison Bay. Theirs is a happily-ever-after success story, for success in Door County pretty much means doing the thing you love to do and making a living doing it. Patriarch David Frykman certainly has done that via his trademark carved Santa figures sold around the world in resin reproductions. This family gallery features David’s originals and one-of-a-kind carvings, sister Faith’s acrylic and oil paintings, and son Lucas and daughter-in-law Heather’s photography. According to David, the family mantra has always been, “‘We live in the best place in the world!’ We try to reflect that in the feeling of our art and the exhibits in our gallery.”

So how did this ever-after success story begin? Once upon a time, Gordy Nelson, founder of Nelson’s Shopping Center in Baileys Harbor, sent his beloved daughter Carole away to Bethel University in St. Paul, Minnesota to become a teacher. There she met the love of her life, David, an art major, and like all smart women born in the county tend to do, Carole brought her spouse back to make a life in beautiful Door. Upon David’s graduation the newlyweds initially stayed near Bethel for three years, living in a one-room schoolhouse with a potting studio in the basement. David sold his ceramic pieces through his sister Faith’s gallery in St. Paul and when not at the potting wheel, played with the “Bo Conrad Spit Band,” a locally “hot” jug-playing group.

Life was good in St. Paul but David and Carole, along with many other artists in the ‘70s, yearning for a more natural and family-oriented life, decided to move to Door County. With the help of Carole’s family, they opened the Potter’s Gallery on Highway 42 and later built what is now the Open Hearth Lodge in Sister Bay. David’s pottery acquired a new look as he began to put faces on the ceramic mugs. Then, the mugs themselves disappeared and what was left were the little fantasy characters of today. “I always had an urge to be a sculptor and this was perhaps a small satisfaction of that,” he says.

David acknowledges his career has been a “gentle evolution” rather than any one big event. His whimsical pottery figures transformed into woodcarvings after he experienced the fun of ice carving. He began carving native white cedar with modified ice-carving tools to give the hard wood the special texture that identifies his work. This new technique came to the attention of Coyne’s Manufacturing Company and many people today know David’s work from the resin reproductions made and distributed by Coyne’s worldwide. In the beginning the people at Coyne’s suggested that David’s Santas would have a life of about three to five years, but he’s kept inventing new series of characters and the journey has lasted fifteen years.

Perhaps the biggest leap, if there was one in David’s career, came from Penny and Dick Scheller, original owners of the Tannenbaum Holiday Shop in Sister Bay, who featured David’s work exclusively. The relationship was reciprocal as the Schellers agreed that “a significant part of our success was due to David’s work. Featuring a local artist who had become recognizable in the collectibles field, with special appearances and signings, really worked.” The Tannenbaum shop, now under new ownership, is still the only outlet David does exclusives for and he is currently at work designing a Santa on a rocking horse for Christmas 2007. Coyne’s continues to distribute his collectibles, but today David is focusing on his one-of-a-kind carvings of white cedar, finished with oil and acrylic paints hand-painted by son Lucas, which are currently exhibited in the Ellison Bay gallery.

Lucas and his wife, photographer Heather Harle Frykman, are the “junior” partners in the gallery. The two met at the University of Wisconsin-Green Bay, fell in love, became engaged at Whitefish Dunes State Park and promptly moved to Arcata, California to live. Heather developed her own aesthetic in photography in this other beautiful part of the world and Lucas, a guitar builder, worked in a marimba shop making bars for the instruments while perfecting his own photographic skills. In 2001 David and Carole began talking about opening a new gallery and Lucas and Heather decided to return to Wisconsin to become business partners in this venture.

In January of 2005, the family purchased a 100-plus year-old building to house their gallery which was originally a grocery store and, more recently, The Berch Tree on Garrett Bay Road. Remodeling began and Heather and Lucas moved into the apartment upstairs to become on-site managers. The gallery officially opened in May 2005 with displays arranged by designer Carole and David’s original carvings. Alongside David’s work, Heather and Lucas’ nature photography offers a rich blend of Door County landscapes, wildlife, flowers, and sunsets, all beautifully matted and framed by Heather.

Three additional artists are represented in the Frykman gallery and when asked how one “gets in,” the answer is “go to Bethel,” as all three did. David’s sister Faith, who helped him back when she owned the gallery in St. Paul, displays her abstract oil paintings; Steve Jorgenson, of Canada, creates pottery and wall sculptures; and Tim Nyberg, of Sturgeon Bay, paints acrylic landscapes. In addition to the art for sale, Heather, when available, does framing and matting on the side.

There’s something unique about this gallery beyond the artwork exhibited, the ambiance of the old building or even Carole’s talent for display. A fellow artist, Claudia Rohling, described the gallery’s spirit in her September 2006 blog by writing, “Each piece seems to have a little bit of built-in happiness, a twinkle to their smiles or a bit of innocence. When I walk through the gallery there is not a single corner that isn’t eye candy.” She is speaking primarily of David’s carved characters but the description captures the feeling of all the pieces and the gallery itself…it’s a family thing!