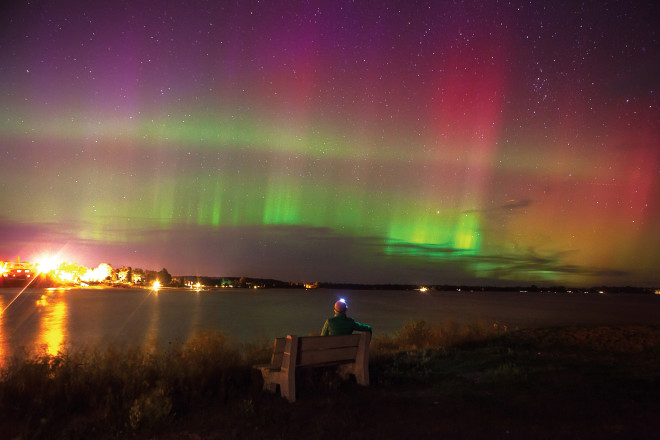 It’s said that long-married spouses sometimes grow to resemble one another and that pets and their owners may share features. Noted fine art nature photographers Heather and Lucas Frykman say their style has converged to the point that occasionally even they can’t tell who took a particular picture. “Often, I’ll take a picture of Heather as I pass a camera to her, so we’ll know that the following shots are hers,” Lucas says.

They met in Green Bay in 2001, when both had part-time jobs as hotel banquet workers. Heather was taking photography classes at the University of Wisconsin – Green Bay and also working at a portrait studio, but taking pictures was still just a hobby for her. It had always been a hobby for Lucas, who had been playing around with his dad’s Nikon for years. (Dad is David Frykman, originally a potter, later a wood carver extraordinaire and, more recently, a painter.)

Heather freelanced as a photographer during a two-year stay in California, but hoped for a full-time career. Back in Door County for a vacation with family in 2004, they began looking at property for a gallery. “When I was growing up,” Lucas says, “my folks let me know I could be anything I wanted to, that it was possible to make a living in art. They had a pottery studio in Sister Bay, and I knew that in Door County, if you have a good product and work hard, you don’t have to be a starving artist.”

“That concept was totally foreign to me,” says Heather. “I grew up in Platteville, an engineering and farming community. I had no idea there was a place like Door County where this kind of life was possible.”

“We owe all the credit to my parents,” Lucas adds. “It was great to have them to guide us, to give us the opportunity to be our own bosses and be artists in Door County.” 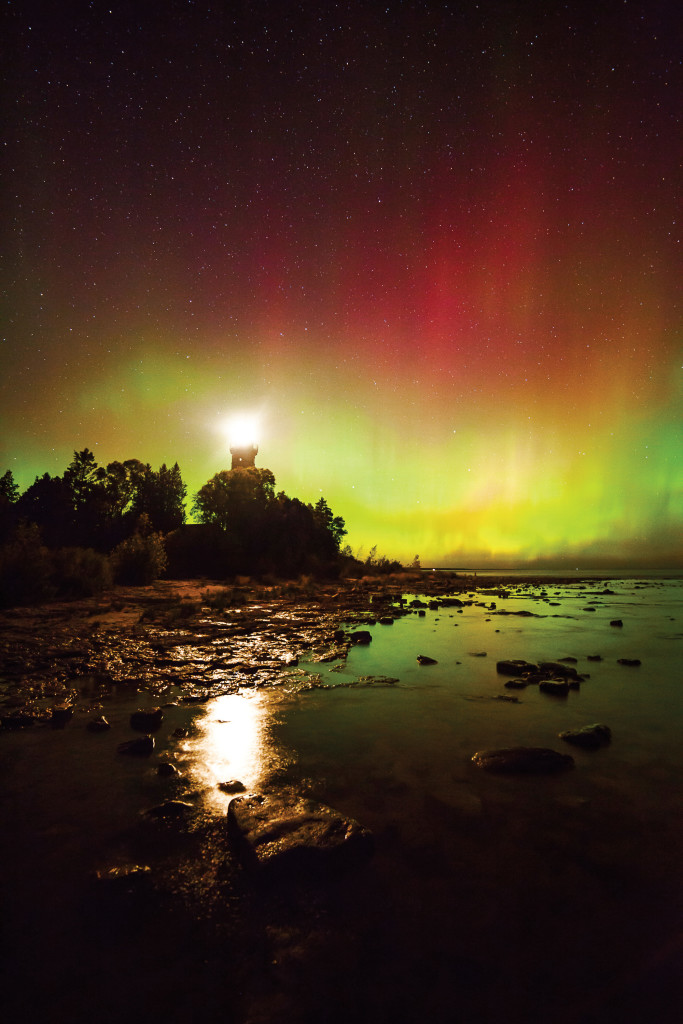 They opened their first gallery at Berch Tree in Ellison Bay in 2005, the year they were married. They still own that location. “That is a real artists’ community,” Lucas says. “We used to get together a few times a year, and we miss those shared experiences, but we outgrew the wall space.”

The wall space in that first gallery was what prompted Lucas to get serious about photography.

“Heather was already an accomplished photographer,” he says. “If I wanted to get any pictures on the walls, I had to become as good as I could. I did a lot of research, looked at lots of good work and practiced a lot. I learned her style quickly, and it became not just a hobby, but a passion.”

“He started driving around with me,” Heather says, “and it wasn’t long before we had to get two good cameras – a pair of 5DMark II Canons with a variety of lenses.”

Heather is quick to point out that Lucas was always stronger in technical skills. “He still leans over my shoulder sometimes to check my camera settings.”

“Yes,” Lucas says, “but she has a real knack for composition. She can walk up to a scene and know immediately what she needs to do. She gets it in the first or second shot, while I may shoot dozens of pictures to get the best one.”

They admit to being “a little competitive” with one another. If one goes out alone now, the other thinks, “Oh, I may be missing some good shots!” 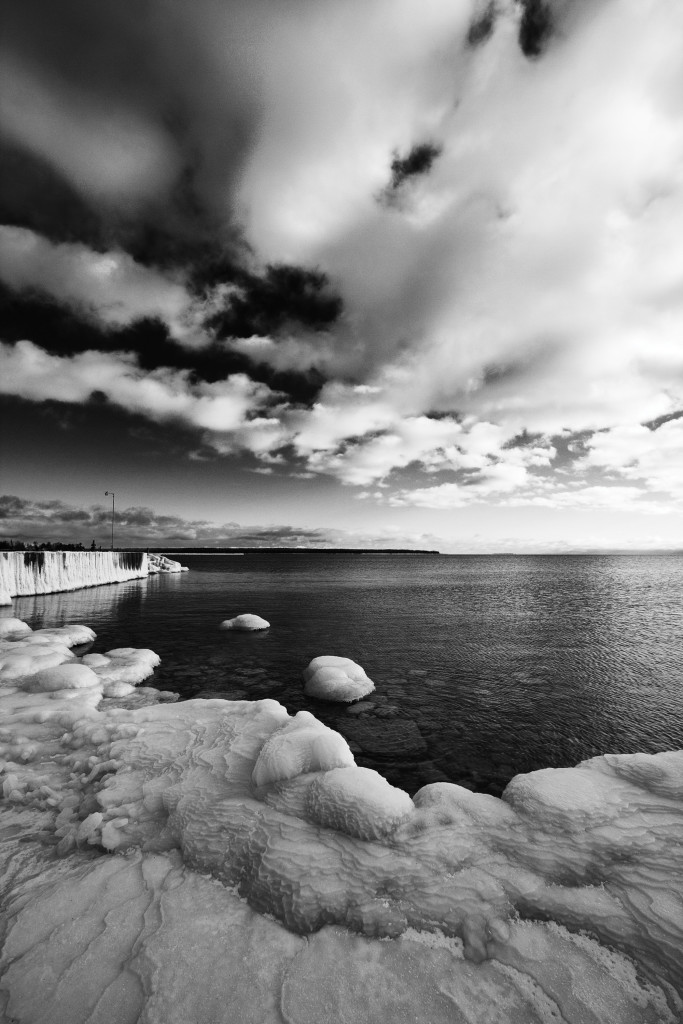 They opened the Frykman Studio Gallery on Bay Shore Drive, just south of downtown Sister Bay, in 2008. Heather learned to mat and frame their work, while Lucas, a skilled woodworker, makes the frames and moldings in his home workshop. Most days in the summer are spent in the gallery talking with customers – with perhaps one day a week in the field. They shoot nearly every day in spring and fall, and even in the winter when snow sticks to the trees. Eventually, they’d like to be able to spend most of their time on photography, with help in other aspects of the business.

Their favorite locations are Peninsula State Park, Cana Island, Cave Point, Rock Island and Washington Island. They’ve also made photo trips to the Smoky Mountains and the north woods, where they canoe and camp. They spent the previous January in Panama, shooting about half the time and absorbing the culture; next, they hope to visit Ecuador.

These days, the pair is best known for their Door County landscapes and incredible night sky photos. Using a wide-angle lens and a 20- to 45-second exposure, they shoot on clear, moonless nights – the moon “washes out” the sky – so they can concentrate on the stars. If conditions are good, they may spend the whole night shooting. “Basically, night photography is the same as day work,” Lucas says. “The settings are different, but we’re still looking for the dramatic view. June and July are prime time, because the Milky Way is highest on the horizon.”

Light is the most important component in their work. “You can always tell another photographer,” Heather says, “by their comments about light – how it plays across the grass, for instance.”

A customer inquired about a photo Heather took a few years ago on the road to Northport.

“It had just stopped raining,” Lucas said, “and for one minute, there was the most incredible light. It never occurred again that summer.”

He also noted, with regret, that a high tree limb that “made the shot” has since been cut.

Many of their night sky shots are now printed on aluminum by Image Wizards in North Carolina. “They catch the eye like nothing else,” Lucas said. “We hear gasps when customers see them. It’s like a first glimpse of high-definition TV on a large screen. Some people even insist that we must be backlighting them somehow.”

Along with leading some workshops at the Peninsula School of Art, Heather and Lucas also offer photo shoots specializing in sunrises, sunsets or night skies. “It’s a very personal experience for just one or two people at a time,” Heather says. “We cover as much ground as we can in two to three hours, chasing the light.” Lucas adds that clients also really like to see how professionals work and that some of their own best photos have come from shoots with clients. 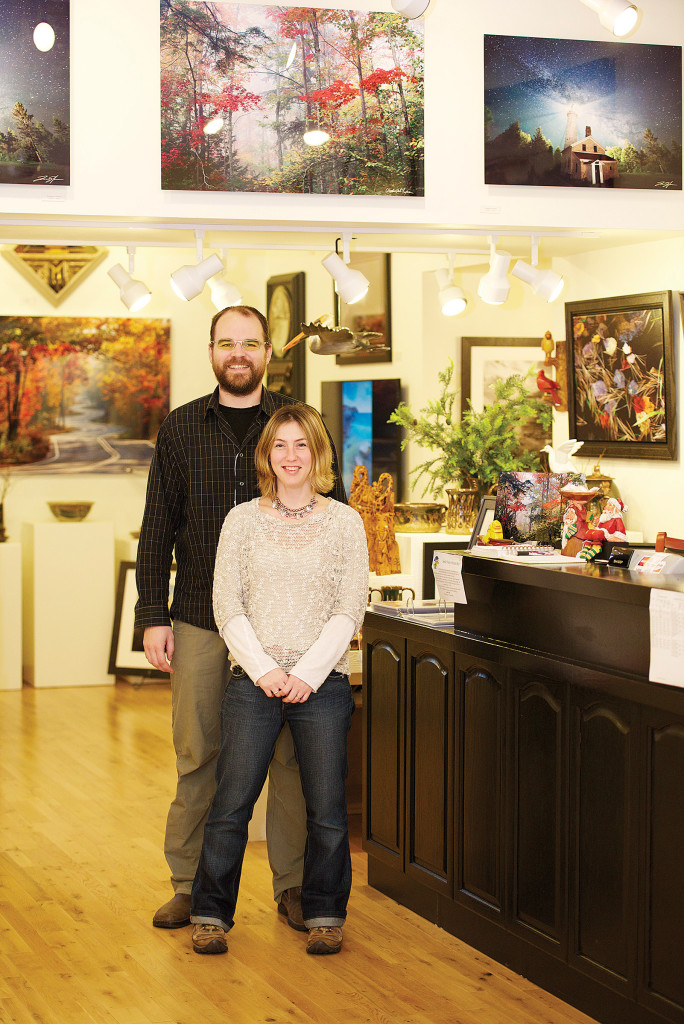