Planned state and village projects could leave the village’s downtown with buried power lines, new street lights, a sandier beach and a new pavilion. If everything goes according to plan, there will be new private developments in the nearby empty parcels, too.

“That’s why we’re very excited to finally see it start to come together,” said Dave Lienau, Sister Bay Village President. “In a year and a half, two years from now, we’ll be walking down the street with big smiles on our faces.”

The changes are split up into four different projects: the beach project, the village’s Bay Shore project, the state’s Highway 42 reconstruction project and the downtown redevelopment project.

Currently, stormwater flows out of a pipe near Waterfront Park’s swimming area. The beach project will move the pipe farther from shore so the runoff is deposited near the end of the swim dock in a “mixing zone,” where the runoff is diluted.

The village will also expand the sandy beach area by removing some structures in Waterfront Park, like the Helms Dock on the south end and the rocks along the shore, and building others, such as a jetty on the park’s south end. That setup will cause sand to build up in the swimming area and create a beach.

“By putting that [jetty] in and removing the other structures, the wave studies show that sand will accumulate at the beach area,” said Dave Lienau, Sister Bay Village President. “When large storms come, rather than pull sand out they’ll deposit sand in.”

The village will also lay larger stormwater pipes and move their paths through the park.

The beach project has to be done before the Bay Shore project, and is scheduled to begin this fall.

The beach isn’t the only thing changing in Waterfront Park. An anonymous donor gave the village money to build a pavilion in Waterfront Park, and the Sister Bay Village Board will settle on a final design this summer.

Village Administrator Robert Kufrin expects the pavilion to be larger than the Peg Egan Performing Arts Center in Egg Harbor, with lighting, sound and screen systems. Construction should start in September.

The village’s Bay Shore project will take place above ground and below. The project will improve pipes underground, and likely bury overhead power lines and install streetlights.

A 2007 study (the Comprehensive Utility Plan Advisory Committee) found Sister Bay’s pipes were too small and too old, and the village needed an upgrade. At the end of the year, the village will replace water, sewer and sanitary pipes from Scandia Road to Gateway Park. This part of the project will start at the end of the year and should be done in April next year.

The pipes are currently located behind the businesses on Highway 42, and will be moved in front of them, underneath the highway, during this project.

The village board approved financing to bury power lines and install decorative streetlights downtown as part of the Bay Shore project during its April 9 meeting, but approval isn’t final yet. When the board hears cost estimates it will make its final decision on the project.

The power lines and streetlight portion of the Bay Shore project should take place in the fall of 2014, at the same time the Department of Transportation will repave the highway.

The Department of Transportation (DOT) is scheduled to repave Highway 42 from Fish Creek to Sister Bay. Construction should start in Sister Bay after Fall Fest in 2014 and be finished by June 1, 2015.

The repaving will start at Country Walk Drive and extend to Scandia Road. During the project, the DOT will lower the hill near the existing visitor center, and widen most downtown sidewalks to six feet.

Kufrin said the Sister Bay Advancement Association and other organizations will design optimal detour routes through the village.

“Everybody is really working hard to try to mitigate the impacts, to try and keep the village open for business for Fall Fest, for Pumpkin Patch and Thanksgiving,” Kufrin said.

On Wednesday, May 29, the village will host a public meeting where the DOT and village will discuss the Bay Shore projects. More details on the detour and closing dates will be presented at the meeting. 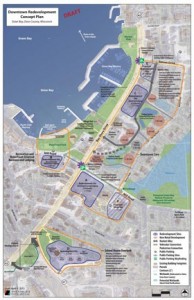 The draft of a downtown redevelopment plan by Vandewalle & Associates. For a bigger draft, click here.

In January, the village hired Vandewalle & Associates, a Madison consulting firm, to write a plan for the future of downtown Sister Bay that would lure developers to the area.

The goal of redevelopment is to increase the village’s tax base, draw the crowd that gathers at Waterfront Park to businesses downtown and to create more opportunities for residents and business owners.

In order to draft the plan, consultants met with village residents and business owners to see what they wanted to see downtown. They came up with a map that shows parcels that could be developed, uses for those parcels, and a potential “Market Alley” road that could connect to Bay Shore Drive and create a walkable business loop.

The first draft of a redevelopment plan was presented at a public meeting on April 16, where residents turned out to comment and ask questions. Residents asked about the feasibility of implementing parts of the development plan, asked for development that would draw young families and also appeal to Sister Bay’s older population, and hoped the village will keep the small town feel that attracted people in the first place.

More details on the draft redevelopment plan are available at the Administration Building on Maple Drive and the village website. A survey asking for responses is posted online at surveymonkey.com/s/SisterBayDowntown and open until Tuesday, April 30.

Kufrin hopes the other projects will encourage downtown business, too.

“The board’s investment with the waterfront and the beach, that’s the real draw,” Kufrin said. “That’s what differentiates the village from the competition.”

These projects have been a lot of work. The sewer and water pipe replacement has been scheduled since 2007, and the Bay Shore Oversight Committee has been working on the Bay Shore project since 2010. The Waterfront Park project has been in the planning stages for nearly that long.

“That’s why we’re very excited to finally see it start to come together,” Lienau said. “In a year and a half, two years from now, we’ll be walking down the street with big smiles on our faces.”