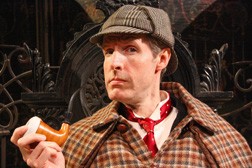 The world famous actor William Gillette, the first actor to write and star in a play featuring Sherlock Holmes, has invited his eclectic cast members to his opulent home for a Christmas dinner party and séance. The festivities are hampered by murder, mayhem and madcap adventures when one of the guests is stabbed to death. Gillette must don his stage persona, sidestep danger and unmask the culprit’s murderous romp.

The Game’s Afoot is the winner of the 2012 Mystery Writers of America Edgar Allen Poe Award for Best Play.

Peninsula Players free public seminars continues Aug. 17 at 2:30 pm with mystery scholar Christopher Chan. The seminar will focus on actor/playwright William Gillette, the first playwright to adapt Sherlock Holmes to the stage and who portrayed Holmes in more than 1,300 performances.

Peninsula Players performs Tuesdays through Saturdays at 8 pm and Sundays at 7:30 pm, with a 4 pm matinee on Sept. 1. Discount tickets are available for groups of 15 or more. Tickets range from $34 to $40. For tickets, call 920.868.3287 or visit peninsulaplayers.com.