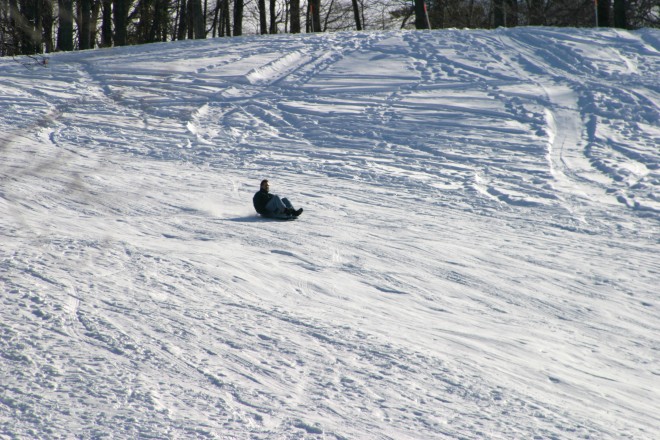 Hill 17 is the most popular sledding hill in Northern Door County.

Hill 17 on the Peninsula State Park course offers golfers a gorgeous treetop view to tee off from. As one drives into the park from the Ephraim entrance, the golf course presents itself immediately to the right, but to the left there’s nothing but a forest of trees. Shortly thereafter, driving to the golf course parking lot, an opening on the left reveals the famous Hill 17 – green, tall (for Door County) and majestic. Versatile, as well.

Come first snowfall, golfers find themselves chased away by little kids head to toe in winter garb, hoisting sleds behind their pillowy masses.

As a local kid I remember meeting other families at the hill with a toboggan and two orange plastic sleds with steering ropes. Layers of warm snow-resistant clothing were velcroed to my little sister and me. Moon boots lined with plastic grocery bags were supposed to keep our feet dry. Other children, equally wrapped in padded gear, brought discs while others had inner-tubes. Moms carried thermoses of hot chocolate or hot apple cider and cameras. Dads carried the sleds and us kids when our legs got too tired to climb back up to the top

Little kids think Hill 17 is a mountain. It seemed to take forever to work those little legs all the way to the starting point. Once at the top, however, we’d scurry to set ourselves up in the perfect positions, doubling up on sleds with feet hooked under someone else’s elbows or whatever seemed temporarily secure. Just when someone shouted, “Wait!?I’m not ready!” it was too late and the shove sent the frigid pile-up of snowsuits down the long, wide-open hill. Eyelids peeled backward. Cheeks burned from the chilly wind. Stomachs flew up to the throat and fluttered. Everyone screamed, “Aaagh!” A few bumps, a wee bit of air, another bump, and then everyone tumbled out of the sled, rolling barrel-style the rest of the way. Every once in a while a kid on a disk would actually make it down into the trees with pride.

As a young adult, I remember the evening a friend of mine got the crazy idea to take a surfboard down Hill 17. Just a little wax job and two cars full of friends could all jump in on this new winter sport. I think there were about seven of us in on this hair-brained excursion. First of all, it didn’t take nearly as long to climb up to the top as I had remembered from childhood, but it was still a good glute workout.?Not all of us could fit on the board, but we tried. We eventually managed to painfully pile about four bodies Twister-style onto this California ride.?We could have used a Saint Bernard to pull us, or a snowmobile for that matter.?It was the slowest, most excruciatingly dull creep down a hill I’ve ever been duped into – the board stuck. Meanwhile, out of sheer stubbornness, the heavier people on top of me continued to hope we’d suddenly fly, while my arms proceeded to lose all circulation. Not a worthy sacrifice, but it’s a memory and it had to happen on Hill 17.

Come April, active kids cling to their sleds, hoping they can get one last snow day. Meanwhile golfers polish their pitching wedges, watching the morning news, hoping for the earliest excuse to get back on the course.