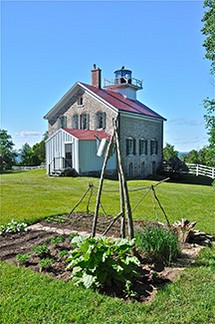 Door County’s first lighthouse, Pottawatomie Lighthouse, has been dubbed “the grandfather of Door County lighthouses,” and for good reason: it has spent the past 179 years protecting the passage between Rock Island to the south and St. Martin Island to the north.

Its beginnings lie in a time of prosperity on many fronts, the most important being the thriving trade between Green Bay (then one of just two population centers in the state) and the cities of the eastern Great Lakes, which dramatically increased with the completion of the Erie Canal in 1825, according to information on the Door County Maritime Museum’s website.

In response, dozens of Detroit merchants and ship owners petitioned Congress in 1834 to build a lighthouse on Rock Island. Congress responded by approving the request and setting aside money for construction in 1836 of a 30-foot-tall stone tower, which included an 11-foot diameter lantern deck on top of the tower and an octagonal iron lantern containing 11 oil lamps and 11 14-inch reflectors.

A stone dwelling was built separate from the tower, and Lighthouse Authorities accepted the new lighthouse in 1837. The first keeper of the lighthouse was David E. Corbin, a War of 1812 veteran.

Two decades after the Pottawatomie Lighthouse and the stone dwelling were built, both were razed due to moisture damage as a direct result of the wrong mortar being used. In the lighthouse’s place, the Lighthouse Board Crew constructed the present day 33’ x 31’ structure with an eight-foot square wooden tower. It was topped with a nine-sided lantern that held a fixed white light visible 14 nautical miles in clear weather.

Lighthouse keepers manned it through the 1940s when it was taken over by the U.S. Coast Guard.

In the 1980s, the station was automated with a battery-powered beacon and in 1986 the batteries were replaced by solar panels. Three years later, Coast Guardsmen erected the present steel tower and moved the beacon to it.

In 1979, it was placed on the National Register of Historic Places and in the early-2000s, the Friends of Rock Island restored the lighthouse (with help from the Wisconsin Bureau of Parks and grants through the Wisconsin Department of Natural Resources) to resemble its appearance in 1910.

Today tours of the lighthouse often call for an entire day of planning, as there is a one-mile walk to the lighthouse from the ferry dock. Free guided tours are offered daily Memorial Day weekend through Columbus Day weekend.