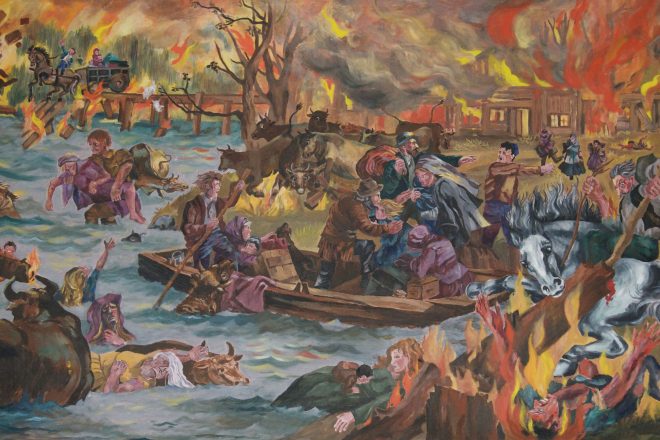 Courtesy of the Peshtigo Fire Museum.

The Peshtigo Fire was the deadliest fire in U.S. history, claiming an estimated 1,800 to 2,500 lives while destroying millions of acres of land across northeast Wisconsin and the Upper Peninsula.

Fires that began Oct. 8, 1871, devastated the landscape on both sides of the bay of Green Bay – both Peshtigo and the surrounding area to the west, and a large part of the Belgian settlement area in Door, Brown and Kewaunee counties to the east. The better-known Great Chicago Fire also began Oct. 8, 1871, and it overshadowed the devastation in Wisconsin.

Belgian immigrants settled the area south of Sturgeon Bay in the 1850s, buying land for $1.25 an acre. When they arrived, the area had to be clear-cut by hand before farmers could use the land. To clear the slash, many small fires were burning all across Southern Door and beyond, which may have contributed to the Great Fire of 1871.

Southern Door’s distinctive brick buildings are a direct result of the fire. Survivors who lost their homes to the flames were determined to rebuild with stronger materials in the event of a second catastrophe.

On Sept. 24, 2021, Rep. Mike Gallagher commemorated the anniversary of the Peshtigo Fire by entering a statement of recognition into the Congressional Record, the document that reflects the official proceedings of Congress.

“In the face of this unprecedented destruction, the people of Peshtigo and the surrounding communities came together to rebuild and restore. Today, Peshtigo is a vibrant community with schools, parks, wineries and museums, all held together by the grit and character of the Peshtigo people that has defined the city for generations,” he wrote.