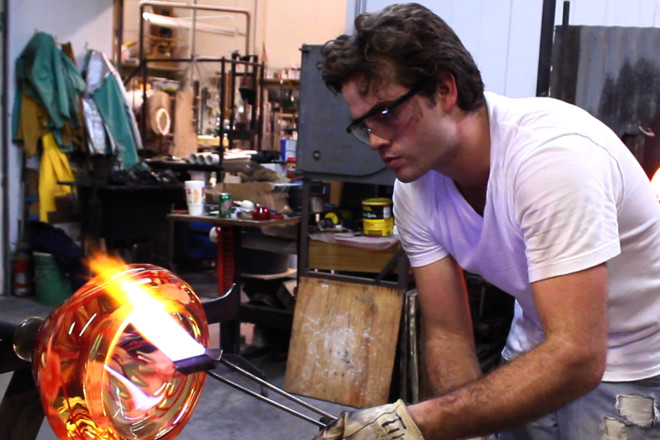 Two of artist Keith Clayton’s biggest passions are glass and music, and from Sept. 11 – 13, the owner of K. Allen Gallery in Sister Bay will fuse those passions to benefit memory loss patients in Northern Door.

“The Great Glass Escape,” an all-glass event of exhibitions, demonstrations, artist lectures, food and music, will launch “Mind Music,” a fundraiser that will bring musicians and other music programs to Scandia Village – Good Samaritan Society for the benefit of individuals with Alzheimer’s and dementia.

It is a cause that has become close to Clayton’s heart, as he has witnessed the realities of neurological diseases on clients and family. It wasn’t until he heard about the benefit music therapy has on memory-loss patients that his path became clear. 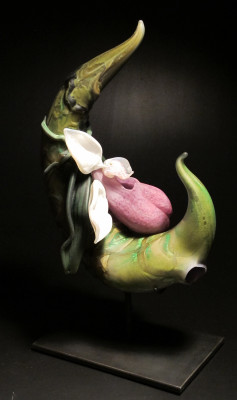 Glass piece by Joe Ivacic, one of The Great Glass Escape’s featured artists.

“I’ve just heard these great stories of people who can’t even speak anymore, but with music they stand up and start singing,” Clayton said. “Can’t even speak, but they can sing.”

He approached Scandia Village in Sister Bay with his idea earlier this summer and with their approval, hit the ground running, putting together a lineup of five glass artists to conduct free glass blowing demos over three days.

Patrick Knapp, activities director at Scandia Village’s Care Center, explained the funds raised would provide money to bring in professional musicians to enhance the center’s current musical offerings, which include sing-a-longs, volunteer musicians, and the Music & Memory Program (which provides memory-loss patients with an iPod Shuffle preloaded with music from their past).

“We’re hoping to utilize some of those amazing musicians who come up for our festivals and things like that who might not have the time always, but maybe if we had an incentive for them that could get them to play here for people who would really love it and appreciate it,” Knapp explained.

“What Keith is trying to do is feed into all of this research that’s telling us that people might even be unresponsive, have Alzheimer’s or dementia, but they still respond to music and especially when we have live musicians in our facility,” Knapp added. “…People are just like encyclopedias for music; they may have short-term or long-term memory loss but they still remember all the lyrics to every song from when they were younger. It’s absolutely amazing.” 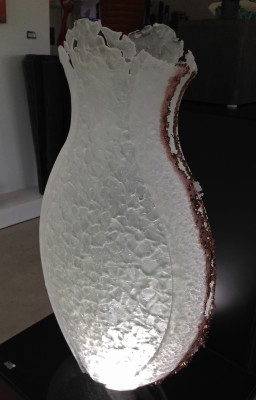 “White Petals III,” by Keith Clayton will be raffled off during The Great Glass Escape, Sept. 11-13, to benefit the Mind Music fundraiser at Scandia Village-Good Samaritan Society.

As part of the fundraiser, Clayton will sell raffle tickets for a chance to win White Petals III, the third in a series of large glass pieces Clayton created. Raffle tickets are $25 each.

“I have these giant chunks of glass based on ice shoves,” Clayton said of White Petals III. “This is also a tulip form; it’s the only form that I’ve done that has a feminine look to it. Most of my work is pretty masculine. That combination of the ice and tulips is because they’re really the first sign of spring, so the ice shoves come in the spring and the tulips come, so there’s that thawing. It becomes more and more important up here annually and I really look forward to that time.”

Although the event is free, Clayton will accept donations for “Mind Music” throughout the weekend. But as Knapp points out, the benefits of the fundraiser have already begun.

“We’re pretty excited,” Knapp said. “I just talked to people at the Meadows [apartment homes] and they are getting a busload of people together from the facility to go to the event. We’ve got flyers up all over so people are getting pretty jazzed about it.

“It’s pretty amazing for somebody to show up out of the blue and say they’re going to try to do something wonderful for you. We’re pretty lucky.”