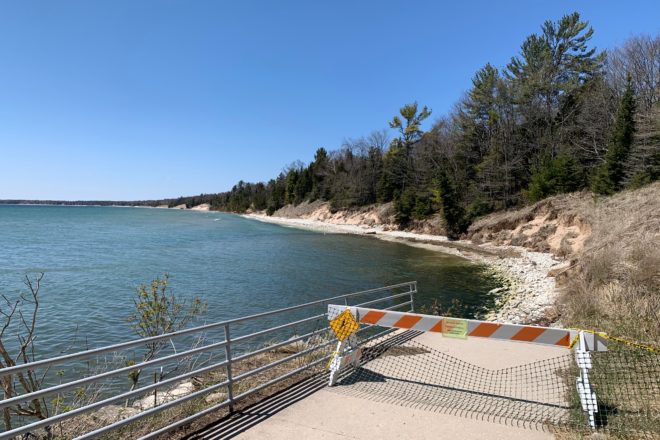 For Bo and Mindy Ellis, the rising waters of Lake Michigan are much more than a curiosity.

Their home on the south edge of Whitefish Bay Creek is within 20 feet of the water and about eight feet above it. In another year or two, or after one bad storm, their house might slip into the lake.

As the water has risen, winds have delivered increasingly powerful Lake Michigan waves to the shore in front of their home, undermining the boulders that were put in place in the 1980s and washing away the sand that paints the shore of Whitefish Bay, south of Whitefish Dunes State Park.

“When the water came up over the last year and a half, it really started to put us at great risk,” Bo Ellis said.

Lake Michigan water levels are nine inches above the level of a year ago, and two inches higher than a month ago, according to the May 8 report from the U.S. Army Corps of Engineers (ACOE). The ACOE is projecting the water will rise another two to three inches by June.

In mid-May, Ellis contracted with Lily Bay Sand and Gravel to install a new stone revetment in an effort to protect his home by absorbing the energy of the incoming water.

Contractors up and down the peninsula have a long list of work this spring shoring up piers, protecting exposed structures and installing riprap along the Lake Michigan and Green Bay shorelines in hopes of preventing further shoreline erosion.

Mary Grace Quinlan estimates that 95 percent of the people who own homes north of Whitefish Bay Creek have installed revetments.

“Our beach has completely changed,” said Quinlan, whose family has owned property in the area for 70 years.

The cost of such protective measures runs $250 to $300 per linear foot of shoreline, said Roger Miller of Miller Engineers & Scientists, a Sheboygan-based firm that performs shoreline work in Michigan and Wisconsin. Miller worked through previous high-water periods during the mid-1970s, late 1980s and mid-1990s, but he’s seen more protection measures taken recently than ever before.

“We’ve seen more hardening of the shoreline in Wisconsin than in all of the previous high-water periods put together,” Miller said.

Private-property owners aren’t the only ones grappling with the rapidly changing or disappearing shoreline. Municipalities up and down the peninsula are going to great lengths to shore up marinas, save beaches and protect public buildings.

In Baileys Harbor, storms undermined the jetty at Anclam Beach, washing away a floating pier and 60 feet of parkland at the end of the jetty, and destroying the public walkway the town created just six years ago. The town has contracted with Death’s Door Marine to install a new, higher breakwall surrounding the structure at a cost of $150,000.

Last fall’s Thanksgiving-week storms devastated Sunset Park and Otumba Beach in Sturgeon Bay. The city is working with Baudhuin Surveying & Engineering to finalize a plan to repair and protect the beach at Otumba Park, and to install a new stepped revetment to prevent further erosion at Sunset Park. The revetment will double as a public seating area along the shore. City Administrator Josh VanLieshout said he expects those projects to cost about $650,000.

The Village of Ephraim may have the most visible water issues to fight. The village has placed sandbags around the base of its old Village Hall to protect against the high water that washes in during extreme storm events. It has done the same at the highly exposed Hardy Gallery at Anderson Dock.

“Even when the water is just a little high, you get a lot of wave action and splashing at Anderson Dock,” said Village Administrator Brent Bristol. “When that happens, we’ve had the floor of the gallery get wet.”

Bristol doesn’t expect the standing water level to get to a point that it would flow over the shoreline and Highway 42 in Ephraim, but he said the sandbags have been placed as a preventive measure because it’s not a step that can be taken on short notice.

Door county communities can be dramatically impacted by seiches, in which wind sends the water in a bay or lake swishing slowly back and forth, similar to how it would flow from side to side in a bathtub.

“If you have a seiche, it can come up in a matter of minutes,” he said. “The sandbags give a little peace of mind for us, especially at the Village Hall.”

On the south end of the village, the Wisconsin Department of Transportation installed several hundred feet of stone riprap to protect a portion of the highway that was completed last year. Stones and other debris were washed onto the road in last fall’s storm, and officials feared the highway would be undermined if protective measures weren’t taken.

And in Fish Creek, the Marina Committee has raised finger piers and installed preformed concrete blocks on the main public dock to keep waves from washing people off the dock this summer.

“Short of spending a lot of money to reengineer the whole waterfront, we figured this was a sensible short-term fix,” said David Harris, chair of the Marina Committee.

Harris said a rise of another foot would flood the marina parking lot, but not the adjacent Clark Park. But the launch ramps would become difficult to use.

“If the water continues to rise, that will be an issue the commission and town will have to deal with and decide if we want to spend the money to engineer a bigger solution,” he said.