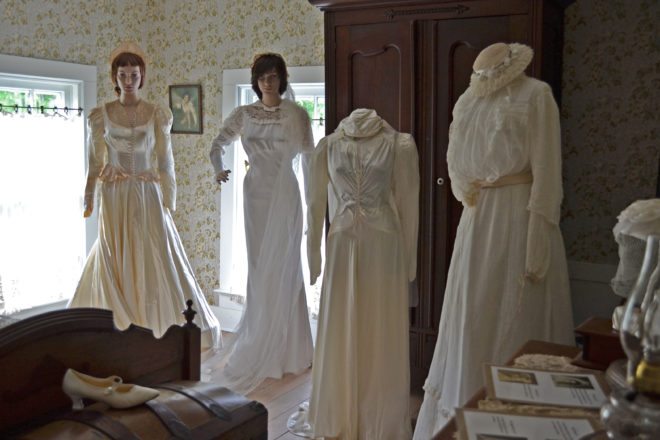 Wedding dresses from 1860 until the late 1950s are on display as part of Gibraltar Historical Association’s 2016 “Victorian Weddings” exhibit. Photos by Alyssa Skiba.

The Alexander Noble House in Fish Creek is ushering in its season with something old, something new, a few things borrowed and a few things blue as it celebrates wedding gowns, traditions and customs through its returning exhibit, “Victorian Weddings.”

Like last year’s “A House In Mourning” Victorian funeral display, “Victorian Weddings” has transformed the Alexander Noble House into a historic walk-through of the early traditions that led to today’s celebrations. 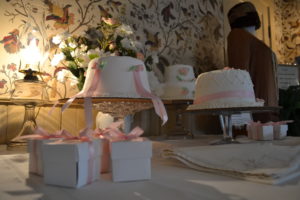 Docents will lead guests through a house in the planning stages of a wedding according to Victorian customs, beginning with the most important: naming the day. Young women marrying in May faced a great deal of misfortune (“Marry in May and rue the day” as the old proverb goes) but those who married in June, the month named after the Roman goddess of marriage, or September were guaranteed a prosperous and happy life.

The day also played a factor in the success of one’s marriage, with the most superstitious brides following an old but popular rhyme:

Marry on Monday for health

Wednesday the best day of all

Friday for losses, and

Saturday for no luck at all.

(The Sabbath day, as the Alexander Noble House display says, “was out of the question.”)

Rhymes seemed to dictate many parts of Victorian-era weddings, as the old but still popular “Something Old, Something New,” goes, which dictated what a bride should wear, from whom it should come from, and what wearing it would guarantee (the rhyme’s oft-left out final line “And a sixpence in the shoe,” guaranteed wealth and prosperity).

The museum has more than a dozen dresses on display, from the oldest – a German Bavarian dress from the 1850s, complete with bonnet, silk tapestry and an intricate choker – to its most modern, a simple white number from 1959-60. Guests will notice the shifting tradition of gown design, from puffy sleeves and bottoms to deep purple gowns with a bustle and shorter dresses for the dancing days of the 1920s.

Laurie Buske, coordinator for Gibraltar Historical Society, has spent the better part of this spring setting up the display, steaming the gowns and dressing the mannequins (which the museum now has more of, thanks to a recent Sargent family grant).

“I’m a pretty lucky person because I get to put this all together,” Buske laughs. “How many people get to dress mannequins for a day job? …I went to school to be a decorator so fabric is my thing!” 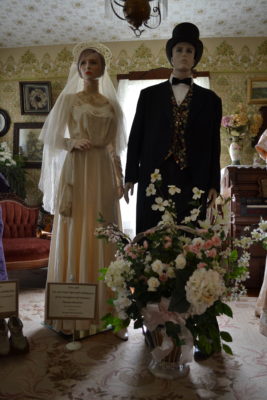 Buske points out that, much like today, wedding gown designs were dictated by the day’s fashions and, not surprisingly, “what the queen did.” After the Roaring ‘20s, the growth of the wedding industry really took off when brides no longer had to rely on their own hands, or those of tailors, to make their attire.

“That started to happen when the department stores had dresses you could go buy,” Buske explained. “That’s when it became more of an industry and a business and a big moneymaker. Truly the ‘30s and ‘40s.”

The wedding industry stalled during World War II when Americans became more conscious of supporting the war effort (“They saved all the white for parachutes,” Buske said. “And some people even made their dresses either out of lace curtains or upholstery fabric because of the war going on”) but it was revived shortly after.

The exhibit also includes a first-floor honeymoon room complete with a Victorian traveling suit and old photos from Fish Creek’s days as a port for steamboats, which people boarded to set off on honeymoons. Guests will also learn about the significance of shoes – “the symbol of domestic authority” from a woman’s father to her new husband – and an old courtship practice of Colonial America known as “bundling.”

What is bundling? A chance for the engaged couple to be in bed together, but with their clothes on.

The museum is located at 4167 Main Street in Fish Creek. For more information or for group reservations, call 920.868.2091 or email [email protected]