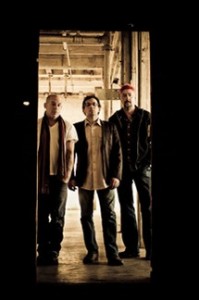 (Left to right) Jerry Joseph and The Jackmormons – Steve Drizos and JR Ruppel – make their Door County debut at The Hitching Post on Sept. 25.

Since its inception, Steel Bridge Songfest has welcomed Jerry Joseph to participate in the yearly music festival that attracts dozens of talented musicians, including Jackson Browne. Longtime friends of local musician pat mAcdonald and the late Billy Triplett, the raspy-voiced, soulful musician has always wanted to attend and participate in the festival but his touring schedule never allowed it.

“I looked at the [touring] schedule and we have a day between Chicago and Milwaukee and I was like, ‘I really want to go up to Door County,’” says Joseph, who’s based in Portland, from San Diego, has lived all over the states, and tours throughout the world – from Israel to Southeast Asia, England to Costa Rica.

“I’ve got a lot of connections,” says Joseph, who will perform with his three-piece band, The Jackmormons, on Sept. 25 at The Hitching Post beginning at 10 pm. The show will kick off at 8 pm with performances from Wally Ingram, Chris Aaron, Lisa Bethke, mAcdonald, and melaniejane.

Joseph met mAcdonald, currently the creative director at The Holiday Music Motel in Sturgeon Bay, in the late ‘90s in Germany. “We both had the same label in Berlin,” he explains, adding, “I’m just a fan of his music.”

He also met Triplett in the ‘90s, who became a good friend of Joseph. “He was a great guy, we’re playing a memorial show for him out in Portland,” he says. Triplett, a Grammy-nominated record producer and recording engineer, passed away Aug. 11 at The Holiday Music Motel.

Though Joseph does a lot of solo work and is about to release a solo, acoustic record (his 30th album to date), he also enjoys performing with JR Ruppel and Steve Drizos – who make up The Jackmormons. “We are a super loud rock band,” says Joseph, who does much of the songwriting. “Some of my lyrics are beautiful, happy, angry, much of my stuff tends to be dark, but so am I.”

Joseph can hardly remember a time when music was not a part of his life. “I started playing a guitar when I was little, I mean little,” he says. “I was in a band by the age of 12.” His musical influences ranged from The Monkees to Black Sabbath to Bob Marley.

In the 1980s, Joseph came to prominence with the band Little Women, a reggae rock jam band. For over a decade they played throughout the Rocky Mountain club scene.

In ’95, Joseph was meant to play “one gig” with Ruppel and Drizos, but “they ended up being my band fort he last twenty-some years,” he recalls.