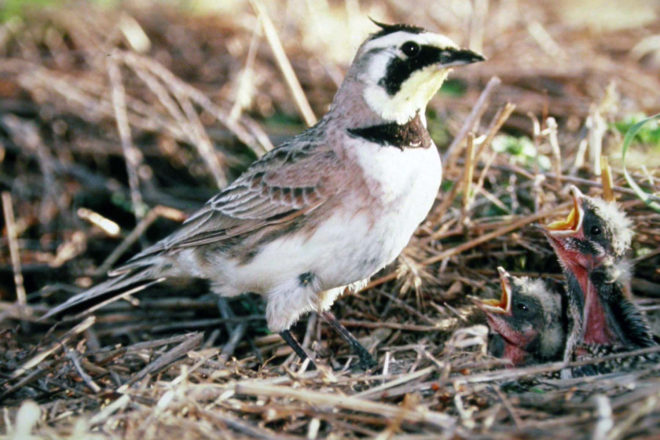 The black feathers on the head of this female horned lark show how it got its name. The pale-yellow throat is surrounded by black. Two young in the nest are begging for food. Submitted.

I keep looking along the country roadsides, hoping to see my first horned lark of the spring. A friend living in Sturgeon Bay said he saw his first one on February 28. That is a very late first date; however, the heavy snow cover of this winter is making it difficult for most birds and animals to find food.

My late husband, Roy, and I knew where to look for these first-of-the-spring migrants, but the roads I travel now do not have any bare shoulders. This is the area where the horned larks seek weed seeds to sustain them until the agricultural fields become free of snow or at least have patches of open ground.

It wouldn’t surprise me if more people are familiar with the name skylark than the name horned lark. Larks are primarily Old World birds. About two-thirds of the world’s 75 species nest in northern Africa. The one species that we have is the horned lark, and it is circumboreal, in that it also nests in northern European countries.

Those who study birds feel that the spectacular flight song of the skylark, primarily of Europe, ranks as one of wildlife’s most beautiful natural sounds. Shelley, the great poet, described it as the “blithe spirit,” and Europeans settling in other parts of the world have made many attempts to introduce the skylark to their new homes. Some populations – including those of New Zealand, the Hawaiian Islands and even Vancouver Island off British Columbia – have become quite successful.

Roy’s first encounter with the horned lark was while he was in the Army in eastern Texas on a mission with the atomic cannon. As he and the other soldiers waited for instructions, he realized they were surrounded by what appeared to be hundreds of larks. Fortunately, he had binoculars and could see their field marks and enjoyed watching them at close range.

These birds require open areas where the plants are low-growing; these include beaches, cultivated fields, dry ditches, arctic tundra, open prairie and abandoned airfields, which is where Roy first saw them. The horned lark’s scientific genus, Eremophila (air-eh-MOF-i-la), means “loving solitude” and reflects very appropriately the habitats that this six-to-seven-inch bird needs.

The early spring food that the horned larks seek on road edges is seeds of quack grass, foxtail and ragweed. Snow plows scrape and continually disturb this area next to the pavement, and here the biggest crops of the pesky, hay-fever-causing ragweed grow.

The unassuming horned larks sport narrow, black patches under their eyes and on their upper breasts. Tiny tufts of black feathers – which, when erect on the upper sides of their heads – give them their horned lark name. A close look will reveal a light yellow color on their throats, foreheads and eye lines. Brown backs and light undersides offer them excellent camouflage. Females tend to be slightly smaller than males, and their coloring is more subdued.

An outstanding field mark is easy to see when they fly. Most of the tail is black, with white outer tail feathers – less distinct than the dark-eyed junco’s tail. These hardy birds, when disturbed from their roadside dining by a passing car, will fly to the fields in low, choppy, hesitant undulations as though they are not sure where they want to land. At times they soar upward with surprisingly strong wing strokes.

Rarely if ever would one be seen perched in a tree or even on a low shrub. An examination of their toes and claws shows how well they are adapted to this existence on the ground. The claw on the horned lark’s hind toe is unusually long and quite straight: poorly suited to clasping branches, but perfect for walking on the ground. They do more walking than hopping, the way sparrows move.

Perhaps you wonder where the male sings if it does not perch in a tree. Similar to birds of the plains, such as bobolinks, much of their singing is done while in flight. The lark’s delicate, twittery, tinkling song – like miniature bells far in the distance – bubbles with the unbound essence of the open spaces. These aerial advertisers repeat their songs as many as two dozen times, remaining in the air for as long as three minutes while doing so.

The horned lark is a philopatric species, meaning that it is faithful to its birthplace, returning there after every migration. They don’t travel southward in fall any farther than they have to. Depending on the severity of the winter, many migrate to southern Wisconsin and often have begun their northward journey by late January or early February.

The high count of horned larks in our state’s Christmas bird counts came during the very mild winter of 2000, when 10,764 were reported. In the past 10 years, we have recorded seeing them in our vicinity, mostly in southern Door County, throughout the winter in six seasons. In two of the years, they were not seen until mid-February, and during 2014 – the last polar-vortex, deep-snow year – they didn’t show up until March.

It is quite common for horned larks to be incubating eggs in nests on the ground while scattered snow patches remain, and because of unseasonably late spring snow storms, their first broods suffer a high mortality rate. Fortunately, they have up to three broods a year, with the most successful occurring in early May before too many predators are on the prowl.

We rejoice over the arrival of the hearty horned larks that can eke out an existence along barren roadsides while proving that spring is just around the corner. And we’re all for that!

Most people have been conditioned to associate the arrival of the first robin with the end of winter. For me, it will always be the horned lark: the little champion of the early spring.