“I remember visiting for the holidays,” Mary Uhl said. “When he walked in the door, everything went click – his smoking jacket, slippers, dinner served immediately. He carved the meat and served everyone. As a child I was intimidated: I knew I had to behave!”

Leonard Apfelbach remembers their grandfather, too: “Ferdinand Hotz was a tall, thin man with erect posture who spoke perfect educated English with a slight German accent and was always well dressed with suit, tie and hat even when outdoors in the woods or on a boat.”

Apfelbach researched the life of his grandfather to write The Ferdinand Hotz Legacy: A Door County Family History, sponsored by the Newport Wilderness Society. Newport State Park is directly linked to Hotz as he originally owned 1,472 of the 2,400 acres that make up the park.

While many people in Door County are aware of Hotz’s connection with the park, few realize his extensive real estate holdings throughout Northern Door, and fewer yet know that he has made a place for himself in the art world as a photographer. His photographs documenting scenes in Fish Creek, Peninsula State Park, Juddville, Baileys Harbor, Cana Island, Europe Bay and Europe Lake are on exhibit in the Link Gallery in the Door Community Auditorium through September 23.

Ferdinand Hotz assembled albums of prints (most 14 x 24 inches) for each of his four children; one of them passed to Apfelbach through his mother Alice, and another to Uhl through her mother Margaret.

Uhl donated her book of about 60 prints to the Gibraltar Historical Association; for many years the album was stored nearly forgotten under a bed in the Noble House in Fish Creek. This year the organization sponsored an exhibit of the historic prints. Pam Jardine volunteered to write grants and serve as curator for the project. A long-time Fish Creek area summer resident and retired assistant director of the University of Pennsylvania Museum of Archeology and Anthropology, she is now a consulting scholar for that university. She researched the prints, had them framed, and mounted the show, first in the old Fish Creek Town Hall for Heritage Week (June 6 – 12), and then the present exhibit in the Link Gallery.

The photos are works of art representative of Pictorialism (an aesthetic movement in the history of photography dating from 1890 to 1920); but they also document life in Northern Door during the early part of the 20th century. And more particularly, they show Hotz’s impact on the community as a landowner.

The biography of Ferdinand Hotz is the stuff of American mythology, a self-made man who takes advantage of opportunities offered in this country. Sponsored by his uncle, ophthalmologist Ferdinand Carl Hotz, young Ferdinand in 1884 at age 16 immigrated to Chicago from his native Germany. After traveling the country working different jobs, he returned to Chicago and learned the jewelry trade, eventually opening his own business in 1892. He was skilled in creating designs, selecting gems, and securing business contacts.

One of his most famous gems was the 42-carat flawless blue Maximilian Diamond.

Hotz married Clothilde Schmidt, fathered four children, and amassed a fortune, a portion of which he invested in Door County real estate. He first visited Door County in 1905 and then annually from 1911 when he also started to acquire property, both land and shoreline, in and around Fish Creek, Juddville, Ellison Bay, Cana Island, Mud Lake, Clark Lake, and Egg Harbor.

In 1915 he began assembling his best-known tract of land in the Europe Lake-Newport area, property that was later sold below market price by his heirs to the Wisconsin Department of Natural Resources for Newport State Park. Because Hotz chose not to develop this land, his children and grandchildren wanted it preserved for posterity in its natural state.

In addition, he and his family donated land on the Northern Door peninsula for town parks and other public purposes. 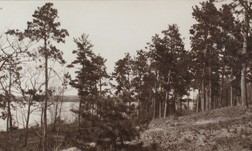 “Germans enjoy forests, hiking, mountain climbing and traditionally are attuned to nature,” Apfelbach wrote in his family history. “Owning his own land must have made him [Hotz] feel like an equal to the owner of the castle overlooking his home on Fischgasse in Wertheim.”

Because of the poor economy in Northern Door at the time, Apfelbach added, Hotz felt that he “was performing charitable acts by purchasing homesteader’s land in order to help them in their desperate situations.”

He built a rustic lodge on a rise above Europe Lake, a structure that was dismantled and moved to a Sturgeon Bay site after the land became a state park. Hikers may enter the trail marked by a stone gate on Europe Bay Road and pass the site of the home.

And just as Apfelbach’s history records the Hotz legacy, so do the photographs on exhibit at the Link. Those familiar with local geography will recognize sites that have been obscured by the passage of time. One of the photos shows a family bathhouse on the shore in Fish Creek; it still exists, located between the present homes of physician Leonard Apfelbach (filled with paintings by his family members) and of artist Mary Uhl (whose property includes an art gallery). Many of Hotz’s descendents are artists, musicians, and physicians.

The Pictorialist photographers, like Ferdinand Hotz, intentionally softened their images, Pam Jardine explained. Much like impressionist painters, they were more interested in visually recording their personal expression than creating realistic documentation.

The goal of many photographers in this movement was to achieve what Jardine calls “a pictorialist blur,” a dreamy effect created by a soft focus. Each photograph was unique as they were often printed on colored paper and subtly tinted with watercolors.

Jardine took representative photos to experts who felt that a gelatin silver developing process had been used. “The curator of the Philadelphia Museum of art thought they were lovely,” she said, and felt they should be framed capturing as much of the border paper as possible, making the pieces larger but more unusual.

The photographs on exhibit “are originals and shouldn’t be on display too long,” she added, as they “are very fragile and light sensitive.” She hopes that photographs can be made of the originals for preservation purposes, and that eventually the other photos can be framed as well. A few of them are diptychs and triptychs.

Apfelbach has a collection of Hotz’s negatives that he has sent to the State Historical Society to be developed, perhaps leading to additional photos in the collection.

Ferdinand Hotz left a legacy at once artistic, historical, and personal. Uhl remembers sneaking into his billiards room as a child, watching him and his friends in a dim, smoke-filled space; she remembers him dressed as a German Santa but in a brown coat; and Apfelbach recalls that the grandchildren were to be seen but not heard.

Those were different times, and they may be enjoyed through September 23 in the Link Gallery of the Door Community Auditorium in Fish Creek.