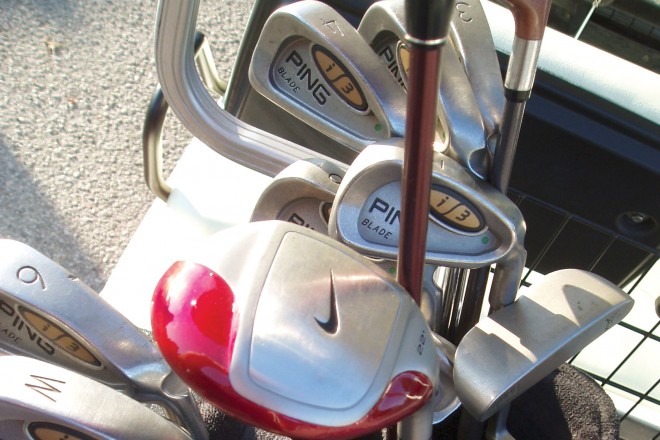 About ten years ago I can remember walking up a fairway at Peninsula State Park Golf Course with friends on our approach to the green. We were looking at similar distances to the green for our second shot – between 170 and 200 yards. With a slight groan, I pulled out my four iron, which had helped poison an earlier shot of mine. One of my friends quietly reached into his bag and pulled out his brand new utility club, which he hadn’t mentioned buying, thinking he could take his shot, quickly put the club back in his bag, and the whole thing would go unnoticed. However, the club was more conspicuous than he’d thought and in an instant the affable ridicule began. We were not about to let him get away with using this club without some sarcastic commentary.

What a difference ten years makes. Even though utility and hybrid clubs are a relatively recent addition to the pantheon of golf clubs, their explosion in popularity can no longer be denied. Designed to be easier to hit with than traditional long irons, the terms “utility clubs” and “hybrid clubs” are generally used interchangeably. They denote a category of clubs that combine elements of both woods and irons into their design. The proliferation of these hybrids has been a blessing to thousands of golfers who lack the strength, speed or skill to play their long irons well.

Most golfers struggle with their long irons for a couple of reasons. The long irons have a relatively small sweet spot compared to other irons and, more importantly, many golfers don’t generate enough club head speed to get an adequate launch angle for the longer irons. Hybrid clubs are designed to hit the ball higher and land it softer than their iron counterparts. The clubs achieve this by using the low profile and weighting of fairway woods to help get the ball in the air, while avoiding the digging or divot-taking nature of irons. Many hybrids resemble the look of traditional fairway woods and seem to be the choice for the average-to-high handicappers, while others are more iron-like, and are preferred by better players.

Regardless of the hybrid style, these clubs are viewed to be one of the most versatile clubs you can have in your bag. Off the tee, these clubs are great for long par threes and short par four tee shots when you must carry a bunker or water hazard. Because of the high ball-flight, the ball will come down on a steeper angle making it easier to stop on the green. Hybrids are also great for long approach shots to the greens on par fives and long par fours. Because of their great distance control and accuracy, these hybrids will build your confidence.

Another popular use for hybrids is hitting from the rough. Long irons tend to get caught up in the rough causing them to twist easily and produce poorly hit shots from the rough. The bigger size and mass of the hybrids over regular irons make it easier for the club to drive through the rough while keeping the face square. These clubs also work great for bump and run shots around the green. They help to eliminate the chance for error by getting the ball rolling on the ground as quickly as possible. Because the shafts are shorter you can play these shots almost like a putt without choking down on the shaft to gain control. This eliminates the chance of a skull, chunk, or a decelerating wedge shot.

Professionals on the PGA tour and the media have certainly helped fuel the hybrid fire. Last year at the British Open, Todd Hamilton, a rookie on the PGA tour, beat Ernie Els and Phil Mickelson to win the major using Sonartec’s MD Transition model hybrid off the tee, as well as around the green in his short game. He was only one of 46 players at The Open carrying hybrids in their bags. What’s more surprising is that the club’s manufacturer was not paying Hamilton. Sonartec’s only staff player at the time was Nick Price, and the company had about 125 tour players using its clubs without compensation in 2004.

Hybrids have quickly become the hottest category in the golf industry. According to Golf Datatech, a Kissimmee, Florida-based retail market research firm, hybrids account for 20 percent of all wood sales at golf shops. The growing percentage of hybrid sales has made it impossible for big golf companies to disregard. Most of the larger club manufacturers are now offering hybrids. Companies like Titleist, King Cobra, Callaway, Nike, and TaylorMade have had great success selling their hybrid lines. Holdout company Ping, no longer able to ignore the growing piece of pie, is launching their first ever wood-like G5 series hybrid in September.

So what type of swing do you make with a hybrid club? The answer most professionals give is: the same swing you make with your long irons. That means playing the ball forward in your stance and using your normal grip, stance and posture. Take the club back low and make a smooth, comfortable turn. On the downswing, don’t think of hitting down sharply on the ball. You want to make more of a sweeping-type swing, hitting down on the ball very slightly. You should take only a tiny divot, if any divot at all. Remember to swing easy, at about 80 percent of your effort for a normal shot. The club will do the rest, even off the tightest fairway lies.

There’s no doubt about it; hybrids are here to stay. While technology has made it easier for golfers to hit the ball farther, hybrid technology will keep golfers interested in the game for more years. Considering the prolific acceptance of these clubs by tour professionals, amateurs should never feel bad about having hybrids in their bags.