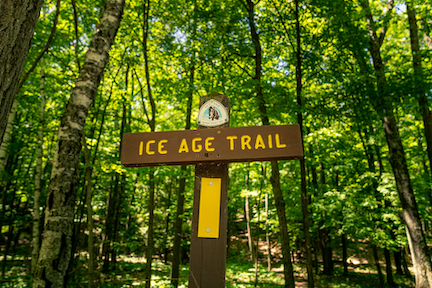 When I first heard it, the term “National Scenic Trail” conjured up images of vast mountain ranges and sweeping sunsets. Defined as a continuous trail that is 100 miles or longer and that provides “outstanding recreational opportunity,” the distinction of being named a National Scenic Trail belongs to only 11 trails in the country, one of the most well known being the Appalachian Trail.

But there’s also one in our own backyard. Beginning at the Wisconsin-Minnesota border and carving its way north across Wisconsin, the Ice Age Trail culminates in a 2.8-mile trail within Potawatomi State Park in Sturgeon Bay, where its eastern terminus is marked by a plaque next to the park’s observation tower on Shoreline Road.

The Ice Age Trail winds for 1,200 miles along the edge of a massive glacier that covered much of North America a mere 15,000 years ago — a blink of an eye in geological terms. As the glacier receded, it sculpted the landscape into formations that we still enjoy today, such as Wisconsin’s lakes, river valleys and rolling hills.

Lysianne Unruh is the communications coordinator for the Ice Age Trail Alliance (IATA), an organization committed to preserving, maintaining and acquiring property along the trail.

“People who hike the Ice Age Trail are able to immerse themselves in what is essentially a living museum as they hike the ridge of an esker [a ridge of postglacial gravel deposited by melting glaciers] or as they reach out to feel the moss-covered surface of an enormous erratic [material moved by glacial forces from one location to another],” Unruh said.

Although the beauty of the Potawatomi segment of the Ice Age Trail speaks for itself, knowing its geological importance furthered my appreciation for the trail as I hiked it. Walking through forests in absolute silence while stepping over rocks and roots on the unpaved path, I could imagine quiet, lumbering woolly mammoths and prowling saber-toothed tigers roaming across the same landscape thousands of years ago.

Indeed, I felt as if I was traversing a “living museum” — the culmination of 1,200 miles of history and immense beauty, nearly hidden in Door County’s backyard.

Difficulty: Ranges from easy to moderate

Announced by a rustic, hand-painted sign located at the top of what used to be a ski hill, the trail winds through forests of mainly hemlock, sugar maple and birch trees. The path is often uneven courtesy of roots and rocks, and it rolls over various elevation changes, but it is generally easy walking.

Keep an eye out for trees marked with yellow squares of paint that indicate the way. The most dramatic elevation change is aided by wooden stairs that gradually lift hikers from the forested path onto soaring cliffs — a stunning example of the Niagara Escarpment, capped by a sparkling view of Sturgeon Bay.

The trail continues through sections above the water that are lined with daisies before dipping into the forest again and looping back through the trees toward Shoreline Road.