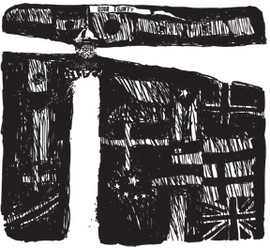 This is the first in a series of articles about the immigrant population that lives in the shadows of Door County.

There’s not much of a Hispanic population in Door County, at least that’s what the census tells us.

The 2010 census recorded 671 Hispanic or Latino people living in Door County, about 2.5 percent of the population. To anyone who has set foot on a dairy farm, peeked into a restaurant kitchen, or taken a look into a classroom, however, it’s clear the census figures are missing a lot of heads.

On the surface they seem to go about their lives like anybody else, holding down long-term jobs as valued members of the workforce, packing up their kids for the school bus, and filling shopping carts at local grocery stores.

But for these residents woven into the fabric of our communities, the bottom could drop out at any moment, says Luca Fagundes, a Door County attorney who has carved out an unexpected niche in Northeastern Wisconsin as an expert in immigration law.

“In many ways they can live just like the rest of us,” Fagundes says. “But there’s always the possibility that they could get caught, deported, and their family split apart.”

But the overwhelmed Immigration and Customs Enforcement (I.C.E.) agency focuses much of its resources on the most dangerous illegal immigrants involved with drug running and weapons. If they did decide to crack down on the peninsula, Fagundes says it could be disastrous for the local economy.

“Kewaunee farms would be stuck,” he says. “All the big farms down there rely on undocumented workers. It would bring them to a standstill. Or the restaurants in Door County. They’re never going to find enough Americans to fill all those jobs.”

Door County businesses have increasingly come to rely on immigrant labor, be it foreign students on short-term J-1 visas or undocumented immigrants. When the state department altered guidelines for J-1 visas earlier this year, cutting back on their work season, many business owners were left scrambling. Few want to imagine what would happen if they suddenly lost the much larger undocumented workforce.

Many employers know that their employees are in the United States illegally, but the desperation to find enough dedicated workers is enough to make them look the other way and accept documentation on face value.

Door County District Attorney Ray Pelrine said that the illegal immigrant workforce is now built into the structure of a lot of businesses here, especially farms, where 40 percent of Wisconsin agricultural employees are immigrants, 50 percent of whom are suspected of being here illegally.

“I could probably name you three or four different employers who routinely employ them – orchard, farm, and restaurant work,” he says. “It’s got to become a portion of their bottom line. Pull that out and you would hurt a lot of businesses.”

Illegal immigrants pay social security and withholding taxes, but aren’t eligible to collect the associated benefits or unemployment benefits. A study produced by the state comptroller of Texas, where it’s estimated that undocumented immigrants make up as much as 8 percent of the total workforce, revealed that those workers generated $1.58 billion in state revenues and used $1.16 billion in state services.

These immigrants are willing to work long hours as well, often at lower wages. As parents struggle to get their children interested in the family farm and families have fewer children to supply workers, immigrant employees have become indispensable – legal or not.

A 2009 study from the University of Wisconsin – Madison estimated that the state’s immigrant dairy farm workers put in an average of 57 hours per week and took just 4.8 days off each month.

Employers are required to obtain proof that workers are here legally, either as citizens with a Social Security number or foreign workers with a valid visa.

Illegal immigrants get around this by simply claiming another person’s identity, actually taking on a different name, or making up a Social Security number. (One business owner who asked not to be identified told me that he only found out he had employed an illegal immigrant for several years when that worker returned to Mexico and called him, finally telling him his real name.)

“It’s not uncommon at all for young men and women here illegally to have false papers,” Pelrine says. “And there are cases where people may truly have thought they were getting something lawful.”

With those flimsy documents in hand, Fagundes says it’s easy to get a job.

“You provide a Social Security number that you make up, or buy one somewhere,” he says. “There really has never been much enforcement against employers who employ undocumented immigrants, aside from the occasional crackdown on a big corporate manufacturer or agricultural business.”

Those illegal immigrants that do get caught are rarely reported by employers or neighbors, and local law enforcement is not charged with enforcing immigration law. Pelrine says that if they come across a suspected illegal immigrant his office will alert I.C.E. through an anonymous toll-free line. It’s then up to the agency to place a 48-hour hold on the subject or not.

Fagundes guesses that the tip line probably gets thousands of calls every day.

“They can’t possibly respond to many of them, let alone all of them,” he says.

If they do, they have 48 hours to come pick up the offender from the time the local enforcement officials are done with him.

Pelrine says such actions are much more common today than before 9/11.

“Now they deport people on minor traffic violations,” he says. “Fifteen years ago, nobody seemed to get deported for anything. You’d have people commit fairly serious crimes that they wouldn’t bother to deport.”

Part of that is a result of enhanced post-9/11 security, but part is sheer numbers. In 1987 there were an estimated 2.5 million illegal immigrants in the United States. Today there are over 11 million.

Most who end up in deportation proceedings are caught because of minor driving offenses, often a result of their inability to obtain identification.

“You can’t get a license, so at some point you get pulled over for speeding and you’re cited for driving without a license or a DUI,” Fagundes says.

Delchambre says immigrant workers are stuck in limbo, unable to pursue citizenship but needing to work and support their families.

“It’s a shame,” she says. “They’re not all angels, but they’re hard working. Maybe 5 out of 100 drive and get into trouble. The majority of them want an honest life here. They break the law simply because they have to drive to work each day.”

That’s where Fagundes found a hole in the system that he was uniquely prepared to fill.

When the 33-year-old Fagundes opened his law office in Sturgeon Bay in January of 2011, he didn’t plan on doing immigration work.

“I thought I’d start a small general practice,” he said. “I hoped that after six months or a year I would get a call from some firm that noticed me and would take me on.”

But soon after he re-settled in Door County after earning his law degree from the University of Wisconsin – Madison, he ran into an old friend, one he met when they both worked at a Northern Door County restaurant years before.

“He asked me if I could look into getting him a work visa, because he wanted to stay here,” Fagundes said.

He didn’t know much about visas or immigration law, but he did have a friend in Chicago who had opened an immigration practice. That friend told him where to start, and it wasn’t long before Fagundes found himself buried in the contradictions of U.S. immigration policy.

Despite his crash course on the topic he couldn’t get his friend a visa.

“Thank you for taking the time,” his friend told him. “I have a lot of friends who have been going to Chicago and Milwaukee to find attorneys, and now I’m going to send them to you.”

Fagundes found himself fascinated by the work, the absurdity of the system, and the stories of the people caught in its web.

“In the end there wasn’t much I could do for this guy, but the work interested me on a very basic level,” he said. “It had a spot in my heart, because that’s the way I came here.”

Fagundes’s mother was five months pregnant with him when his parents moved from Brazil to Florida for his father’s job. He was born into United States citizenship, but just a few months later the factory where his father worked closed down and the family headed back to Brazil. Ten years later they were back, this time with his parents holding work visas, his father as a radiation oncologist and his mother as a child psychiatrist.

Though inspired, Fagundes didn’t think he could practice immigration law in Door County, but his Chicago friend gave him some simple advice.

“Find a Catholic church that has a Spanish service,” his friend told him. “You will get work. People go to the church when they need help.”

He found such a church in Green Bay and sat in on round-table meetings to hear stories and learn about the problems that people living in the United States illegally were encountering. He found that his Spanish language skills were as important as his legal skills.

“It was crucial,” he says. “I wouldn’t have close to my workload if I didn’t speak Spanish. Probably 70 percent of my workload is immigration-related, and 95 percent of those clients don’t even speak conversational English.”

Many of his clients have only a sixth grade education. Communicating immigration law through a translator is complicated at best. Because he speaks Spanish – Portuguese is his first language – Fagundes earns his clients’ trust.

Soon he was getting five or six phone calls a week as word spread through the tightly knit Hispanic community.

“I did a good job for a couple of people and the phone just started ringing,” he says.

He described one client who works in a Northern Door restaurant who has been here for almost a decade, then he got cited for drunk driving. He was fingerprinted, and within a couple of hours I.C.E. placed a hold on him due to a previous deportation from several years prior.

The client was picked up within a day, but before picking him up I.C.E. went to his residence to search for other undocumented immigrants.

“When they arrived at his house they said they would come back for his wife in two days, but they didn’t,” he says.

“Because it creates a massive mess for the system. They had two kids who were born here and are U.S. citizens. If they deport both parents, the kids could become wards of the state,” Fagundes explains.

Often such couples aren’t officially married. Since there’s no way to obtain a legal ID, there’s no way to verify that the information they’re giving authorities is true, even their name. Sometimes they don’t know birthdates, children’s birthdates, or even the date of their wedding, Fagundes says.

“What ends up happening is that often the fathers will get deported and the mothers won’t,” he says. “The whole thing is insane.”

And for each person that gets deported another person is there to replace him or her. The carousel keeps going around. Often the deportee is back in the area within months – if not weeks.

Attorney Luca Fagundes will give a presentation about immigration at the Unitarian Universalist Fellowship in Ephraim July 15, 10 – 11:30 am. To listen to a podcast of his presentation from last year, visit http://uufdc.org/category/podcasts/.