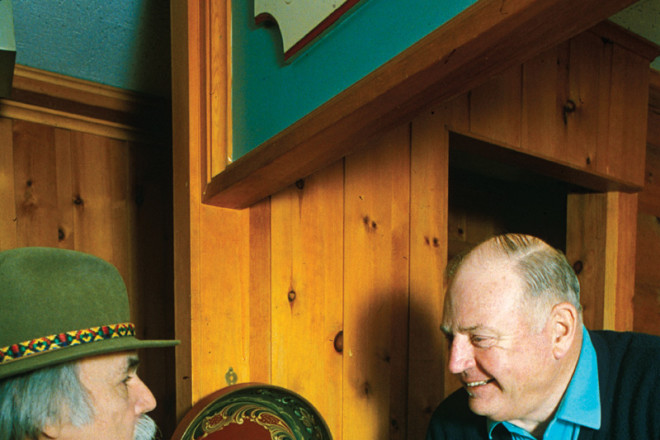 Norb Blei and Al Johnson at the breakfast counter of Johnson’s famed Sister Bay restaurant in 1994.

The restaurateur, WWII veteran, public servant, and grandfather to a village succumbed to complications from a pre-cancerous condition called Myelodysplastic Syndromes, a blood disorder. Standing alone, his first and last name were the epitome of ordinary. Put together, they were Door County royalty. Al Johnson.

His restaurant was one of northern Door County’s largest employers. Countless area kids paid for their college educations with paychecks earned beneath Al’s famous grass roof. When former workers fell on hard times, he found a place for them, even if they had once left on bad terms.

Dan Peterson worked for him for 25 years and now owns the Viking Grill in Ellison Bay.

“For all his funny ways and how hard he could get with people, he had a huge heart,” Peterson said. “He’s going to be missed by a lot of people.”

His staff benefitted from the kind of security and perks rarely seen in the restaurant or tourism industries, helping employees make a life and raise a family in Northern Door. The tips earned by his waitresses have long been the envy of colleagues at other establishments. Those workers have spread their income around the village and the county, filling bars with dirndls (to the delight of many a visitor), and spending on groceries, clothing, and homes. 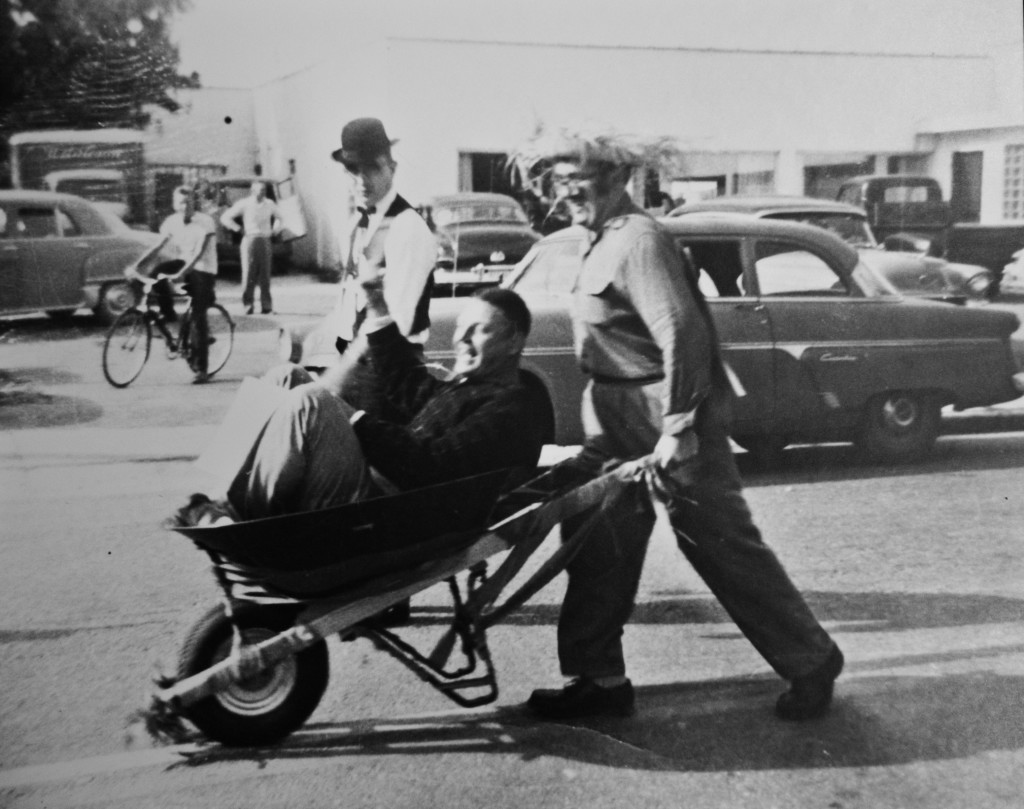 Dozens of marriages were forged and friendships formed under the grass roof. Talk at any length to someone who has known the Johnson family or worked at Al’s, and eventually you’ll hear a story about an act of kindness or generosity beyond what anyone would expect of their boss. Keeping the paychecks coming after an accident, taking back a former employee when they needed money or health insurance, or taking a kid to his first Packer game (in Al’s famously great seats).

But the impact of Al Johnson’s restaurant reached beyond his own staff.

Kevin Lind remembered the time Al saw him slip during a track meet as a high school sophomore. “Next thing I knew, I had a pair of cleats. He knew Mom couldn’t afford them.”

“He did not need recognition,” she said. “In his heart he knew he could make a difference in someone’s life. He was a man always willing to give back to others and his community.”

The fame of his restaurant benefitted the entire community. Hundreds of articles have been written about the restaurant, introducing hundreds of thousands of new visitors to Door County, where they came “to see the goats on the roof.” Other businesses thrive on the overflow from Al’s, from the customers who come just to see it, or who make Sister Bay an annual stop because of it.

In July and August, those goats cause a one-block traffic jam, as enamored visitors crane their necks out of car windows to get a glimpse of the goats. 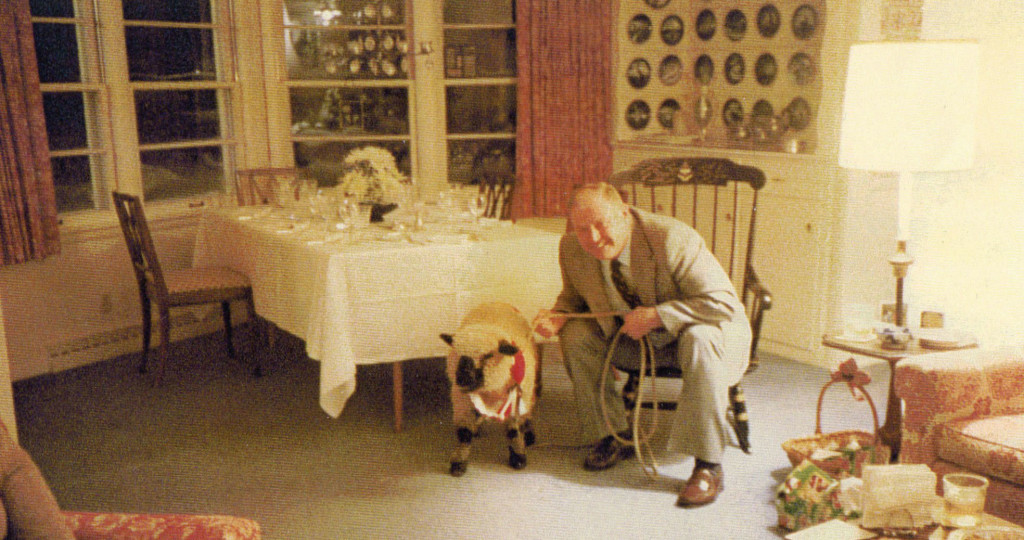 Al Johnson with one of many oddball pets given to him by Wink Larson over the years, one of which was his first goat.

Before achieving fame in Sister Bay, Al grew up on Chicago’s south side, the son of first-generation Swedish immigrants, who sent him to Door County to spend his summers. When he was six he was sent to Sweden to live for two years with his grandparents, who gave him a healthy dose of his Scandinavian heritage.

Al served in the 101st Airborne in World War II. He went to Marquette University but dropped out in 1949 (he later earned his degree) with “restaurant on the brain,” after catching the bug working for the late Johnny Vieth at Johnny’s Cottage Restaurant.

His goal, he once said, was to get people to talk about something other than Ephraim and to honor his Scandinavian heritage. Through the years he would serve his community as a village board member, school board member, police commissioner, and impassioned supporter of Gibraltar sports.

He opened his restaurant’s doors in 1949, quickly establishing a reputation in Sister Bay. But it would take a major step forward in 1960, when Al married Ingert Forsberg, who redecorated and added a Swedish Butik.

“Well, Ingert changed my life,” he once told Norb Blei in an interview. “The wildness stopped. She was absolutely instrumental in where we got with the restaurant.” 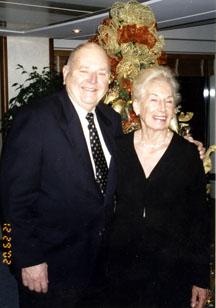 Al and Ingert Johnson married in 1960 and spent most of their years making sure their restaurant was perfect.

His final year was difficult as his health declined, but it was also filled with love and appreciation. Last August his employees organized a massive party to celebrate the 60th anniversary of his restaurant. Hundreds of employees past and present returned to thank a man who was more than a boss.

In April, the Sister Bay Village Board approved the purchase of Al Johnson’s Butik property, completing the vision of a public waterfront that Al had shared with other leaders 40 years earlier.

Till the end, Al was a presence at the restaurant. He held court at the counter with his old friends, where they “settled everything” at one time or another.

“A lot of Door County lore was created by the men at that table,” said Garey Bies, Wisconsin Assemblyman.

Al hosed down the sidewalks and parking lots, his attention to detail never wavering. And at the end of many days, he still counted the till.

There are a few names that rise above all others in Northern Door lore. Emma, Baldy, Chief, Norb, Winky, Earl, and the like. Northern Door’s one-name icons.

Al, perhaps, stood above them all.