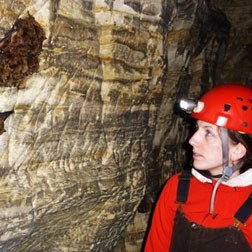 Bats are some of the most unique and ecologically beneficial animals in the world. In fact Jennifer Redell, cave and mine specialist with the Wisconsin DNR, says a recent study found that insect-eating bats represent the equivalent of $658 million to $1.5 billion in insect control services each year in Wisconsin alone.

Redell will present “The Importance of Bats & the Threat to Door County’s Population” on June 25 at 7 pm at the Baileys Harbor Town Hall. The program is part of The Ridges’ Lake Lessons.

Bats are the only mammals capable of true flight, and more than 1,200 species are found worldwide. The several species that inhabit Door County are currently the focus of research by multiple agencies. Last year white-nose syndrome, a fungal infection that is fatal to bats, was found at Horseshoe Bay Cave, which has the largest native bat population of any natural cave in the state. According to Redell, an estimated 1,250 bats hibernate there. Her presentation will focus on the threat of white-nose syndrome and include an update on the status of the county’s bat population.

Following the program, Redell will lead attendees in hands-on tracking of these flying mammals using an AnaBat detector. Admission to Lake Lessons is free. Donations are welcome.