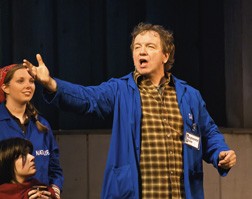 Expressive, talented Doug Mancheski will lead the cast of “Cheeseheads, the Musical” this fall at the Door Community Auditorium. Photo by Len Villano.

Can you imagine the hilarity that might have filled an NFL locker room if Doug Mancheski had pursued one of his youthful passions? And the problems that could have ensued? (Players doubled over with laughter would not have been too effective on the field.)

Mancheski loved football and played tight end and linebacker in high school in Green Bay and in college. When it became apparent that he wasn’t cut out to be a pro, he considered a career as a sports writer, but the pull of the theater was always there. At eight, he’d recruited kids from the neighborhood to appear in plays in his basement. His productions included versions of The Blob and Dark Shadows, vampire movies (with lots of ketchup!), and his special love, tornado themes, with all the electric fans he could amass going full blast.

He enjoyed appearing in a seventh-grade play, and at his all-boy high school, all the sport guys were in musicals.

“It was the only way we had to meet girls,” laughs Mancheski. But it was appearing in a college production that confirmed that American Folklore Theatre’s king of comedy belonged on stage.

“I was 19,” he recalls, “when I auditioned for She Stoops to Conquer at University of Wisconsin – Green Bay, and the director convinced me to transfer there. I studied with her for two years and was devastated when she left to teach elsewhere. But before she left, she encouraged me to audition for what was then the League of Professional Theatre Training Program in New York City. She was my inspiration. We all need a teacher like that to encourage us.” That teacher, by the way, was the renowned Gail Cronauer, now on the faculty of Collin College in Plano, Texas.

After the League program, Mancheski applied to New York University’s graduate theater program, which admitted very few undergraduates each year. He was one of three selected. In his third year, he was told that if he took two additional classes he could receive both a bachelor and master degree. He remembers it as a cutthroat program. “Of the 52 people I started with, only 15 graduated. All my good friends were cut, including some who turned out to be pretty successful.” It was a great time for making contacts in the theater world. One of his classmates was Diane Paulus, the director of Porgy and Bess that opened on Broadway in 2010.

After graduating from NYU, Mancheski spent two years in the New Actors Workshop with Paul Sills and Mike Nichols. “That was my real actor’s training,” he says.

He first came to Door County in 1992 with Blue Circle Theater, a bunch of New Actors graduates headed by Paulus. Sills was the artistic director. “Everyone but me eventually left the group,“ Doug says, “and we brought in new people to form Project 400, that lasted three years. We did a children’s workshop that culminated in a performance to Beethoven’s “Ode to Joy” on the Baileys Harbor beach, and a musical version of The Tempest at Björklunden.”

In 1994, Project 400 staged an avant-garde take on Frankenstein. (Mancheski improvised the tongue-in-cheek role of Frankenstein’s sex therapist.) By some quirk of fate, the show came to Door Community Auditorium, where it was viewed by a crowd of 40. But…one of those 40 was Fred Alley, who recognized a remarkable talent and asked Mancheski to work with him on a special project that evolved into Door Shakespeare, launched by American Folklore Theatre (AFT) as a sister company in 1995. He was with that troupe for two years, and a reviewer wrote: “A young man named Doug Mancheski stole the show three nights a week with his gleeful portrayal of Bottom in A Midsummer Night’s Dream.”

Mancheski returned to New York and initially turned down Fred’s invitation to join AFT. But in 1997, partly because his ailing dad hadn’t seen him perform for years, he said yes.

“Fred said I’d be taking over the role of Dirty Bob in Lumberjacks, created the year before by Lee Becker,” he recalls. “After I’d accepted the part, Fred FedExed me an AFT T-shirt and the lyrics for a new song called ‘Little Dress’ that would require me to do jetés and pirouettes in a lady’s petticoat.

“I was terrified. Door County was not New York City. People weren’t going to laugh at a man in a dress. Fred insisted it was part of the great tradition of English music hall theater. ‘You’ll get away with it,’ he said. ‘You won’t be embarrassed.’ As usual, Fred was right.”

And then, in 1998, Guys on Ice debuted in Ephraim’s Village Hall, and Marvin, the ice-fishing king, was born. If you’re among the tens of thousands who have seen the show, you’ll never forget Mancheski’s impersonation of Elvis or his amazing “healing” after eating fish, the miracle food. And if you didn’t see those bits of stage history, there’s no use trying to describe them. The play has been on AFT’s fall schedule a record five times. In 2001, the Madison Rep staged 29 performances with 27 sell-outs, making it one of the most popular shows in the theater’s 32-year history. Marvin and his buddy, Lloyd, most often played by Steve Koehler since Fred’s death in 2001, have fished all over Wisconsin in recent years, usually playing to sold-out houses.

In 2004, Doug was honored for his 500th performance in the show. Asked what he liked best about that long run, he said, “Working. Making a living is the number one coolest thing.” In the fall of 2011, Guys on Ice came to the Door Community Auditorium as part of AFT’s celebration of The Limitless Legacy of Fred Alley. By this time, Doug had played the role of Marvin more than 1,000 times. As reviewer Warren Gerds once said, “There’s never been anything like it around here – and onward it goes.”

Best known as a comedian, Doug is also a fine dramatic actor, evidenced particularly in Love Letters, a two-person play he’s performed many times. “That’s the type of work I was doing before AFT,” he says. “I’d like to do something serious every year.”

The speed with which Mancheski can memorize a role is legendary. Several years ago, Third Avenue Playhouse was preparing to stage The Belgian Detective when the male lead suffered a serious fall just before opening night. A frantic call was made to Mancheski, who was working in Milwaukee.

The script was faxed to him, and he looked it over as he drove to Sturgeon Bay. That night he appeared with a few cue cards in hand. The next night he played the part as though he’d been doing it for years.

Although the theater is Mancheski’s life, his interest in sports has never faded. He was one of the lucky fans who made the trip to Dallas to see his beloved Packers win the 2011 Super Bowl in the snow.

Doug confesses that he used to feel like the black sheep among his five siblings, whose occupations include doctor, lawyer and teacher. He was encouraged to discover a few years ago that, on his mother’s side, his ancestors included an aunt who sang with Milwaukee Opera, a distant cousin who was one of the first women in silent films, another cousin who played piano at Carnegie Hall and a great-great uncle who was in vaudeville.

“I was so encouraged to know it’s in the genes – that there was someone like me,” he says. Legions of theatergoers beg to differ, Doug. There is no one like you!